Is there any pitfall to using resistors in series AND parallel for an LED array?

I've seen a lot on LEDs and series vs parallel resistor usage, but found nothing regarding the combination of both, so here goes.

I am working on a watch of sorts, that will work similar to a 7-segment display, where different LEDs are lit simultaneously depending on the driver's output (sometimes 2, sometimes all 7), so I will use that as an example.

In order to conserve battery, I am looking to have a low brightness during "normal" operation, with a momentary high brightness option. Since this needs to be rather small to be wearable I am, of course, looking to minimize component count. Cost is relevant, but much less of a factor than attaining a small size that can be hand soldered.

It is widely understood that running parallel LEDs on a single resistor is not the best approach, and I have allowed for a resistor-per-LED arrangement in my design, but I would like to be able to bypass SOME of the resistance temporarily.

What I figured I could do is put the Resistor-LED series pairs in a parallel array that feeds to a single resistor with a bypass, as in this schematic: 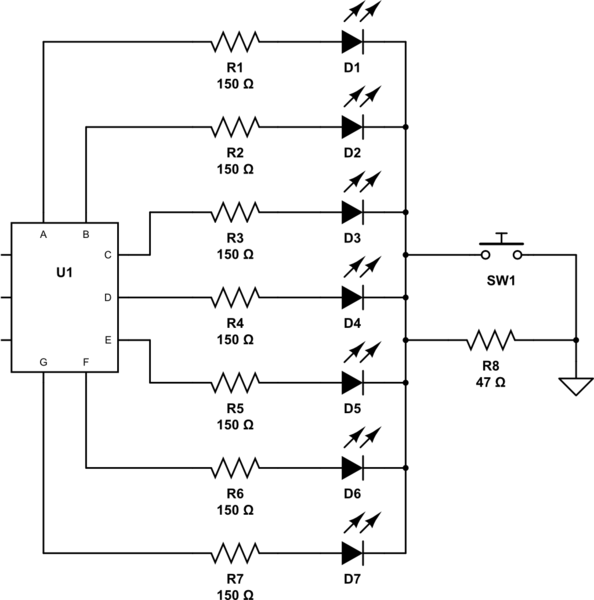 So, the question: Would placing a single resistor in series with a parallel LED array be as bad if the LEDs also had dedicated series resistors, and if so, are there other alternatives for the dim/bright outcome I am looking for?

Additional Info
- I am planning on a 3v (2xAAA) battery source running LEDs with a Vf of 2-2.2.
- Once I have my LEDs, I intend on testing different resistance values for brightness yield, but am hoping for around 2-4 and 7-10 mA for the low & high respectively.
- The actual array will have 12 LEDs, with a maximum of 9 lit at one time.
- There will be 4 "digit" arrays in total.
- I am comfortable working with SOIC and 0805 (and some 0603) packages.
- If there is a risk of (slightly) uneven brightness from one LED to the next, that will be ok, as it will give a "battle worn" look that will work with the design.

Your LEDs may or may not work exactly as you expect, depending on what you expect.

With the switch closed, any number of LEDs will have the same brightness. With the switch open, as you turn on more LEDs, those already on will get less bright.

If you eliminate R8, and PWM the LEDs, you can achieve a constant brightness change regardless of the number of LEDs lit.

A 3V battery is okay for red, orange yellow LEDs with lower forward voltages And not so well for white, blue and green. You might want to consider using a single rechargeable Lithium-ion cell which will increase the voltage to 3.6V. The discharge curve of a lithium cell remains above 3v until discharge cutoff.

Resistors do not work well for battery efficiency. The value of the current limiting resistor is chosen for a fixed voltage. As the battery voltage drops the efficiency will diminish, dimming the LEDs prematurely. The discharge curve of a AAA battery does not work well for LEDs that need to maintain their forward voltage.

A Constant Current Regulator (CCR) is the equivalent of a dynamic resistor that maintains the current irrespective of voltage.

The Microchip MIC2860 is a $0.25, 1mm x 2mm package, high efficiency LED driver which drives two LEDs at up to 30mA. This constant current regulator maintains the current with a dropout voltage of only 0.052 mV.

A resistor sets the maximum current, and the device will also optionally hold a brightness control value (32 levels) eliminating the need for a constant PWM dimming signal. When in standby the device draws only 0.01µA and will still hold the set brightness. It may also be controlled with PWM using the enable pin.

Your LEDs will work exactly as you expect. The series resistor will limit the parallel strings to a maximum current of A/n where N is really set by the individual resistors. The two sections will balance each other out at some current that's highly dependent on the forward voltage and forward current of all the LEDs. The theoretical current through is somewhat difficult to calculate, and the practical results will vary based on the actual Vf vs. If of the LEDs and battery voltage, of course.

One LED, if you don't eyeball it properly, may be brighter than the others, and even if they look the same, the If and resistor tolerances may mean one is at 9 mA while another at 6 mA. I've put multiple identical LEDs in parallel with one resistor. One looked brighter than the rest. I simply replaced it with one that matched the brightness of the others. Longevity and current matching wasn't important to a one off project.

As for alternatives, a microcontroller with PWM control of the LEDs and a push button for input will provide finer control and many more options. Many microcontrollers work off 2x AAA just fine, so at most you are adding one SMD IC and maybe a bypass 0.1 µF capacitor. Code is better than discrete logic, IMHO. Imagine chasing LEDs or patterns on top of whatever Battle Worn look you think of.

That's a fine design, partly because it forces you to get it right without the resistor in-circuit (i.e. in bright mode). Adding the resistor will simply lower the effective voltage to all the LEDs exactly the same.

Not every LED will respond the same way to that, so you may have unevenness in "dim" that you didn't have in "bright". That will only be a problem if the voltage-current curve of the LEDs are not the same.

If you could drive the LEDs from a SPI interface, the TLC5917 would solve your problem - and eliminate the series resistors. This device sets the current drive to all seven LEDs by a single resistor which could be switched to provide a change in brightness.

Not the answer you're looking for? Browse other questions tagged led resistors parallel series switching or ask your own question.

4
Single resistor powering multiple LEDs in parallel where current through resistor is lower than max allowed current for an individual LED
5
Parallel and Series Circuits Question (Electron Flow)
1
LED resistance calculation for combined Series/Parallel Configurations
0
For 12X8 LED array with any 1 LED glowing at a time, should we charlieplex or use 74HC595n?
0
One resistor in series and two in parallel for LEDs
1
LED series-parallel and parallel-series combination circuit
1
24V supply run 12V 3014 LED strip in series; help with resistors for series
0
LED light bulb in series or parallel?
0
Why does LED dim when adding second LED in parallel with a single resistor
0
Choosing Resistors for Brightness in Parallel LED Array