I have an earphone plug having four colored wires (gold, red, green, blue) and a jack with four connectors: 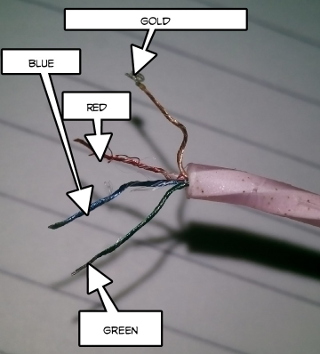 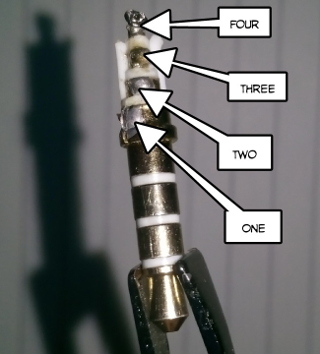 I need to know which colour should be soldered to which connector.

Color is not an indicator of which signal is carried. Use a multimeter to trace out the connections.

You can not rely on color codings. There may be standards but not every manufacturer may obey them.

This is how you test the correct wiring:

Asking how to use a multimeter, a signal generator or how a speaker works is beyond this question. Use the search function or a search engine. There are plenty resources out there.

Further, testing how non standard equipment works is beyond this question and should be a well defined, separate question.

Just found that, but as Passerby says, this is not a standard.

This should be used only as a hint to start testing.

Are you making an extension cable? If so, simply insert the plug into the jack and test continuity between each conductor and the various connections on the plug.

Solder each conductor to the connection that has continuity.

[Edit] I give a detailed description how to repair damaged headset connectors in another question. Terminate Headset Connector

Not the answer you're looking for? Browse other questions tagged audio soldering wiring colour colour-coding or ask your own question.

19
Resistors with ends of the same colour
11
What do the colors of resistor bodies mean?
2
Making a [4-Pole TRRS to 3.5mm Stereo & Mic Adapter (Male to 2x Female)] from an iphone headphone splitter jack?
33
How do media buttons on a plain wired headset work?
0
Extremely low volume on headphones after jack repair
0
Female mono jack connector 6.3mm
0
TRS connector for noice cancelling headphones has 5 wires inside cable, instead of 4