I am trying to tune a wideband transimpedance amplifier for maximum speed. I am experimenting with the OPA846 and OPA847 op amps which have large GBW but they are not unity gain stable with minimum noise gains of 7 and 12 respectively. 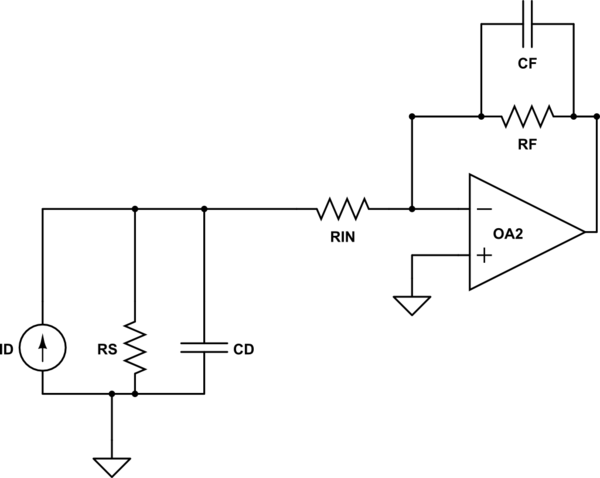 The current source with shunt resistance (~1Gohm) and capacitance (<1pF) is an APD in my case. The APD is one of the reasons I am able to explore such high frequency operation because it has very small shunt capacitance at <1pF.

Ignoring Rin, the noise gain has a zero at 1/(RF * CD) and a pole at 1/(RF * CF). The noise gain at high frequency is 1 + CD/CF and it needs to be greater than the op amp's minimum noise gain for stability.This is shown by the "Typical transimpedance application" curve in the bode plot below.

What are the pros/cons of adding a pole with RIN at 1/(RIN * CD) after the feedback pole 1/(RF * CF) and having a high frequency noise gain less than the recommended minimum? The idea is that the second pole in the noise gain would add stability when operating below the minimum noise gain where the op amp's open loop gain has a second pole. This is shown in the second noise gain curve in the bode plot. 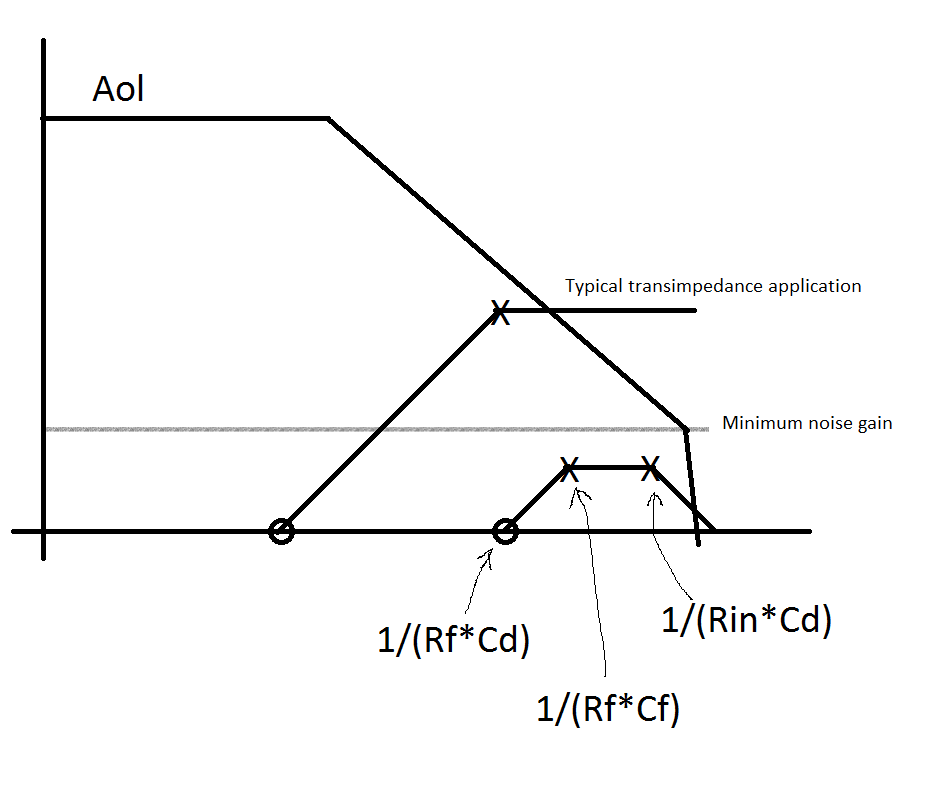 The only problems I can see is that there would be some current division between RIN and RS, but it would be very small since RS is very large. Also, RIN would add Johnson noise.

Has anyone seen this anywhere or done this before?

operational-amplifier analog stability high-speed transimpedance
Share
Improve this question
edited May 8 '17 at 23:19
DavidG25
asked May 7 '17 at 16:04

Increasing Rin will reduce your bandwidth - the division in current is between Rin and Cd. You're right in that it will improve stability.

To get good performance I would recommend reading the book by Phil Hobbs. You can find out more at his web site. (http://electrooptical.net

Not the answer you're looking for? Browse other questions tagged operational-amplifier analog stability high-speed transimpedance or ask your own question.