Ask Question
Asked 3 years ago
Active 3 years ago
Viewed 1k times
3
\$\begingroup\$
Closed. This question needs to be more focused. It is not currently accepting answers.

I have recently started playing with Arduino, as well as electronics in general. This means I am a complete noob. I needed some resistors for a project, so I ordered a variety pack. I emptied the packs into a parts organizer. I put the pack I ordered into separate drawers in order. Once I did that, I started putting other resistors I had into the drawers. This is where my question is. I have a bunch of 220 ohm resistors. Some came from the Arduino pack, and some from the pack I ordered. I have a number of 200 ohm resistors, from somewhere I dont remember.

Is there a big enough difference to separate the 200 ohm from the 220? Or are they "close enough" that it doesnt matter? Does this apply to every resistor that is "close"? Another example is I have 2k and 2.2k resitors.

It matters when it matters, and doesn't when it doesn't. That's not much of an answer, but that's the simple truth. It depends, and sometimes, it does in fact matter, and other times, it doesn't.

They're actually determined by approximate geometric sequences called the E-series of preferred numbers.

They're a slight variation on the Renard series of preferred numbers. Basically, it's a series that subdivides a power of 10 into a certain number of steps, and any two adjacent steps have a roughly constant ratio.

What's the point of all this?

Error. Subdividing powers of 10 into these fixed ratio geometric sequences results in values that minimize relative error for any given value. So these values are chosen because they are always going to minimize how far off an arbitrary resistance value will be from the limited available values that are manufactured.

What does this have to do with your 200 vs 220 resistor question? Everything, actually. There are several E series, each one with different numbers of subdivisions. The roughest is E6 (with 6 divisions), then there is E12, E24, E48, E96, and even E192. These numbers of subdivisions are not chosen arbitrarily.

They match up to resistor tolerance. Adjacent E6 values require resistors of at least 20% tolerance or better for subdivisions of that granularity to matter. Above 20%, and two adjacent values will overlap due to the wide tolerance window, and then, as you say, they're "close enough" and the difference is not very meaningful anymore.

So, at least from the standpoint of the math, unless you have 10% tolerance resistors, 220Ω and 200Ω resistors are, in fact, not 'close enough'. The difference is real and measurable. Now, for many usage cases, you can definitely just plop in either of those resistors when a schematic calls for the other. There are also cases where you can't, or at least, doing so will result in something having 10% error (like, for example, the output of an adjustable voltage regulator. Given that most chips have a voltage range of ±5%, such a large error could be potentially destructive).

That said, I totally just have a drawer labeled '220Ω' that secretly has a bunch of different values somewhere between 200Ω and 220Ω. Then I do that thing everyone hates and actually figure out the resistor color code and pick the one I actually want.

As for SMD resistors, I never mix these in the same drawer/cubby/spot. 0402 won't even have any markings, and 0603+ often have weird markings that aren't any kind of resistance value, and include letters. Maybe it's hex? Cyrillic? I don't know. I try to avoid reading SMD part markings as much as I can.

You didn't ask, but I recommend these for through hole or larger component organization. You can use a label maker to label them, and they have 64 drawers per unit.

As for SMD components, I will put different sizes but the same value (so 0805, 0603, 0402 1K resistors would all get lumped together), and I use a couple of these 144 cubbies of organizational excellence. The multiple of 6 numbers make them perfectly suited for E Series values too! 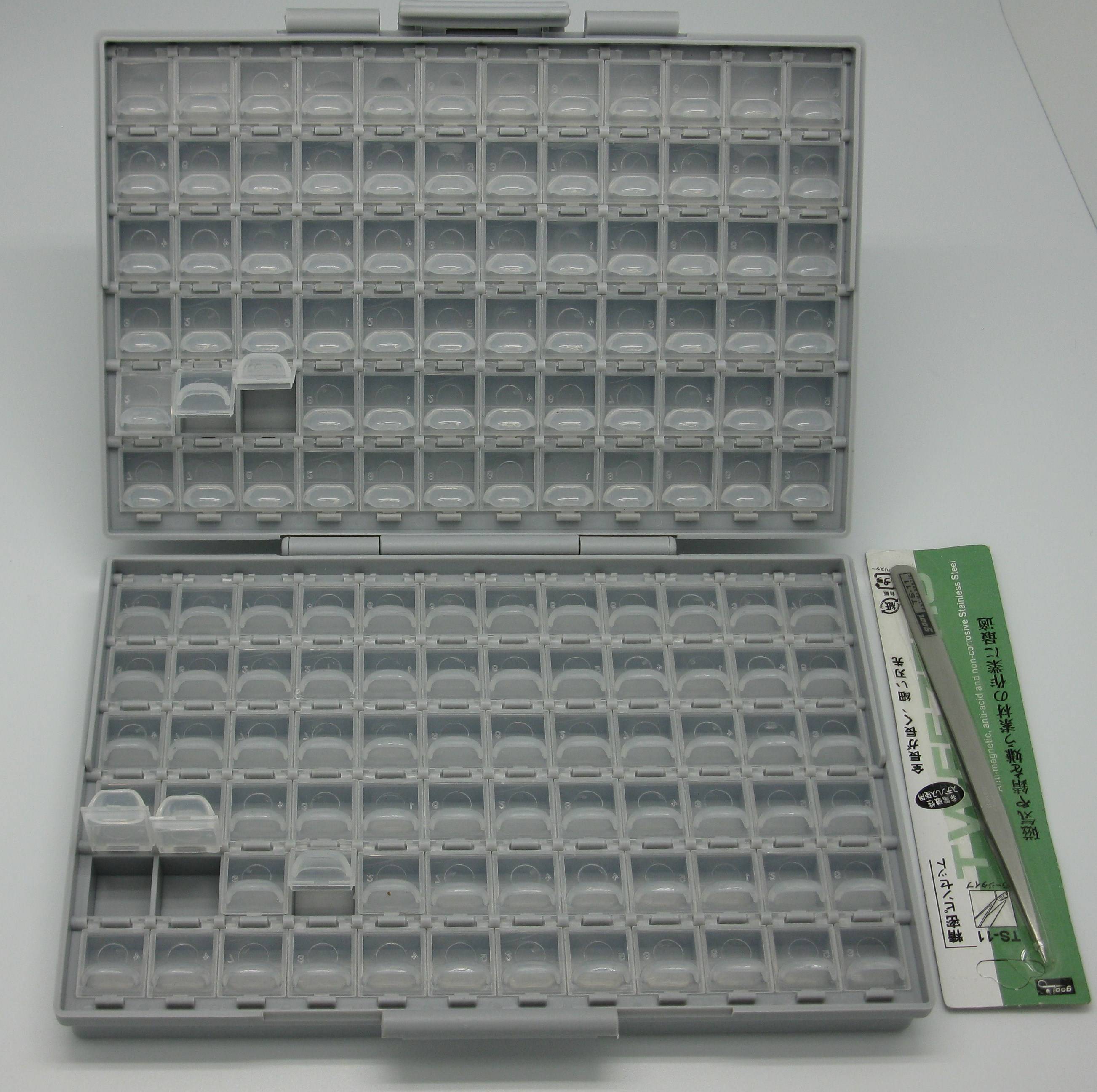 They are seriously life changing. LIFE CHANGING. I love mine. I think there are also some clones of it that are a bit cheaper, but I've simply linked the brand I have (and thus can personally vouch for).

I stopped using the little drawers, they're just annoying.

For SMD ICs and other parts, I use 10x15cm photo albums like so: 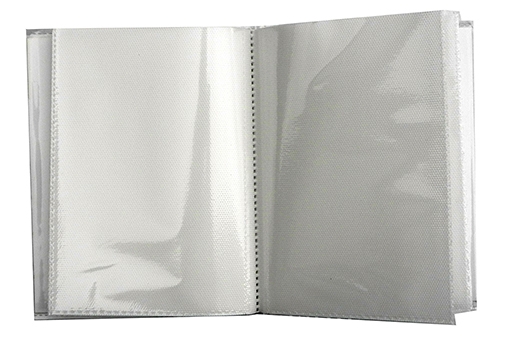 A DigiKey/Mouser bag fits perfectly inside the plastic pockets, and the label is visible. It is perfect! I don't use any order. Instead I keep a spreadsheet along, so I can Ctrl-F a chip name, and I instantly know in which binder/page it is.

For thru-hole ICs, I cut antistatic foam in A4 paper size, slip than inside A4 transparent sleeves and put them in a binder. So, for example I have a foam sheet full of opamps, and my spreadsheet says "NE5532 is in top left corner of page 2".

For passives, the system is even simpler. I have plastic shoeboxes in which I put cardboard cards with the values printed on them, in order, just like a stack of photos. I flip through them with a finger and drop the Mouser bag in the proper spot. It is easy to insert values in the sequence, and easy to find them since they are sorted.

If you are a seasoned professional, you will have needs for power WW resistors all the way to 0.01% R networks for ratio gains that must be paired for differential amps with excellent matching to retain high balancing for common mode rejection ratio (CMRR) in high gain diff amps.

You cannot design a precision regulator where a 1% regulated voltage depends on the ratio of 0.5% parts with a precision Vref.

You needs will vary, but a kit of 1% standard parts may last you for a long time.

For bandoliered resistors (paper strip holding them together), I write the value on the bandolier then store the resistors in component drawers like this one from RS. Each drawer is labelled to cover an order of magnitude (<10R, <100R, <1K, <10K, <100K, <1M etc, and the drawer is split into three compartments, with smallest values in the back (e.g. 10K to 20K), middle in the middle (22K-47K) and largest at the front.

It works well for me for general purpose resistors for prototyping (for larger quantities each one gets its own drawer). It doesn't take up much space and is quite fast to find a suitable resistor or quickly choose an alternative value.

2
Voltage Divider
6
Using multiple resistors on a breadboard to limit voltage to LED
1
How do I select the Correct Diodes and Resistors for my LEDs?
0
Connecting a parallel port to an Arduino
5
Why must resistors be on the respective anode terminals instead of the common cathode terminal of a RGB LED?
1
Question on Resistors for use with 5050 LED Strips
1
Could a 220 V wire shock me if I hold a 4 band Orange Red Orange Violet resistor in series?
0
Is it 'safe' to use 200ohm resistor to reduce 9v to 5v
0
How to build a digital potentiometer with standard value resitors and MOSFETs?