Is there a minimum mosfet drain current?

I can use a parallel resistor to increase the current through the mosfet, but I'd like to know if I can get away with not doing that.

There is no minimum drain current.

However, the MOSFET has a leakage current which will flow even if it is off. If your load is on with only 25nA, then you might have trouble turning it off.

Also, when you turn the MOSFET off, its parasitic capacitances still exist. So, if Vgs=0 from the MOSFET driver, you still have Cgd+Cds caps which have Vds=0V across them. Current going through the load will need to charges these capacitances, until Vgs reaches the same value of the power supply and there is now 0V across the load...

So yes, you might need to put a resistor across your load, or use a push/pull drive (ie, two transistors, one to power the load, and the other to short it to turn it off and discharge capacitances). If you use low voltage, the output of a simple logic gate will do.

This started as a comment but got too big...

As @peufeu says you will have a hard time finding a discrete MOSFET whose datasheet guarantees such low off state leakage. Smaller area, and hence higher Ron devices will tend to have lower leakage.

Using a solid state relay (a.k.a. opto-relay), which internally uses a pair MOSFETS as the switch devices, you can find components that will guarantee the leakage is less that 25nA. However, opto-relays will be slow so don't use this for switching fatser than about 1 kHz (see the opto-relay's data sheet). If have a connection to VDD use the approach below.

If VDD - VSS is about 18 V or less, don't use discrete FETs, use a logic device, the CD family devices will handle 18V and for lower voltages use a more recent family. Otherwise, use discrete devices.

If VDD - VSS is greater than the gate breakdown of your FETS (20 V is typical) or greater than the logic swing of the driver, you will have to use separate the gate signals and level shift the gate drive to the PMOS device. Low to medium speed (<1 MHz) level shifters using resistors or resistors and a matched pnp BJT pair only require a few components and won't burn too much power (unless VDD-VSS is high). 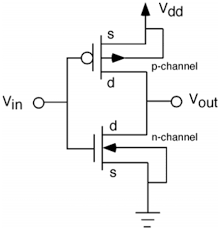