I have this setup where a PIR sensor (HC-SR501) powers an LED strip with the help of a P2N2222 transistor. 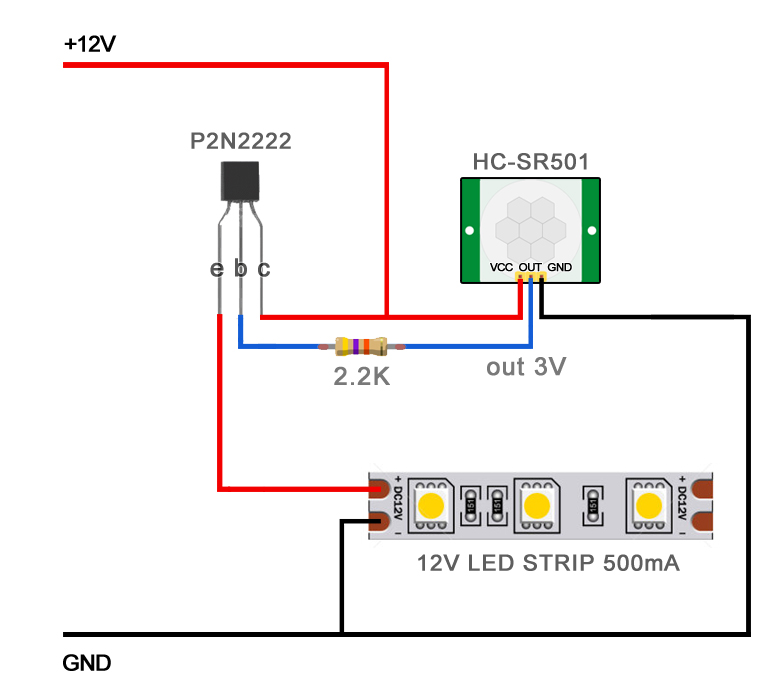 I then manually connected the Transistor base to the 12v rail and it has no problem powering the LED strip. I have also tried changing the 2.2K ohm resistor with a 100 ohm and still the PIR sensor doesn't trigger the transistor. I have tried powering a 3.4V 8mm LED from the PIR sensors OUT pin and it works fine, so the sensor's OUT pin is giving the 3.3V. Is it not enough for the transistor base?

What am I doing wrong here? Please advice.

Your problem is that the transistor is on the high side, and you're only giving it 3.3V on the base. Since your base-emitter junction must have approximately 600mV across it in order for current to flow from collector to emitter, your transistor is unable to have anything higher than 3.3V - 0.6V = 2.7V at the emitter, which isn't enough to turn on your LEDs. 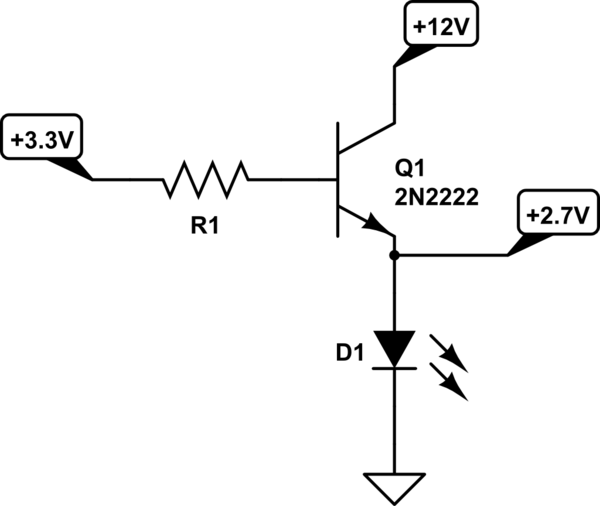 A better way to do it is as follows: 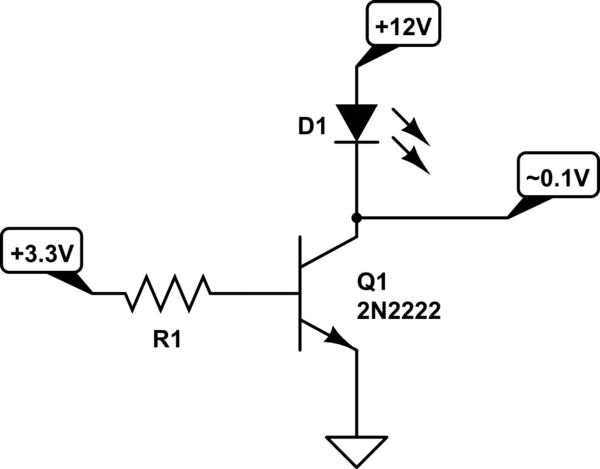 This way, the transistor has its emitter connected directly to ground, so the transistor can enter saturation when the signal is at its high level, and the transistor will have a low voltage drop (around a hundred millivolts) from collector to emitter. This means that you'll have almost 12V across your LED module, enough to power it.

Now, up to this point, I've been assuming the transistor had a high β (aka hFE) at the operational current, which as Tony Stewart in the comments pointed out, is not correct. The 2N2222 is only going to have a β of around 30 or less at 500mA, meaning that it will be in forward-active mode and not saturation. Transistors in forward-active mode have a higher voltage drop between collector and emitter, meaning higher power losses, than when in saturation mode. Now, one obvious solution here is to increase β, which you can do like this: 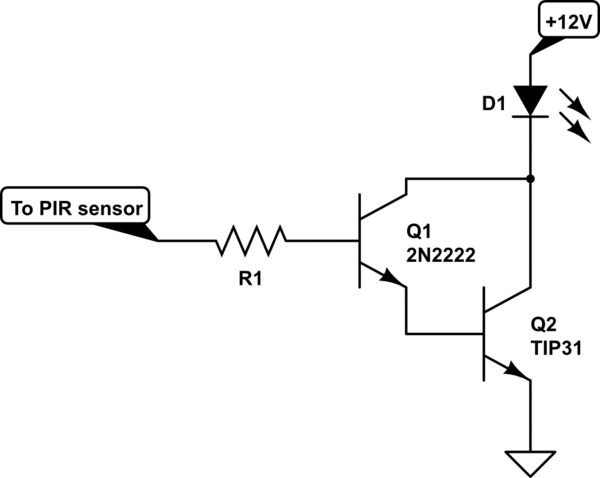 This configuration is called a Darlington pair. Q2, here, is a TIP31 transistor rather than another 2N2222 for power-handling capability; Q2 is dissipating significantly more power than Q1, so it should ideally be a higher-rated transistor. Using a second 2N2222 may work, but a TIP31 is more suitable for the task.

Alternatively, you might want to look at Tony Stewart's answer below; his circuit is not quite so simple and requires the use of a MOSFET (which you mention having difficulty getting in small quantity), but has some marked advantages over the ones presented in this answer, such as lower power losses when presented with higher input voltages.

If you examine the HC-SR501 schematic, datasheet, you will notice it says 3.3V TTL compatible logic level output yet adds 1K series R (for ESD protection), thus not True TTL output impedance with positive logic 1= detected human. So these two criteria , you must use an inverting FET switch with low side switching (-) to make it non-inverting , i.e. LED on with input high.

Not the answer you're looking for? Browse other questions tagged led transistors motion pir or ask your own question.