Asked here because EE's are familiar with concepts of rotating vectors...
Have as input inside a microcontroller, two signed numbers which correspond to rectangular coordinates. These numbers are related as the two rectangular components: a real and imaginary similar to R + jI. 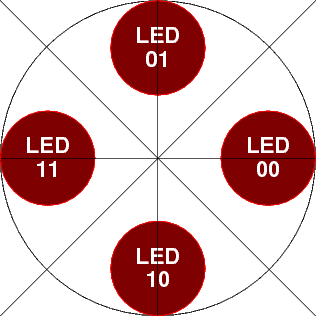 Intend to have as output a display on four similar LEDs which would be interpreted by eye to indicate a vector angle...similar to atan2(real,imaginary). Light intensity will be done via Pulse-width-modulation (PWM). For example an input of (140,0) would light up LED 00 fully, while the other three would be off. An input of (38,0) would display similar full brightness on LED 00, since the display is for angle, not amplitude.
Symmetry reduces the full circle into eight similar segments. It is obvious that at 0, 90, 180 and 270 degrees, only one-of-four LEDs should be fully lit with 100% PWM. And at 45, 135,225,315 degrees, two adjacent LEDs should be partially lit an equal amount.
But lit how much? relative to full 100% PWM.
Should it be 50%/50%? Should it be \$ \frac{100}{\sqrt{2}} \$%/\$\frac{100}{\sqrt{2}} \$%?
Probing into intensity perception of human eye presents a morass of scenarios, each of which has a different non-linear transfer function between input and perceived brightness. It is unclear to me which scenario applies here.

Display update rates will be close to, or just past persistence-of-vision, in the 20-40 Hz area. Background would be darker than LEDs, and LEDs would be observed directly.
Edit - added goals:
I hope to discern whether a vector rotates clockwise vs counterclockwise - it will be rotating quite slowly (period of one second or far more), but in a potentially noisy environment (phase noise). At some point, a PLL will be applied, and the vector should settle near LED00. This PLL will have a l-o-n-g time constant. I would be happy to be able to tell if it is locked in the presence of noise.

At angles 45,135,225,315, PWM for two-of-four adjacent LEDs should be ???, considering the crazy erratic intensity perception of human eyes? Once nailed, I can probably work out a sane transition for intermediate angles (0-45 degrees).

Yes, we generally model perceived brightness to be logarithmic to irradiation. That doesn't mean the base of that logarithm is known for any color, for any human.

It also isn't clear that at the very low end of your PWM duty cycle, this will really be a sufficient model; so, I'm afraid, you'll have to do some characterization yourself, if you want to do this "properly".

Luckily, I think that if you're aiming for direction visualization with four LEDs of which you at most use 2 at the same time, you won't lose much "perceived accuracy" if you just try out one or two exponents, and settle for one that you deem "good enough". No magic involved, just try it out.

Even though eye has a dynamic range of > 140 dB from <1LUX to the sun of >100k LUX this requires long latency for iris modulation a scotopic settling time for the eyes to adjust.

Ambient Glare off the glass can be 1 IRE more or less depending on room light.

So you want your LEDs to be linear current sharing for intensity.

But considering then eye speed is less than your possible dynamic load changes and thus PWM changes, I would opt to define 16 sectors of constant intensity for SPACIAL acuity recognition over trying to interpret changing quadrant intensities.

Not the answer you're looking for? Browse other questions tagged led pwm display or ask your own question.

2
Simple solution for driving a large-ish RGB LED array with PWM
0
PWM with Oscillator does not dim LED display as expected
0
Light intensity is dropping on large LED bulb display when it sequences
3
Human perceived (relative) brightness of indicator LEDs
9
Can bright LEDs cause eye damage even if they are dimmed with PWM?
0
Driving two parallel LEDs with PWM brightness control and an "LED selection" signal
1
Designing a Arduino based circuit to power standard and RGB LEDs
0
How does one calculate the spectral irradiance from an array of IR LEDs?
0
LED intensity issues on Attiny85 with 74HC595 to control 8 LEDs