I'm planning to buy lights for my planted aquarium tank. After a small research I found that regular lights are not suited for growing plants. Beacuse they need BLUE for Leaf Growth and RED for Stem Elongation. In stores I found 2 variants of this lights. One was actually a combination of both the LED's and other was simply called Full Spectrum LED. Can any one please suggest me which one is good for my 6 gallon tank?

None of the above.

You do NOT want Full Spectrum, UV, IR, Far Red, Only White or anything besides Deep Red and Deep Blue. Red White and Blue is always a safe bet. Red and Blue come way before white. White (aka Full Spectrum) is more like supplemental.

I do some consulting work regarding grow lights and design for the University of Florida Horticulture LED Research. I asked Professor Dr. T.A. Colquhoun who leads LED research at UF, "What colors would you recommend for a grow light?" and he replied "Deep Blue and Deep Red have always worked well for us".

If you want some validity Google "thomas a colquhoun led".

The results of nearly every study ever done on growing with LEDs is Deep Red and Deep Blue worked well.

It's all about the Action and Absorption Spectrum of Photosynthesis and its Quantum Yield.

If you care to know more about chloroplast, types of chlorophyll, carotenoids read this: Photosynthetic Pigments 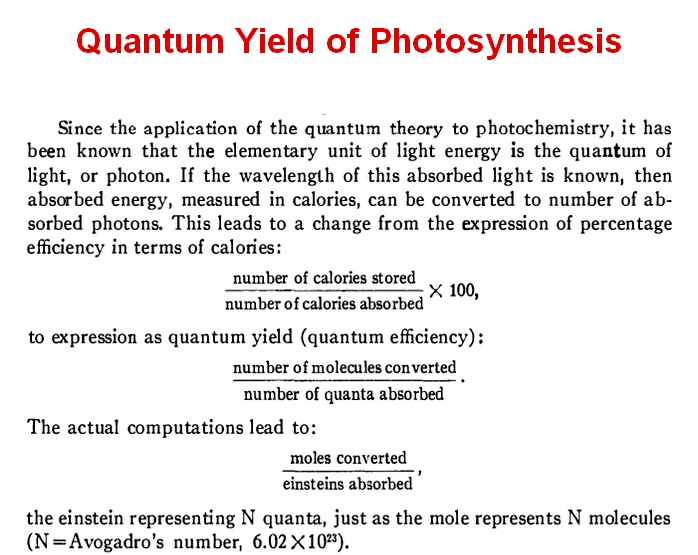 When you buy a grow light you want the most bang for the buck. The bottom half of the above chart clearly shows the Photosynthesis Rate is highest with Deep Blue and Deep Red. That is where you put your money.

The seminal paper describing the action spectra for 22 plant species was published by KJ McCree in 1972. This work was originally done in order to provide an accurate definition of PAR. McCree defined the efficiency or quantum yield of CO2 assimilation as a function of color wavelengths in 22 plant species.

When getting advice from websites that refer to studies regarding UV, IR, and Far Red, beware of the difference between photosynthesis and phytochrome mediated responses. For grow lights photosynthesis is the important thing. Many studies now use various colors to signal specific plant response.

UV in grow lights? UV is commonly used to kill living things. Its use requires some know how.

Since 1972 this paper has stood up to extensive peer review. It still holds true today.

Shopping for grow lights is a nightmare. It's the blind leading the blind out there. One of my pet peeves is the use of Watts when selling grow lights.

When reading Reviews of LED grow fixtures, I often see the term Watt used. Misused more than Used. When someone uses the term “True Watts”, I know they do not know. There is no such thing as a True Watt. True Watt is a marketing term. As with most marketing terms that use the word true or truth, it is neither.

An LED grow fixture has many Watts.

If there were a Watt of importance it would be the Wall Watt. The main criteria for the evaluation of a grow fixture is how much electricity goes in, and how much light comes out. In this evaluation the amount of electricity is typically specified in Joules, as in PPF per Joule, not Watts. Although that is just technical you can look at it as PPF/Watt.

Although PPF is also unimportant. PPFD, that is what is important when it comes to grow lighting. It has become apparent there are very few that understand PPF and PPFD.

The “F” in PPF and PPFD stands for Flux.. Flux is a measurement unit when measuring Energy per unit of Time and or Volume and or Area.

Energy takes many forms in a grow fixture:

Each form of Energy listed above there are many more measures. Volume, Density, Intensity, Illuminance, Irradiance/Illuminance, and Radiance/Luminance.

I could explain each one, but no one would remember. There is only one that is important to grow lighting: Photon Radiance measured in: moles/m2/sec. Or how much light reaches the plant.

Photon Radiance is the number of photons (moles) hitting (incident) a surface area (m2) in a given amount of time (seconds).

PPFD (Photosynthetic Photon Flux Density), is a measurement of Radiance, not Density. Why is it called Density? Because someone didn't think this lighting measurement was confusing enough? No, it is more likely someone was already confused enough that they used the term Density where it was actually Radiance. Happens all the time.

As Watts relate to LED grow lighting, the Electrical, Thermal, and Radiant Watts are too dynamic to be meaningful in the evaluation of a grow fixture.

The Electrical Watts are divided in to a ratio of Thermal and Radiant Watts. A lighting electrical engineer will choose an efficient LED, with good efficacy, with the highest Radiance Watt to Thermal Watt ratio.

The problem with Lumens is it not only irrelevant to photosynthesis, higher Lumens often means less PAR. A light source with high lumens may very well be the worst choice for grow lighting.

An LED can radiate more PAR and have less lumens when compared to another LED.

The following image shows an LED Luminous Flux in lumens. 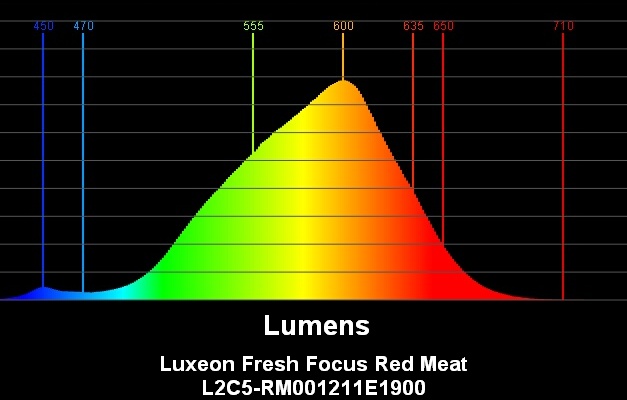 The following LED looks PERFECT for an LED grow light.

Plenty of Deep Red with a perfect ratio between Red and Blue for most plants. 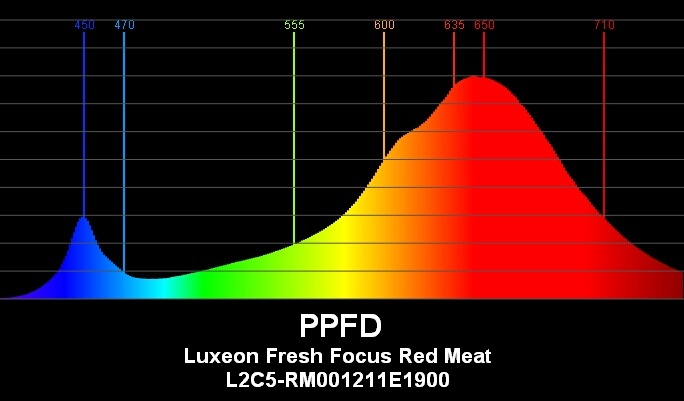 The difference between the above two images is:

They are the SAME LED!

Lumens overemphasizes Green and de-emphasizes Blue and Red. Just the opposite of what is important in grow lighting.

As shown above, Deep Blue and Deep Red are the most efficient colors for photosynthesis. But are under emphasized in lumen calculations.

The human eye is much more sensitive to green than red or blue. Lumens is a calculation of human sensitivity to light at each visual wavelength. Lumens is not a measurement of light as in the measurement of photons.

Lumens is a calculation that takes the measurement of photons and the actual wavelengths are multiplied by a factor as determined by CIE (International Commission on Illumination).

General illumination lighting is a $75 Billion market, so LED datasheets are photometrically oriented for this market. Typical LED emitted visual light in datasheets are Lumens, Lux ,and Candella. When the LED's lightwave spectra is not all visible to the human eye milliWatts (mW) are used. This presents a problem in horticulture lighting as Red, White, and Blue LEDs are specified in Lumens and Deep Red, Far Red, and Royal Blue in mW.

Radiometry is the study of optical radiation of light, ultraviolet radiation, and infrared radiation. Radiometric is a measurement of the actual flux emitted from the light source.

Photometry, is about human optical visual response to light (luminous spectral response). Photometric is a measurement of the flux emitted from the light source and then adjusted for its sensitivity to the human eye. Photometric measurements only includes light visible to humans. The human eye is most sensitive to green at a wavelength of 555nm (Lime Green) as determined by the .CIE (International Commission on Illumination). This 555nm wavelength is the international photometric standard to which all other wavelengths are compared.

Photonics measures light as quantum particles called photons. Photons are elementary particles of light which carry light's electromagnetic force. Photons, travel in straight lines at the speed of light, and carry a fixed amount of energy. Photons have two distinguishing characteristics, direction and wavelength. Photons are a quantum measurement of light particle energy measured in the quantity of photons per second. Typically measured with some sort of photon detector which counts the number of photons that hit the detector's surface within a period of time.

To compare the actual (not perceived) amount of light being radiated by two LEDs of different wavelengths you must consider the the luminous efficacy which overemphasizes the actual radiated flux.

The perceived brightness, or luminous efficacy, of light is technically specified by the International Commission on Illumination (CIE). Each wavelength efficacy is related to a wavelength of 555nm (Lime Green). 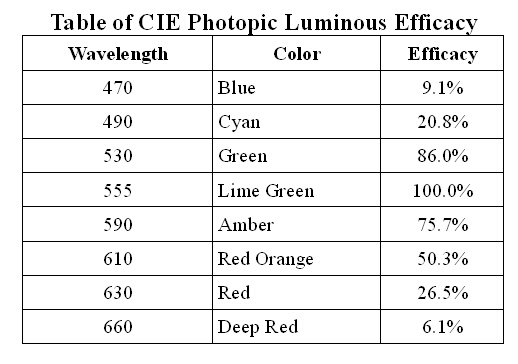 To convert other colors to the 555nm equivalent output flux, multiply the LED's published lumens by the reciprocal of the CIE factor. 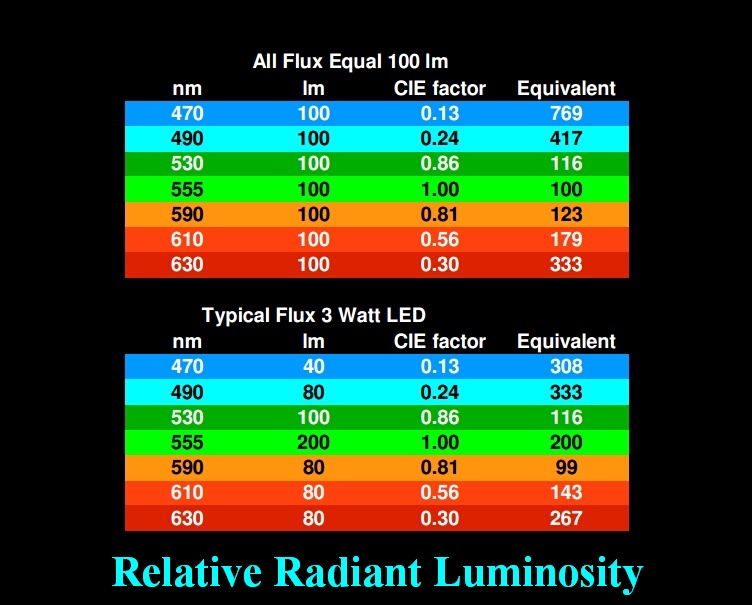 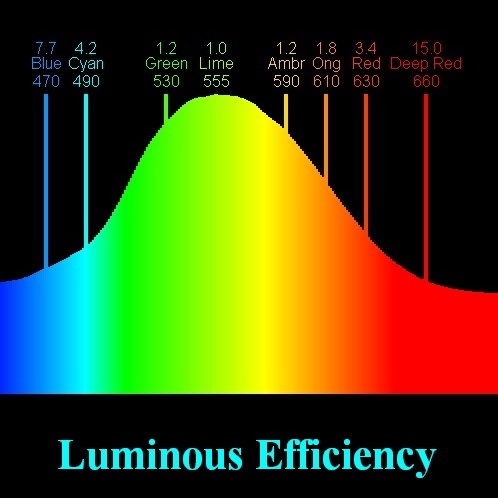 The top number is the reciprocal of the CIE efficacy.

Contrary to the accepted answer...

Plants are able to sense and respond to a broad range of the spectrum, spanning from UV-C (260 nm) to the far-red (720–780 nm) regions. Combinations of wavebands in the incident light mixture effect plant growth, development, metabolism and morphology (Folta and Carvalho, 2015)

This is very important to enhance specific flavor, chemicals in herbs and other factors like anti-oxidants, mosquito repellents etc.

For the core wavelengths for growth almost as good as sunlight are RB and G is reflected since that is what we see. But in some plants green is essential, others UV is helpful and others IR is very important as well as leaf temperature.

Choosing a grow lamp depends on specific plant genetic specifications. Unless specifically researched for a specific plant gene and personal experience, you are probably better off with reflected sunlight. Many factors simulating the daily cycle of light and shift in spectrum are critical to some species.

No great answer is possible, since there is NO SPEC. or specific application.

That article shows several colours being used other then deep red and deep blue,I’ve been using 50w from wall to full spectrum driverless cob chip 110v and there bright and definitely work great with my plants,I still love my energy sucking high pressure sodium I like using them in combo together but I also have two led grow fixtures from amazon one is blue,red other is blue,red,white and there good for clones and seedlings that’s aboot it...personally driverless cobs are where it’s at if you want to build your own strong bright fixture screw spending thousands if you know any basic electrical work you can build a driverless cob fixture Np 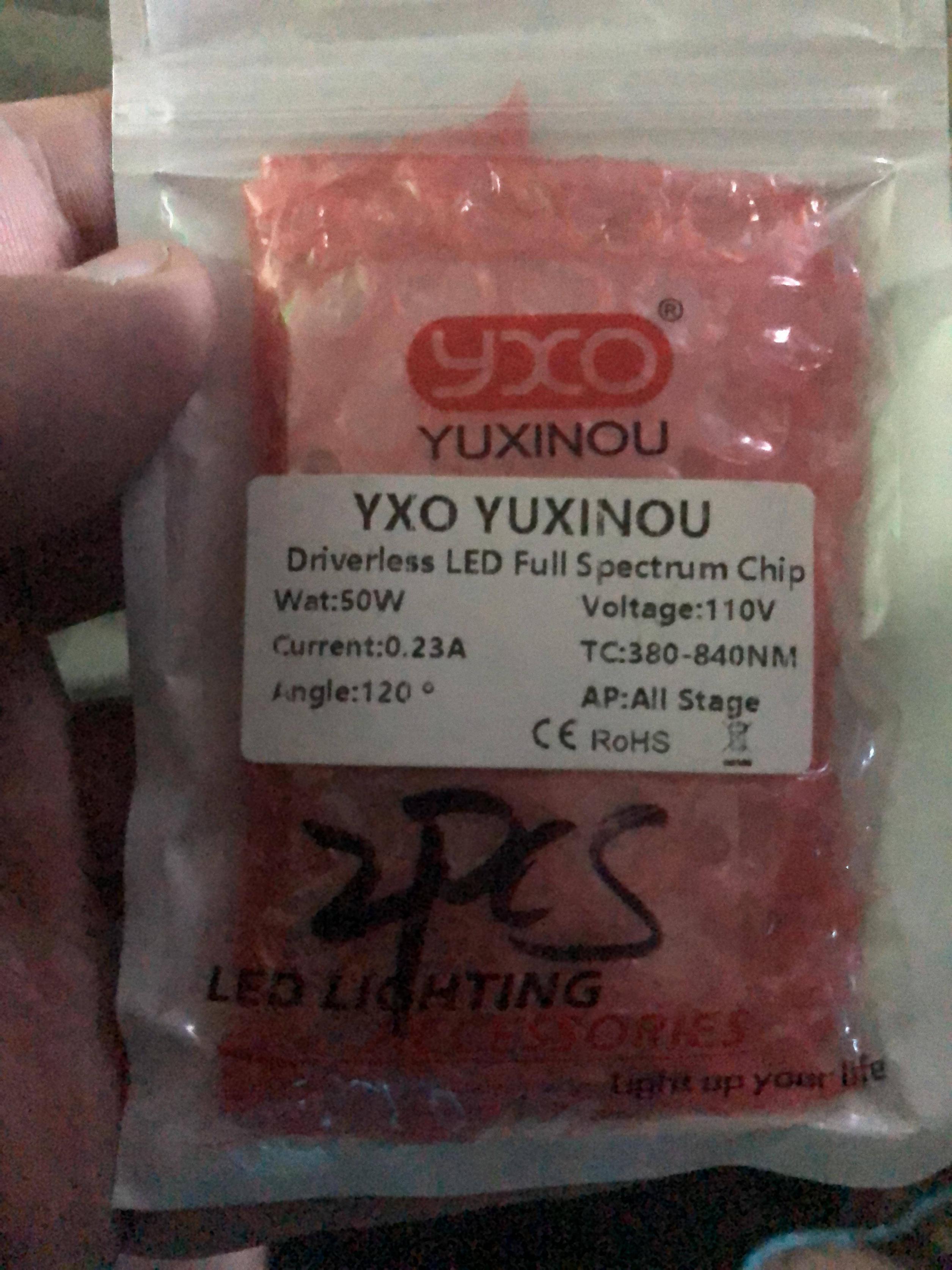 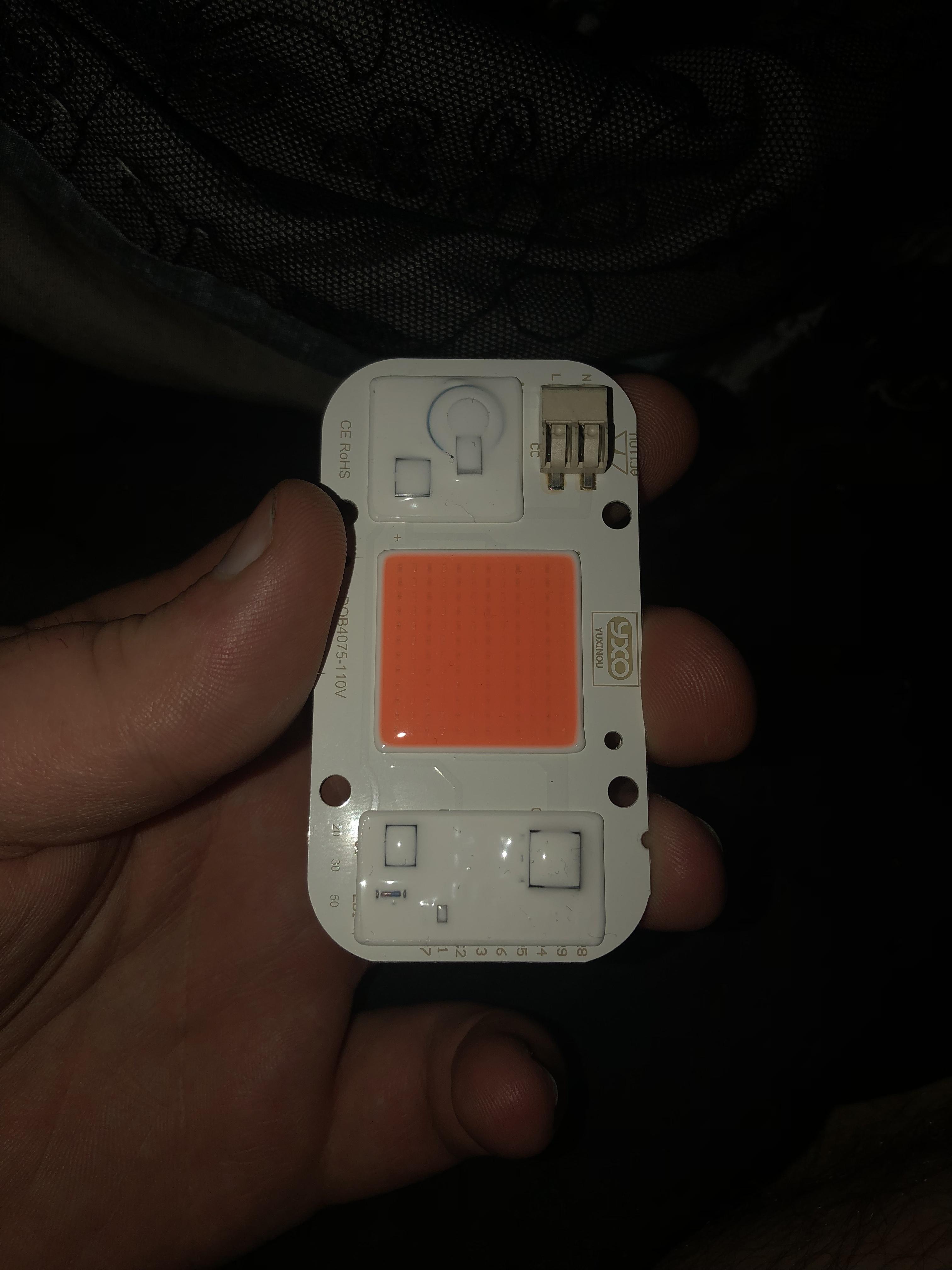 Without accurate spectral plots of Lumens I would say 14W is less power than 10x 3W but then you have to design and build a heatsink , connector and mounting assy.

so the 14W bulb is easier, but if buying in bulk design a good Alum-Clad PCB with 10x3W and at least 3cmx3cm per 3W LED

A slight frame challenge: Red + Blue plant lights can be better where "better" means more efficient. As long as your white light includes those red and blue bands your plants should grow perfectly well, you're just "wasting" energy on the green wavelengths the plants don't so much need.

Presumably your fairly small tank is mainly for aesthetics and not some industrial growing operation. I'd go with wasting a couple watts with the white lights and having your plants look the way you expect instead of the purple lights making it the room look like a disco and making all your green plants look black.

Not the answer you're looking for? Browse other questions tagged led light led-driver spectrum lighting or ask your own question.

10
Red Green Blue LED
5
LED lighting with incandescent spectrum?
1
Red light therapy LED spotlight
1
How to generate Red light from a Blue-Dominated Spectrum
4
Cool White LED bulbs: Are they "full-spectrum"?
5
Do standard white LEDs produce a full spectrum of light?
5
How Is Intensity of Blue Light Measured?
2
Off grid LED solar lighting without batteries
0
Red laser that has a higher power output at 400nm than 623nm?