I am trying to determine the formula for an audio taper (logarithmic) pot.

I would like a formula that takes R and P as inputs. R being the total resistance and P being the "percent on", i.e., in set [0, 100], and yields the resistance between the middle terminal and one of the outside terminals.

Can someone provide a purely mathematical answer, not a lookup table or anything.

I am trying to plot frequency ranges for a 555 timing chip in astable mode.

Again, I am looking for the formula, not how to plot it or a look up chart. Just math! :)

I have been thinking that this may be it. I am looking for what number raised to 10 (the number of degrees I want) will equal my total resistance.

If I want to find the resistances at 10% intervals, the formula would be:

--- Update: I tested the above formula and it kind of looks like the graph...

Although this question has been answered I just wanted to add something for those seeking an ideal logarithmic potentiometer law for simulation. A mapping from linear law to logarithmic law can be found in the general form: 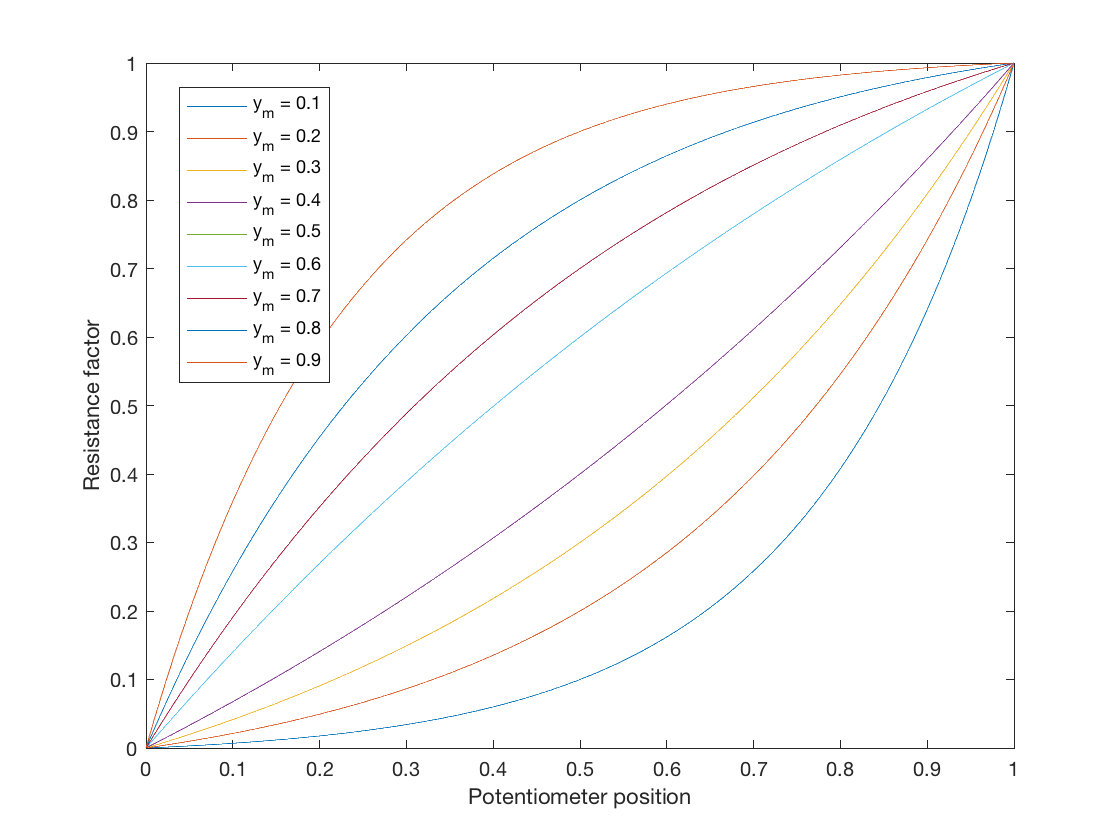 Usually audio taper pots are not logarithmic but a piecewise approximation with only 2 segments.

Each segment of the track will be coated with different resistivity material or have a different width than the other segments.

I have seen wire-wound taper pots where the former has a gradually changing width to achieve the varying slope.

A linear pot may be able to be used as a log taper by putting a resistor between the wiper and one terminal as shown in the second diagram (From Elliot Sound Products guide to Potentiometers.) 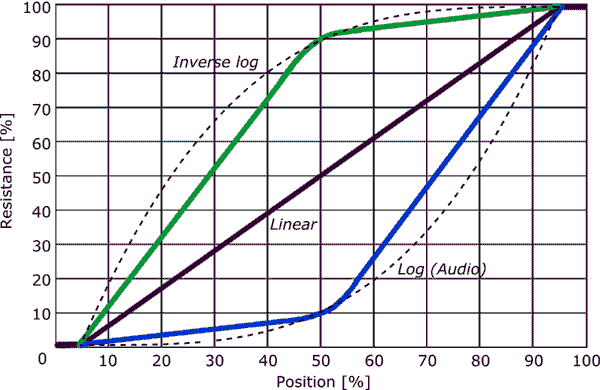 There is no formula for a log pot. The best you can expect is that the change in resistance per angle at the 'low' end is much less than that at the 'high' end. It would be nice if it were logarithmic, but it isn't.

A Kevin's answer points out, the most common approximation is for the track to have two different linear(ish) sections. This is cheaper to make than having a continuously varying taper, and cheaper than having 3 or more sections.

Unfortunately, the phrase 'log taper' has more degrees of freedom than just the total resistance, the sensitivity ratio from top to bottom is also needed. So when buying a truly log pot, I would need to specify a '2 octave' pot or a '3 octave' pot. The manufacturers and distributors would need to carry several types, selling fewer of each, so costing a lot more. For an audio application, you probably would not want true log anyway, you'd want to break away from log at some low level and go linearly down to zero.

The reason why there is no defined logarithmic taper is that no customer base cares enough about exactly what the taper is to be willing to pay enough that the manufacturers bother to standardise on something. Log pots are mainly used in audio devices, and as long as the rotation law is reasonably 'tame', no customer really cares that the pot delivers (say) 20dB per 90 degrees, they just want to set a level.

Interestingly, the BBC faced this issue back in IIRC the 50s/60s, when they wanted to design new studio equipment, and discovered that they could not obtain log pots that were the same from different sources. So they invented a neat circuit that used a linear pot to get log(ish) performance, but being a linear pot, it was always reproducible. See if you can describe simply how it works, and why it doesn't crackle. 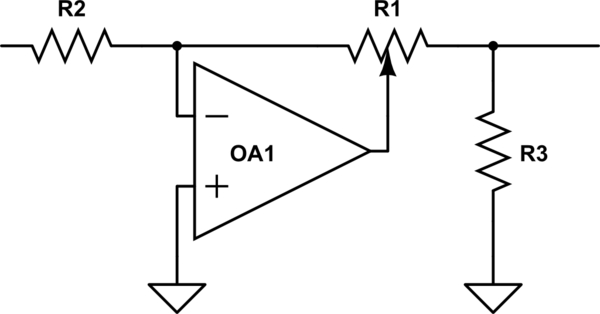 If you do set up an experiment to measure your pot's log laws, then expect the law from a different manufacturer to be different.

This schematic used by the BBC helped me very nicely in creating a log pot from a simple lin pot in my Arduino projects. I did the math. Here the results:

Let 'a' be the potmeter's setting (from 0 to 1). 'H' is the transfer function (implemented in software, of course).

I've been using a digital potentiometer to act as a crude audio volume control. Incoming signal goes to one end of the pot, outgoing signal comes from the wiper and common ground is at the other end. So if

M = Total resistance of the potentiometer

A = required attenuation in dB

Then this seems to work quite nicely:

As others have mentioned, the "zero" end of the pot travel will be -∞ dB, so at some point you have to give up on linear reduction of decibels. But above that cutoff point, you might want equivalent pot turns to correspond to equivalent decibel changes - perhaps 5 degrees CCW cuts 1 dB.

Not the answer you're looking for? Browse other questions tagged audio resistance 555 potentiometer frequency-response or ask your own question.

8
What's the difference between linear and audio tapers, and why should I care?
38
Why should I use a logarithmic pot for audio applications?
1
Audio voltage dimmer trickery! (Potentiometer not working as expected)
1
Standard for CW, CCW on pot schematic?
2
How to calculate MOSFET internal gate resistance?
0
Log-Taper Variable Resistor from Linear-Taper
0
Automated Approaches for Measuring Audio Amplifier Frequency Response
0
Identify This Alps Potentiometer