Are all electrical sockets of my house in the same phase?

Most countries use AC power that is supplied to each house. This AC power is in the form of a sine wave. Suppose I have 2 electrical power sockets in two rooms that are at the opposite ends of my house. Will both the electrical sockets provide the same sine wave that is in phase or will the voltage have a constant phase shift between the two? Which of the two graphs does it resemble?:-

power-electronics electrical
Share
Improve this question
edited May 11 '17 at 22:27

Here in North America, each house is fed from a single phase of the distribution system thru a step-down transformer. The secondary of that transformer is 240 V center tapped. All three lines go into your house.

The center tap is earth grounded near where it enters the house. Ordinary 120 V circuits are between one of the ends and the center, which is ground. High-power 240 V circuits, like for a range or dryer, are between both ends.

The two responses given have been from a North American members. I'll give a European perspective.

In parts of Europe (I know for sure about Belgium, The Netherlands, Germany, France and the UK), they use a 230 V/400 V (230 V between line and neutral, 400 V between phases) three phase system. Most houses are provided only one of the three phases, and hence the outlets will be on the same phase. Often, it is possible (although, in general, not very common) to get 3-phase in your house, in order to run larger machines (heat pumps, big ovens, ...). In this case the electrical installer will wire different sockets to different phases if it is a new installation.

In either case, even if a house is provided with multiple phases, since most rooms have all their sockets wired up to a single breaker (specific to that room or group of rooms) it is quite likely that they are still all on the same phase. 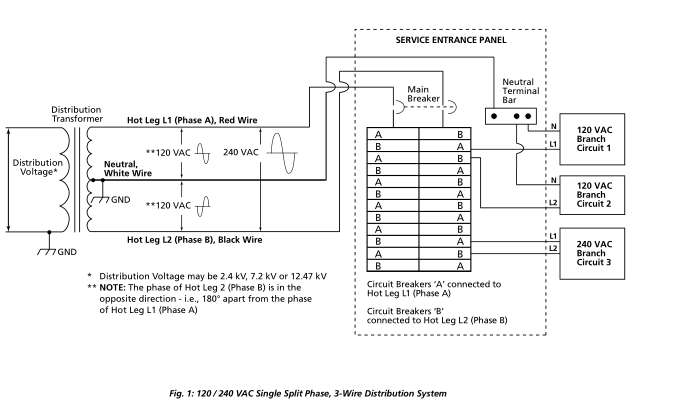 Others may be 1, 2 or 3 phases in various combinations with 120 phases.

What happens when you get a shock? like your income tax just doubled (lol) 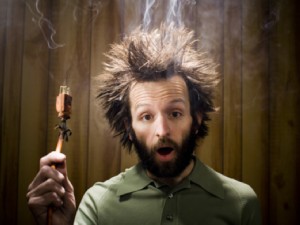 The most common residential and small commercial service in Canada and the U.S., single split-phase, 240 V, features a neutral and two hot legs, 240 V to each other, and 120 V each to the neutral.

So yes, if you are in North America, you have a two "leg" house. The different legs are normally divided to balance the load on each.

Where necessary the 240V or a two leg plug is supplied for stoves and other high wattage devices.

It depends on many factors including where you live, how big your house is, when the service was connected, how big a demand was specified when ordering the service and so-on.

There are at least four possible supply setups.

In the UK most homes are on single ended single phase. A few homes (either big ones or ones where somone wanted three phase for a workshop) and most commercial properties are on three phase wye. Split phase is rare but not unheard of. I've never heard of a wild-leg supply over here.

AIUI most homes in north America use split single phase but three-phase wye is not unheard of. Commercial properties are more likely to have three phase (either wye or wild-leg). Some very old/low power supplies may be single ended single phase.

AIUI in mainland Europe both single ended single phase and three phase wye are quite common but I don't know further details.

I don't know what the rest of the world does.

As mentioned in other answers, it can be implemented both ways, and your location (and age of electrical installation) would influence if you have one or more phases (/legs) in your house or not. But even if there is much greater chance they are implemented one way, does not mean that in your specific case it will not be wired differently!

So only way to be sure is to measure it.

If phase-to-phase voltage is 0V, both outlets use the same phase. If it is not, they are on different phases.

Depends on what you mean by Phase

In North America and similar territories (Colombia, Guam, parts of Japan and Philippines), houses are supplied single-phase 240V, but with a center tap, and the center is neutral. This provides 120V power for most outlets in two poles (not phases since they are the same phase). It is accurate to say these are 180 degrees out of phase with each other, but that's not normally thought of as a phase. A phase is something else.

Elsewhere has real phases, but usually just one

In Europe and the rest of the world, 230V three-phase power (120 degrees apart) is supplied right down to the city block. This is in "wye" configuration with the neutral at the center and 230V on each leg obviously. Most houses are provided a single phase and neutral, but it is not uncommon for a house with higher demand to be provided two phases. These phases are ~400 volts apart hot-to-hot, and are 120 degrees out of phase with each other.

In rare cases a house might get all three phases - this is as easy as justifying it to the power company. (heh). In this case the house is getting 400V 3-phase, which is nearly the 480V 3-phase America serves to industry and large retail.

There is one other configuration that is gaining popularity in the United States, particularly in newer offices and apartment buildings. It is 115/208 three phase.

Unlike European three phase systems, all three phases may be available to outlets. This is popular where greater efficiency in three phase motors used in air conditioning is significant, but not great enough to justify a 480/277 volt service and most loads are 115 volt compatible.

There is a slight loss of performance on large single phase loads due to the lower phase to phase voltage (208 vs. 220) and some incompatibility (some 220 V equipment is not 208 volt tolerant), but other than pure resistive loads (ranges and ovens) three phase equipment will have better performance.

'Phase' is a technical term that has a specific meaning when referring to domestic wiring and most of the answers have interpreted it as single phase as opposed to three phased wiring (i.e. domestic vs commercial).

However, I don't think that is what the OP was asking. Two sockets a reasonable distance apart but on the same circuit will experience a small but measurable phase shift due to the extra travel time to the further socket. This is more noticeable on a spur such as a long extension cable then on a more traditional looped circuit. Normally this would be practically undetectable but there are situations where this might become significant though they are rare. For example, the use of two photographic lights where one is on a very much longer spur than the other may begin to show syncing issues at higher shutter speeds.

The answer to the OP's question is; Yes, there will be a small but detectable phase shift on the voltage of different sockets in your house, as per your phase shift diagram, but without knowing why you are asking the question, it is not possible to say if it is significant, and without knowing how far apart the sockets are, it is not possible to say how big the shift is (but it will be tiny!).

I'm surprised no-one has said this but if you are in any doubt looking at the wiring between the incoming supply, your meter, and the distribution panel should confirm this.

If it is not marked with the phases (I would think it should be) you can count the wires.

This assumes the meter and distribution board are connected with individual wires rather than multicore cable (which they should be, given the high amperage.) If multicore is used, you can still look at the terminal blocks.

In my old apartment, I had a single phase supply (typical of the UK) but the cable to the meter cabinets was sufficiently exposed that I could see my neighbour was on a different phase to me.

Not the answer you're looking for? Browse other questions tagged power-electronics electrical or ask your own question.

0
Induction generator
0
How can a constant secondary side current cause a primary current to flow in a transformer?
0
How to supply electrical current to a motor-powered rotating shaft?
2
Energy loss by Hysteresis
3
Fourier Series Expansion of the phase current of a three phase full wave bridge rectifier
1
Active (P), Reactive (Q, D) and Apparent (S) Power from Instantaneous Power (p)
0
Using active BPF to convert a square wave into a sine
1
Two-phase system for a smart house?