Where does the idea of two port network equations come from?

When introducing the two-port network models for linear circuits, the texts start with an argument similar to this:

"To characterize a two-port network requires that we relate the terminal quantities V1, V2, I1, and I2, out of which two are independent."

It seems like someone in history had the idea of relating input voltage to input current and output voltage ect. and made a circuit model for his equations.

And these mathematical equations are modelled as the following circuits: 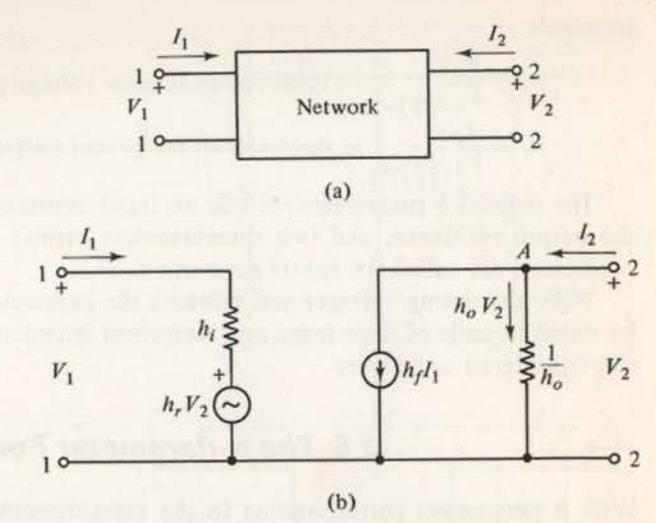 My question is about the motivation of the idea of writing those two equations at the beginning.

But when I think of some one writing the following:

my mind gets locked.

Why two independent relations are added to equate V1?

So in a linear system, where does the idea of adding two relations come from? Is there a way to demonstrate it in an easy way?

Here is the superposition principle:

But this principle is turning off "voltage sources". But in the equation:

The key is this:

To characterize a two-port network requires that we relate the terminal quantities V1, V2, I1, and I2, out of which two are independent.

Depending which you pick, there's a different name for the matrix that relates them.

If you pick one current and one voltage as independent then that's considered a "hybrid" representation and the matrix is named "\$\bf H\$".

You can even pick linear combinations of the I and V variables as the independent and dependent variables and get things like the S-matrix ("scattering matrix") and S-parameters used in RF work.

Usually we pick a representation that makes our circuit easy to understand. Or we might initially analyzer a problem using a representation that makes it easy to understand the function of some subnetwork, and then use well-known transformations between the different matrices to get a form that's easier to solve, or easier to evaluate how it will combine with other subnetworks in the full network.

For example, we often represent a common-emitter BJT circuit using the H matrix because we know the collector current is very nearly proportional to the base current, but that it varies slightly due to the collector voltage (this is exactly the circuit given in your example, and why the BJT current gain \$\beta\$ is sometimes called \$h_{fe}\$).

I guess you are trying to focus on this part of your question?

But when I think of some one writing the following:

my mind gets locked.

You found this definition of the superposition principle:

This is simply wrong, or at least it's a very incomplete version of the superposition principle.

First, not all resistors are linear, and a circuit containing a nonlinear resistor can't be solved by superposition.

Second, other elements than those specified can be included in a linear circuit, such as current sources, linear capacitors and inductors, and linear controlled sources (VCVS, VCCS, CCVS, or CCCS).

Probably this definition was put in a book at a point where voltage sources and linear resistors were the only components that had been introduced. Later, the author should have given a more complete version to allow for other component types.

What does the input-forward-reverse-output matrix tell us, about this circuit. Since the OpAmp has 100 Ohms Rout, and only 30dB openloop gain, the OpAmp only poorly controls Vout. We have all sorts of interactions between input Rsource and output Rload. The matrices capture the entire group of interactions. Thus we can write the (4) equations, or use the matrix.

Not the answer you're looking for? Browse other questions tagged linear network or ask your own question.