I bought a musical birthday card with a small circuit in it hooked up to a piezo speaker. I took the circuit out and realize that it was ridiculously simple (from what I can see). So I was thinking if there is anything I can do to change the song it came in with ? (I was thinking checking each contact point with an oscilloscope when it runs but I don't have an oscilloscope)

I do suspect that the song is recorded in the white blob in the middle of the circuit, so any tips on breaking it open?

EDIT: This whole post and idea will be abandoned as there should be no possible way for me to hack a musical birthday card. Thanks to everyone who answered. 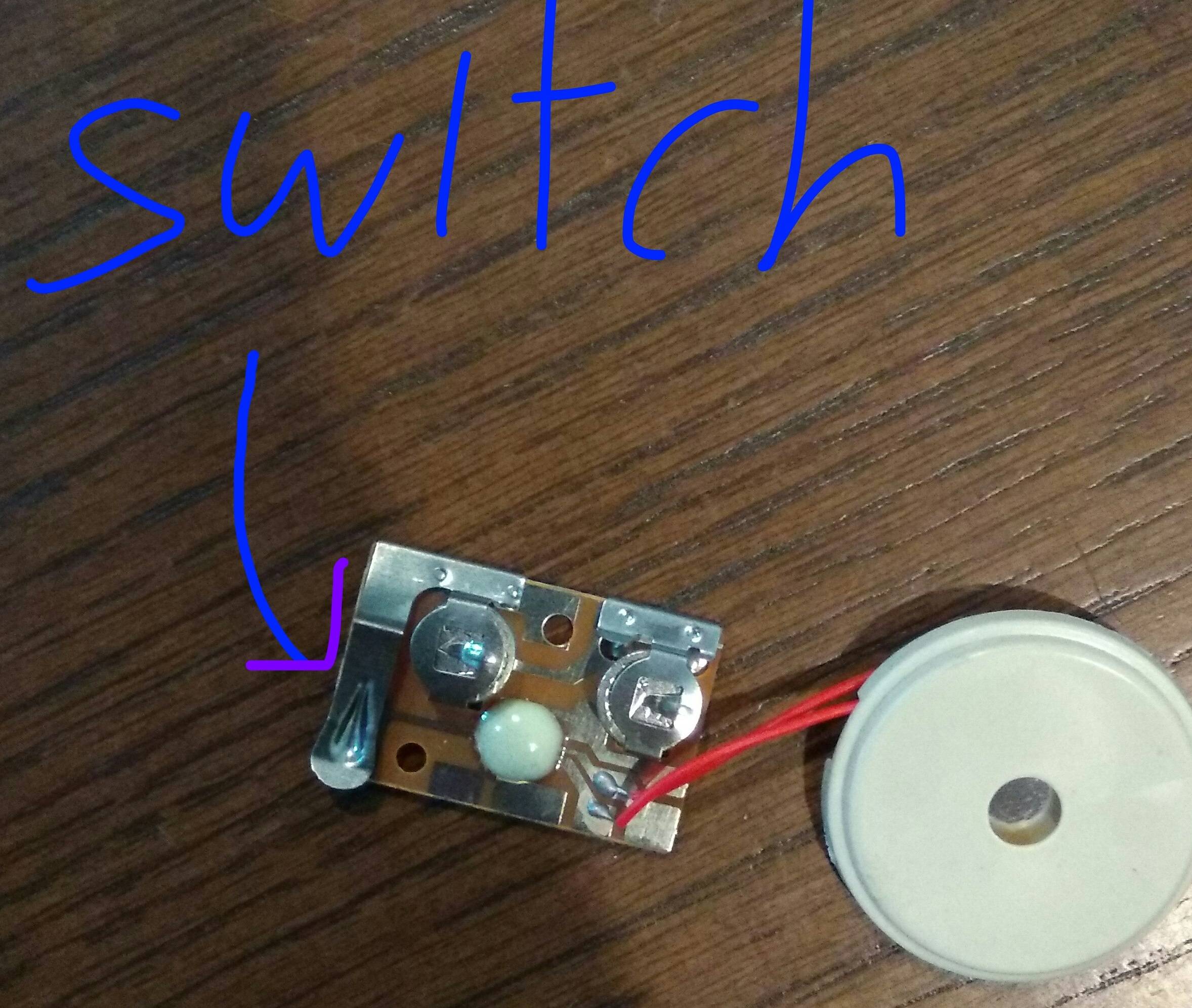 The other people have addressed why it is unfeasible (or ridiculously anti-economic) to hack that chip. I'll address another approach.

Since in a comment you say you own an Arduino, but you deem it is too big for your intended application, I suggest getting one of these Arduino clones.

They are dirty cheap and quite small. They miss the USB interface, so they must be programmed via an USB-to-UART module like this.

You may adapt this code to make your tiny Arduino board to play the melody you want.

It is unfeasible to change the song. It is stored in the bare chip that was epoxied to the board in manufacturing. It is not a rewritable memory of any type.

Probably song is stored in ROM and you can't do anything except replacing the chip. Good news is you don't need the exact same chip, any microcontroller would work. Bad news is that power available from the card is probably least suitable, so you would need power conversion and in any case you will drain the batteries much faster. And the appearance... You will have a full featured pcb instead this white blob. Arr you sure you want it?

It sounds as though all you want to do is to change the song. But they aren't designed for this and it would be either (1) impossible; or, (2) requires expensive tools and skills.

That exhausts the possibilities. And.. well, you can't do it. It's either impossible or it requires tools and skills you can't afford and don't have. (You couldn't have asked the question, if you had them.) Bottom line: NO.

That said, you still can do it on your own. You don't have to buy an Arduino to do it. You can get a microcontroller IC for about a dollar that probably has enough memory available to record a small snip of a song equivalent to what you heard in the card. You'd need some programming tools (not expensive) and you'd need to find and/or develop code of your own (skills, time.)

But as always, with enough time, money, and skills, nearly anything can be done.

You may be able to find a product on the market that makes this easier. If so, just google for it. (I'm not going to do that.) It's possible that someone is making a toolset to put this kind of ability into the hands of artists. So search around for it. Or perhaps someone has a nice DIY page on the idea?

Aside from that, you can always just buy one of those dirt cheap MP3 players. They come very, very cheaply these days and can be about the size of a postage stamp. You download all the songs you want, too. Audacity+Lame is free software that can help you make your own, too, if you have a microphone.

If you were serious about making it exactly the same size as the blob on that card, and assuming you can't reach the FAB brokering price point where you design your own IC and buy a wafer as part of a brokered FAB process somewhere, you will need to contact the microcontroller vendors and ask for a waffle pack of dice. Some will sell them to you (they sold them to me and I'm just a dumb hobbyist.) You might need to convince them you won't static-zap them on accident and then blame them for shipping you "bad parts." And you most certainly will need access to a wire bonder and the skills to use one. (Or else those wafer test probes and associated equipment for them.) But you could get there in small qtys (I was making 100's at a time borrowing a wire bonder from a local company with someone to help train me, too.)

But seriously. Give up on the idea of re-programming a song into that card or of making something just as small. Unless you have the desire, the money, and time to learn lots of new skills.

Not the answer you're looking for? Browse other questions tagged piezo-buzzer card or ask your own question.

12
How are electronic musical greeting cards made?

12
How are electronic musical greeting cards made?
0
SIM Cards are using a Microprocessor or Microcontroller?