Optimizing a circuit for noise immunity

Followup to this question. I have a circuit with three instances of this pulse detector: 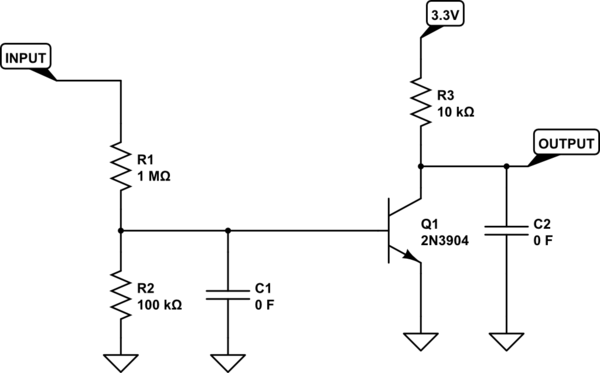 C1/C2 not present yet - therefore the 0F value. R2 varies from one circuit to another (20K-120K), to get a different triggering voltage.

Let's assume for now that inputs are square wave, low level at 0V and high level varies between 12V and 50V, depending on the circuit. Outputs are connected to GPIO pins of a SAMD21.

Circuit is much more unstable than I expected. Simply touching Q1's base - either with a finger or an insulated, unconnected wire - is enough to cause a pulse detection in the microcontroller. Pulses can also cause detection in adjacent circuits: 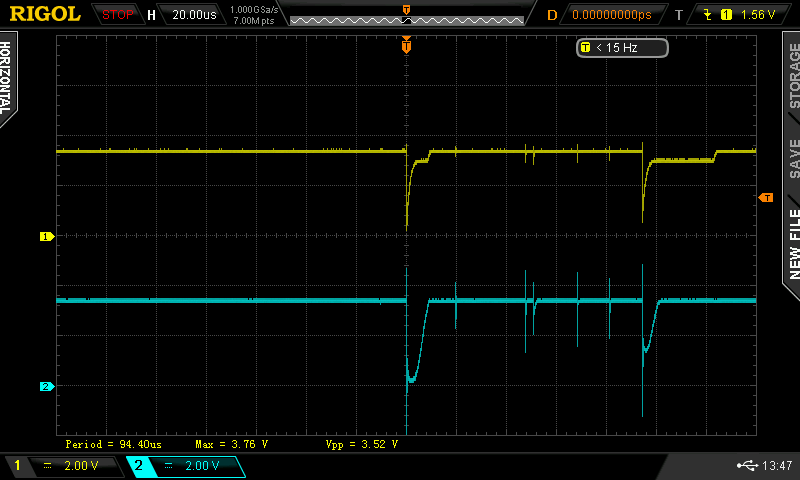 What are the options here?

So... Answers so far tell me that my original question was twofold:

This is what we're talking about: 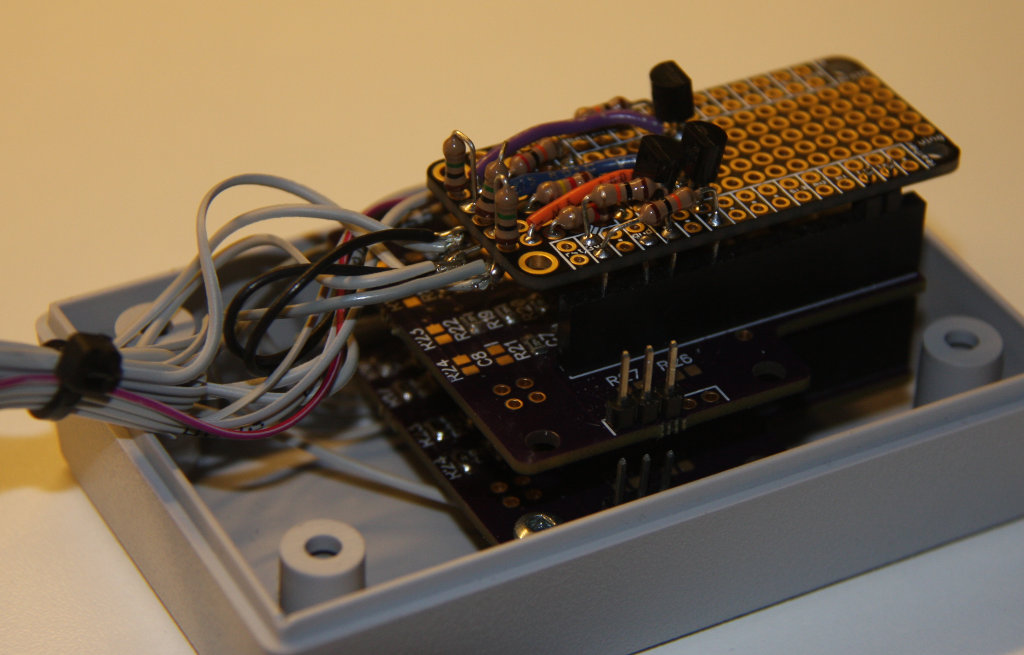 The stack is normally composed of 4 boards. From top to bottom:

The circuit being discussed previously was actually incomplete. The major difference is that the circuits being monitored for pulses is also monitored for average voltage. Here's the complete version: 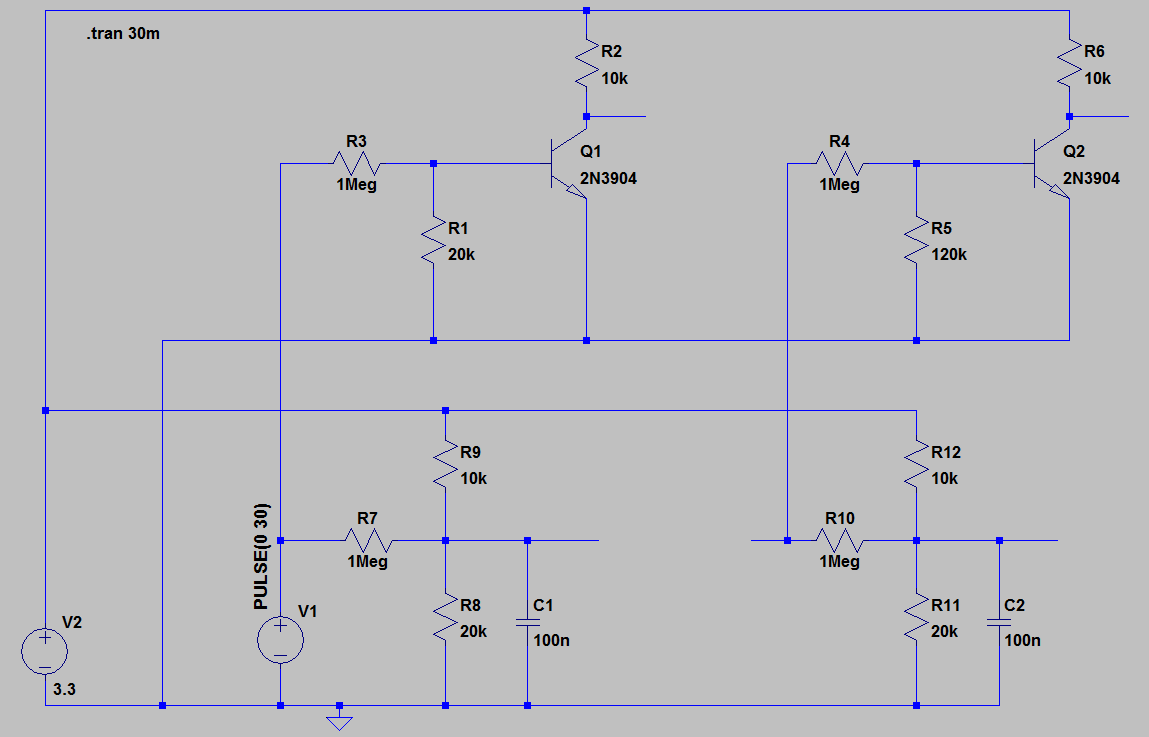 The overall module power consumption is ~200uA in steady-state. With the 30V signal appied, that barely change - I just discovered that Q1 isn't yet in full conduction. With 40V input, Q1 is in full conduction, and the whole module consumption is ~400uA. Meter accuracy is probably not that great. All caps charge/discharge is limited by resistors 10k or larger. I can't rule out a daisy-chain ground issue, but I somewhat doubt that's it.

About the probes: they're 10x probes, indeed in the 10Mohm, 10-20pF range. With the probe in place and the circuit in steady-state, no input applied, the meter measured a marginally negative supply. Another proof that the probes have a significant impact on the circuit. But the problem was originally detected because the microcontroller reported pulses on pins that weren't receiving a signal - so the probes may make it worse, but it's present nonetheless.

I agree that with a better construction, the issue may disappear by itself. However, I'd like to find a fix for this crosstalk issue in the current setup, and use the gain brought by a better construction (PCB, merge all boards) and hysteresis as extra margin. Any idea how to fix it?

Time to describe a bit more the crosstalk victim - the 1Meg/120K circuit in the top right corner of the previous schematic. That circuit's normal input is a 0-14V square wave. Desired behavior is to detect when its level change.

The sine wave input is only to illustrate the 6V inflection point I was describing in comments, when saying that I believe I'd need at least 6V of noise to see a pulse on the output of this circuit.

Based on sstobbe's idea that the noise could come from capacitive coupling in the ribbon cable, I added C3 to my last schematic to model it: 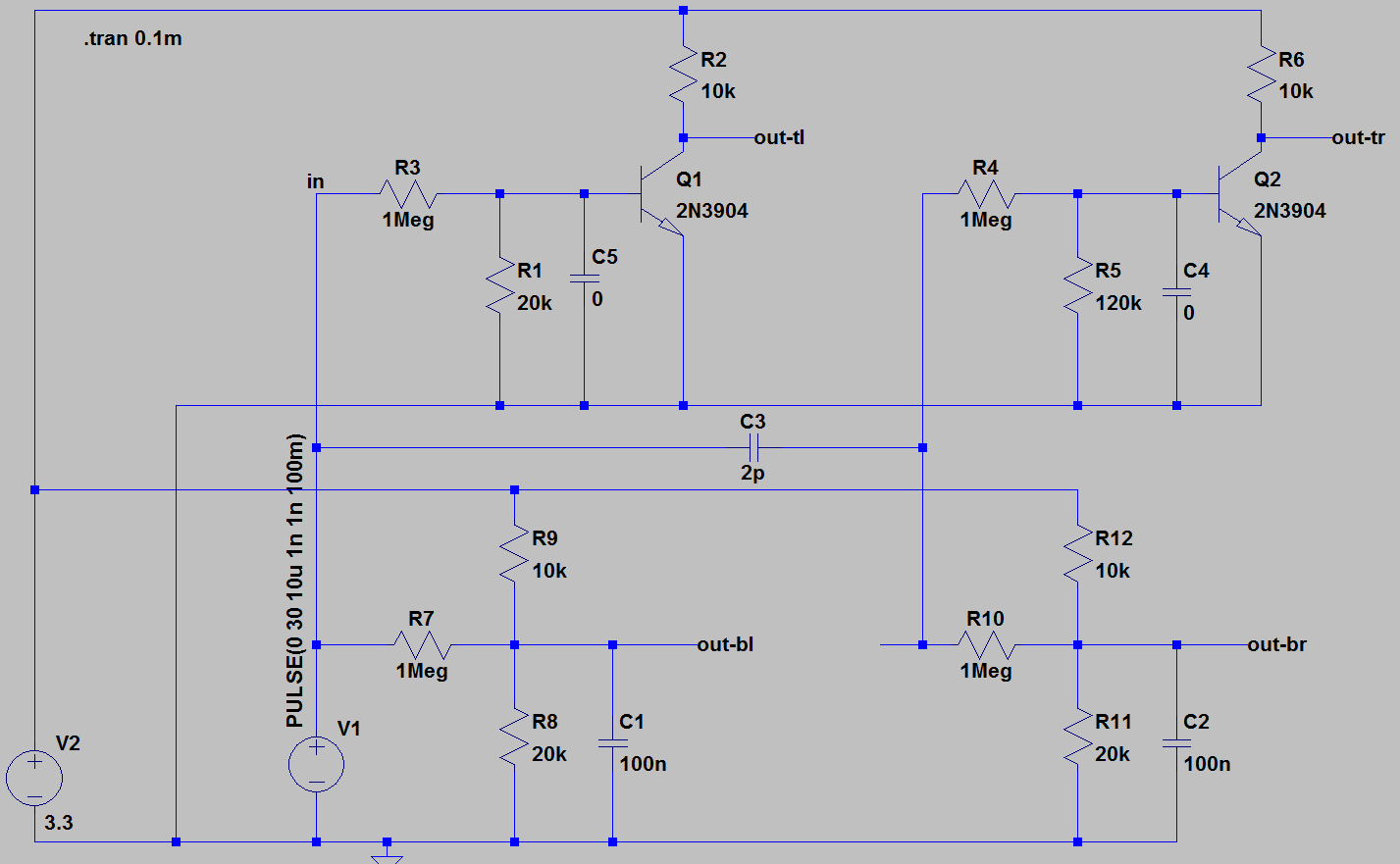 That's correct. A 2pF parasitic capacitance from line to line is enough to cause spurious level change on the other channel. I've simulated with the source rise time from 1ns to 1us with similar results.

It's tempting to compare these with the scope screenshots, both in waveform and timings, but we've already established that the scope was influencing the circuit. The 2pF value above compared with the 10-20pF probe capacitance is one more proof.

Now for the fix, I've tried adding capacitors on each transistor's B-E junction. With C4=C5=1nF, the bug disappears. Trying to figure out how much margin I have, I started increasing C3. Here's the output with C3=40pF:

That might be enough to be worth trying in hardware, but it's still a really thin margin. I'll probably try simulating the hysteresis circuits first.

But it may also be well past the time to ditch the transistors and move to an op-amp. I just need to figure out how to design it - most 3.3V op-amp aren't officially approved to receive spikes of 30+ volts.

D'oh... Sometimes, the truth is hidden in plain sight.

There's one massive omission in my last schematic - the signal source for the right-hand half part. Because in real life, well, there'll be one, even if there was none in my bench test case. That source's low output impedance is the best noise filter I can dream of.

So I just tested it in the vehicle, and although there is some noise/crosstalk causing false detection, it is much less severe than what simulations or bench tests suggested. I'm quite confident that filtering with small caps on B-E of each transistor and tuning the conduction points (and adding hysteresis at the same time) will fully take care of it.

Time to close this one, it has run its full course. I really have trouble picking up a "best" answer, all three of you have been tremendously helpful.

Looking at your scope display, I think adding hysteresis is a very good idea. It should help, as analogsystemsrf suggested. He also suggested a decoupling capacitor for the \$3.3\:\textrm{V}\$ rail. I think that makes sense, too. Worth doing. That said, I do have a minor problem with precisely how he set things up.

The injector is basically (as I understand it) a coil (with a little inherent resistance to it) that is switched by a Darlington, whose emitter goes through a small current-detection resistor to ground. I gather it isn't uncommon to also have a zener across the collector to ground, with a value somewhere around 36-39 V (or more.) (This doesn't mean you can't see very high spikes, though.) 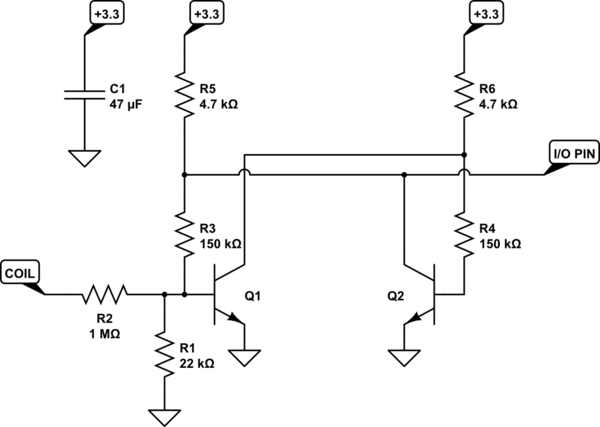 I recommend you try out analogsystemsrf design, first. If that works for you, use it and save yourself a resistor. Either way, don't forget to apply the bypass cap.

The basic idea in the above circuit is pretty easy. Both BJT circuits are "balanced" (same resistance pulling their bases upward, balanced to the degree that the resistor values and BJTs are the same.) Either one of them might power up as controlling the other (a BJT collector is able to turn off the opposing BJT -- but only if the opposing BJT isn't turning it off in return.) Which one it is isn't predictable, without the addition of \$R_1\$ to the circuit. \$R_1\$ imbalances this circuit and ensures that \$Q_1\$ powers up as off, which allows \$Q_2\$ to power up as on.

So that's a very simple approach to this. It does not tell you how to come up with the values for \$R_3\$ and \$R_5\$ in the first place. But trial and error would move you rapidly towards the right values, anyway. I use a closed equation for doing this, fed by a variety of BJT parameter statistics. But that's just for robustness. For a simple design, the above details provide enough for considering one's own design.

\$R_5\$ and \$R_6\$ do affect the calculations, of course. But mostly they are just "pull-ups" for your needs. I usually just specify them to the algorithm.

Add 100uF on your 3.3V rail. Those circuits should not be interacting, unless their ground is daisy-chained. 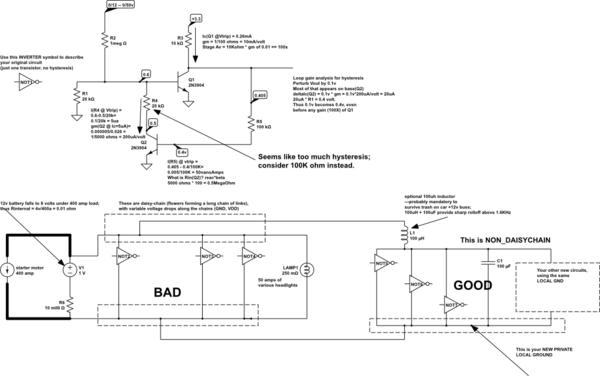 Please note, after some mental modeling of trip points in the hysteresis, I've increased the R4 from 20k to 100k as a suggestion. No sims were run.

This response is in respect to cross-talk.

So in total during conduction \$ C_{be}\$ is 15 pF. To charge a 15 pF cap to 0.7 volts in an environment with 50 volts swings doesn't take much stray capacitance. 200 fF of stray capacitance from a 50 V swing injected into Q1 would be enough to cause it to fully conduct.

Your ribbon cable, I'm going to guess has 10 pF of stray capacitance between conductors, plenty to trigger an adjacent channel.

It is also worth noting that a 10 pF cap has an impedance of 1 MegOhm at 16 kHz.

Not the answer you're looking for? Browse other questions tagged noise or ask your own question.

2
digital input levels based on another circuit (using a transistor switch?)
1
Scaling a car's injector pulses to count and time them?

9
Power Supply Noise
3
Micro controller reset due to noise, PCB design for noise immunity
2
Ground Plane Noise?
0
What could be the reason for 50Hz noise with isolated input signals?
1
Optimizing regulator power circuit for low noise?
1
How can I extract the rms noise from the measurement's over all noise?
0
Noise figure to voltage noise spectral density hand calculation