How would a ring oscillator with even number of inverters behave?

Intuitively, I understand that with an even number of stages, the output of the last would be the same logic level as the input of the first, so that the output eventually latches to a certain logic level. Whereas, with odd number of inverters, the outputs switch and the resulting frequency is determined by the gate delay.

However I also read that Barkhaussen's criterion does not apply to non-linear circuits, and cannot be used to evaluate the behaviour of a ring oscillator. If that is the case, how do you explain the sustenance of oscillations in the oscillator? More precisely, what would the transient behaviour be like, that leads to oscillations?

oscillator oscillation metastability
share | improve this question | |
asked May 13 '17 at 20:11

It likely wouldn't do anything interesting.

With an even number of inverters, there should be phase shift through the ring of 0 degrees, but there is no DC inversion at the end of the chain, meaning the circuit should be inherently stable.

Initially you may find that they start up in an unstable state but at some point it will settle down because there will always be one inverter that is slightly stronger than the rest - usually the output node as it would normally be loaded.

If you can guarantee that the output of one of the NOT-Gates is in a defined state ("high" or "low") for some time the circuit will latch a state independent of the types of gates used.

However what if the initial output voltages of all gates is the same level?

This surely depends on the exact types of gates used:

However as soon as the input voltage of one CMOS gate rises (or falls) a little bit the output voltage is falling (or rising) rapidly. 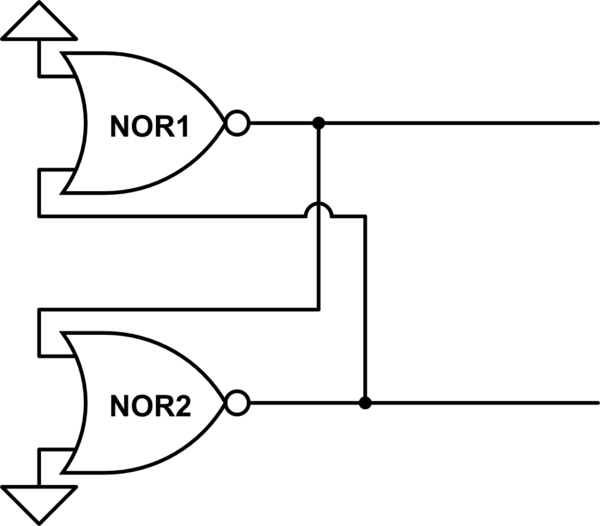 Not the answer you're looking for? Browse other questions tagged oscillator oscillation metastability or ask your own question.