How is fully charging a Li-Ion battery in 35 minutes possible?

I happen to own a power drill/driver that runs on a Li-Ion battery and ships with a charger that charges it fully in 35 minutes and claims to charge it to 70% in 15 minutes.

According to answers to this question the highest charging current for Li-Ion batteries is about 1C which with losses taken into account means that charging time should be at least more that one hour. This is consistent with my experience of using other devices like cell phones - they take about 1.5 hour to fully charge.

How is charging a Li-Ion battery in about 35 minutes possible then?

How is it possible? Every Li battery manufacturer under the sun wants to create fast-chargeable batteries, so it's a hot research topic.

This article from 2007 sheds some light on the subject of the internals of fast-charge LiIon cells:

There is no standard definition for high-drain-rate cells, but basic design guidelines dictate that standard cobalt-oxide-based cells can support a 2-C or maybe a 3-C rate, continuous current. High-drain cells based on cobalt-oxide support roughly double those currents, but only for seconds. The new high-drain cells support 20 C continuous.

Given that a high-discharge-rate cell can support high-current discharges over a very short period, in theory, a battery charger could fully charge that cell in an equally short amount of time. But to take advantage of this possibility, the conventional battery-charger design must be modified. For the sake of simplicity, these changes can be illustrated with the example of a single-bay charger supporting a single-cell battery pack.

On the surface, fast-charging Li-ion cells seem straightforward. It seems that one could simply increase the current delivered during the constant-current phase of the charge cycle. However, as shown in the table, the overall charge time is not significantly decreased when the current is increased from 1 C to higher rates.

The difference in charge time with a 2-C rate versus a 3-C rate is only about one minute, regardless of the cell vendor. Essentially, the cells will just reach the upper-voltage cutoff faster, but the time in the constant-voltage charge mode will be much longer. Obviously, this increases the potential for damage to the battery due to overvoltage. The resistance of traditional Li-ion cells will cause them to heat up more during faster charges, so the cells will begin to break down. Fast charging significantly reduces the battery life cycle.

Designing a cell that can accommodate high-discharge and high-charge rates is an effort to reduce the path length and resistance for the transport of ions and electrons. Fig. 1 shows a cross section of a typical Li-ion cylindrical cell. Changes start with the battery's active materials. Traditional Li-ion cells are based on a lithium-cobalt-oxide (LiCoO2) cathode compound. In this material, Li-ions, which diffuse in and out of the cathode, can only be inserted through 2-D paths in the crystal structure.

The path length can be shortened by changing the physical morphology of the battery's active material or changing the material's chemical structure, or by doing both. One approach to addressing the problem physically is to decrease the particle size of the materials to as small as nano-scale. New chemistries such as manganese spinel (LiMn2O4) offer 3-D pathways for ion insertion.

In addition to these changes, the resistance of the cells must be lowered by using thin materials, increasing the amount of current collectors, and increasing the electrolyte concentration and reducing its viscosity with solvents. Many of these changes suggest that Li-polymer cells, which can be very thin, lend themselves for use in designing for high rates.

Li-ion cell manufacturers have been experimenting with their formulations in order to implement designs specific to high-rate applications. A few manufacturers have come up with solutions. E-One Moli Energy introduced a high-discharge-rate cell based on a manganese-spinel cathode material for cordless power tools.

It is easy to make a Li-Ion battery appear to be charged in under one hour despite it's actually not. After reaching the desired charge voltage (first dashed vertical line) the cell will still accept current and can be charged further. If this step is left out the cell will appear fully charged if measured directly after charging, but voltage will significantly drop later. 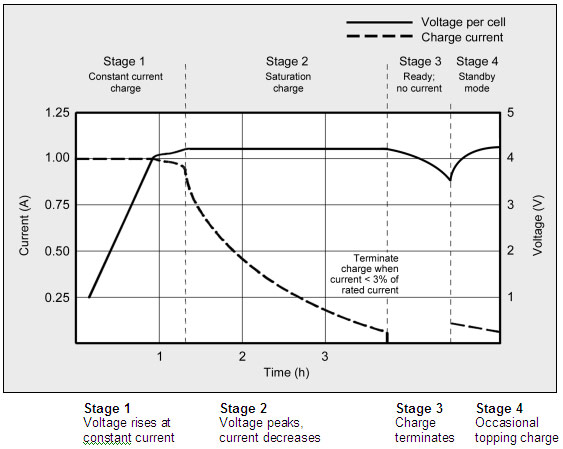 Some lower-cost consumer chargers may use the simplified “charge-and-run” method that charges a lithium-ion battery in one hour or less without going to the Stage 2 saturation charge. “Ready” appears when the battery reaches the voltage threshold at Stage 1. Since the state-of-charge (SoC) at this point is only about 85 percent, the user may complain of short runtime, not knowing that the charger is to blame. Many warranty batteries are being replaced for this reason, and this phenomenon is especially common in the cellular industry.

To find out if this is the case with your charger, measure the voltage and current over time while charging and compare your measurements to the diagram above. If you provide that data, it should be clear what's exactly going on. Currently we have no data except the claims of the charger, so every answer will be speculative.

I happen to own a power drill/driver that runs on a Li-Ion battery and ships with a charger that charges it fully in 35 minutes and claims to charge it to 70% in 15 minutes.

According to answers to this question the highest charging current for Li-Ion batteries is about 1C which with losses taken into account means that charging time should be at least more that one hour. This is consistent with my experience of using other devices like cell phones - they take about 1.5 hour to fully charge.

How is charging a Li-Ion battery in about 35 minutes possible then?

I wrote the long answer to the prior question.
Your drill battery and charger quite possibly combine several of the aspects that I described there that could enable fast or apparently fast charge.

That is, the industry practice is to charge at 1C max BUT individual manufacturers are free to push the limits. Issues are thermal, mechanical and chemical (at least). As I said - lower battery life may result.

Which is just what you are reporting - its entirely consistent with the prior answer - just not industry standard and it suggests that you may get short cycle life or lower than expected capacity.

A major reason may be that the manufacturer is in fact extending cell life by rating the cell at a lower capacity than standard and not charging it fully. If they rate it at about 60% of actual then:

In practice some mix of the above is probably used.Say

Or they may do something quite different :-).

One way to reduce Charge Time is to improve cell chemistry to reduce ESR, but of course cell matching becomes critical with shunt currents to normalize power transfer per cell. Temperature rise is a highly accelerated aging factor. I figured out my Mac AIR has only a 1000hr useful battery life, so I use the charger as much as possible and try to avoid excess temp rise.

8
How can a smartphone's extended battery be same size as the original battery?
19
How fast can a Li-Ion battery be charged?
10
Is there any sense in this technique for charging Li-Ion batteries?