Is there such as thing as an ideal Zener diode?

I was trying to clamp voltage down across a 2.7 V supercapacitor and by measuring what is going on was reminded that Zener diodes have both a very soft "knee" region and a leakage current I can't ignore (several mA for the ones I've used). Is there a type of Zener diode which would have a sharper knee and next-to-no leakage current?

Alternatively, what else could be used instead of a Zener diode? What leakage could be expected from an LDO regulator?

Well... garbage in, garbage out :) I was using the name "ideal diode" in the sense of such circuits (made from FETs) I've seen described, but after reading more about them, they are probably not what I can use here.

I'd value more something which would have next to no leakage current (single-digit µA range) than a sharp knee (where I basically need to clamp a power source which could in theory spike up to 5 V down to the 2.7 V the supercapacitors can handle).

What you'd probably want is a "crowbar circuit", ie. a circuit that uses e.g. a MOSFET to short the supercap if voltage crosses a certain threshold. 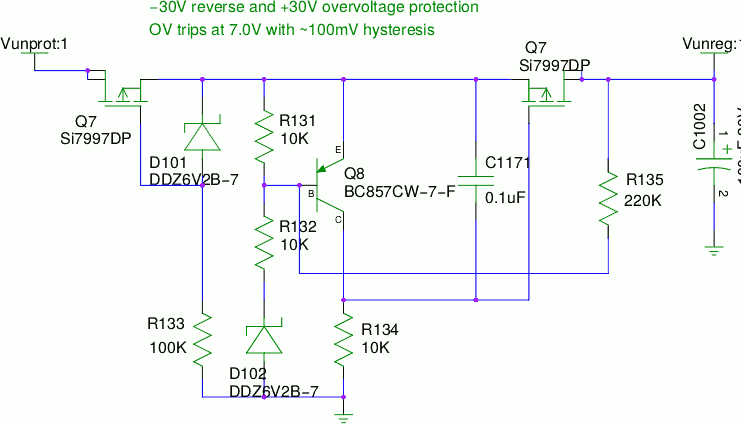 You could implement that thresholding using a Zener diode with a significant series resistor.

Another example of a crowbar overvoltage protection approach can be found on wikibooks.

With the exception of "cryonic" superconductors, no electronic component has near zero series resistance.

However with comparators having gains of 106 or more, you can reduce the impedance by negative feedback gain, but still current limited by the series switch RdsOn.

All low voltage zener and LED diodes have similar Rs or ESR "bulk series resistance" that affects the knee, but remember this: The higher the current rating of the diode, the lower its ESR when saturated, or Rs or Rz or Zt as they call it for Zener diodes.

So in conclusion, the regulation of the voltage is due to the loop gain and fixed voltage reference (LDO or band gap or LED) and controlled series R or PWM regulated Buck current charger with a voltage limit.

An OVP crowbar must have a series fuse or polyfuse in case of series regulator failure!!

You would expect a TVS diode to have an extremely sharp knee (read low ESR). This one is rated at 0.07 ohm for ESR (see Rdyn). According to my formula the package maximum rating with a heat sink should be 14 watts at 85 °C (read ESR =1/Pd max rated continuous at 85 °C with a heat sink.

But then a TVS diode is not intended to use as a zener but in pulse mode , you could. They do not give a Pd rating, but if you see the size, you will see it is close with a large metal plane. Ppk = 800 W

Not the answer you're looking for? Browse other questions tagged voltage-regulator diodes zener or ask your own question.