In my current (Arduino) project I have (currently) 3 MIDI INs and 2 MIDI OUTs. However, it would be nice, if I can configure each of the MIDI connectors as IN or OUT by software (Arduino).

The circuits I am using are: 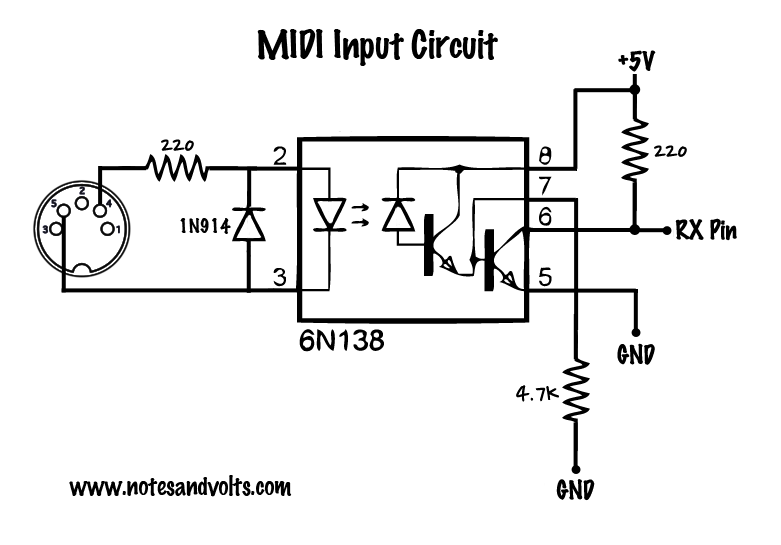 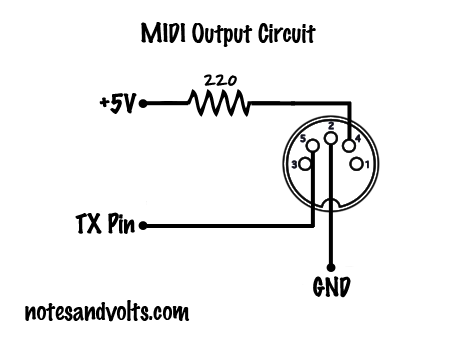 (Update: My MIDI Output circuit has a 10 Kohm resistor instead of a 220 ohm resistor)

What I would like is to use the connector show in the above picture as MIDI In OR MIDI out. I have not tried it yet, since I have too many doubts and I do not want to break a component. However, I thought about it (with my limited electronic knowledge), and I think:

Based on the answer of CL:

According to your items:

There are some errors and suboptimal choices that are common in the circuits that are blindly copied & pasted around in the Arduino community:

It would be a good idea to read the MIDI specification.

To summarize: the only practical way of sharing a MIDI connector for input and output is to build both circuits, and use switches (e.g. CD4053, 74LV4053, or any other SPDT analog switches, but consider the switches' resistance) to activate only one of them.

Not the answer you're looking for? Browse other questions tagged arduino midi or ask your own question.

5
MIDI to Arduino with a 4N38 Optocoupler
3
MIDI out waveforms very different between two devices
1
Multi channel optocoupler
1
MIDI out / thru circuit questions
0
I cannot get opto-coupler H11L1 to work as MIDI Input
6
4N35 opto-isolator for MIDI input does not work?
3
Building a midi project with Arduino + scrap components (optocoupler and diode)
3
Do I really need diodes to receive MIDI?