Duracell PowerCheck - How Does It Work?

I've been using these batteries for a long time and I've never seen such a feature.

There's a band on its outer wrapping having two ends: The white circle on the left side and the another one on the right side (not visible because it's under my thumb): 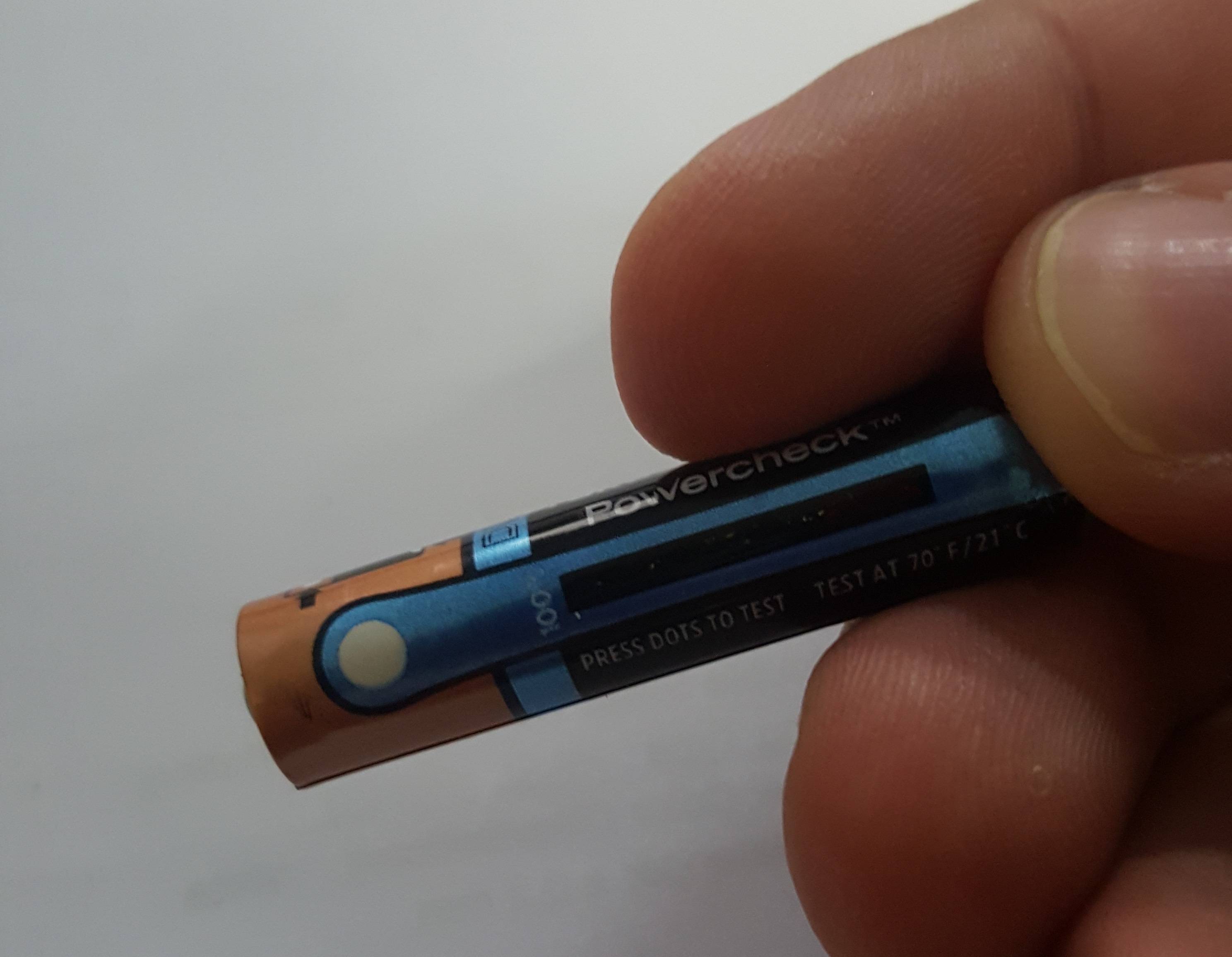 If you press hard on those ends, a bar slowly fills up and shows the current capacity of the battery: 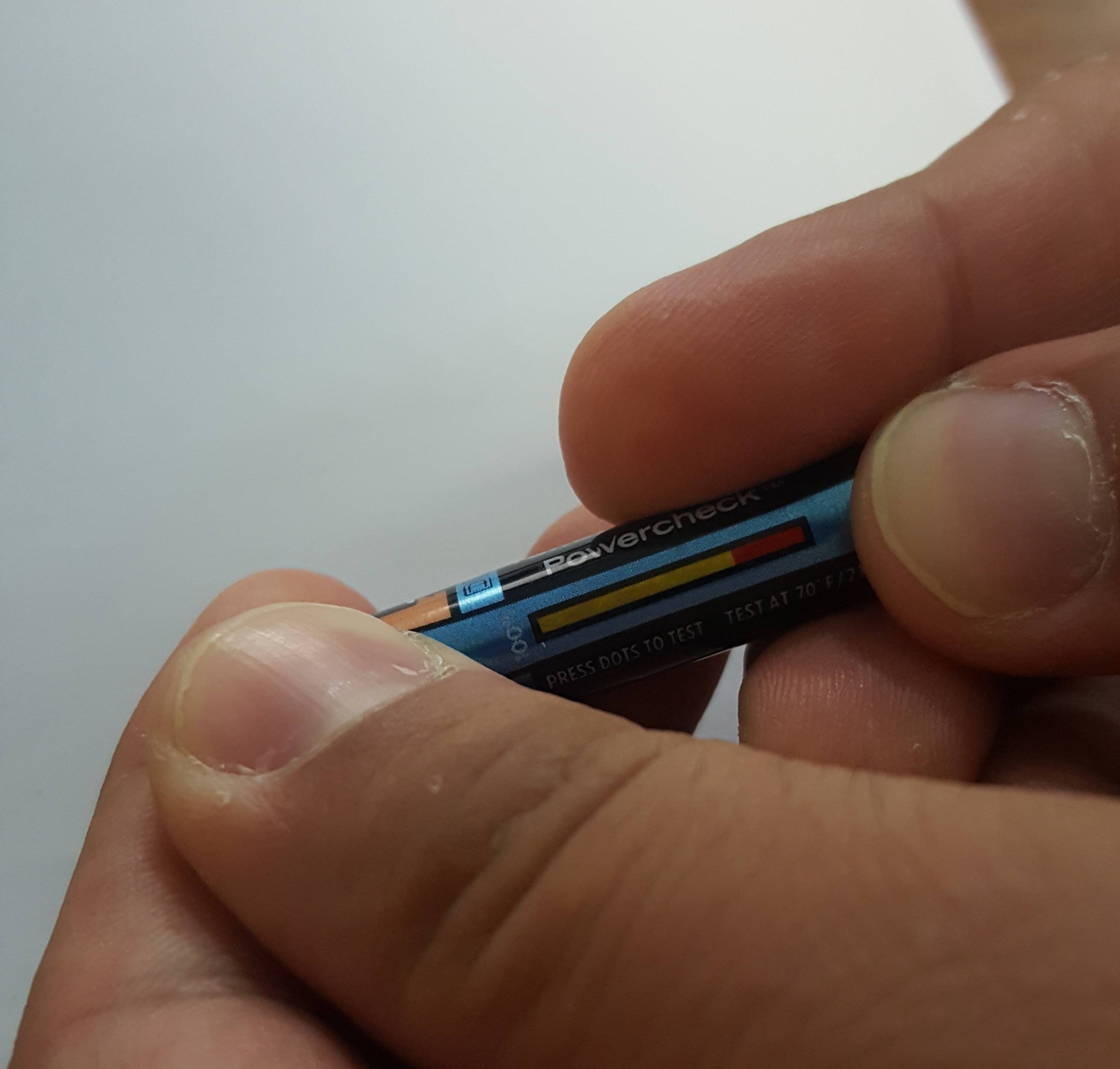 This one is a brand new battery, so it shows full.

I didn't even try Googling because of the risk of hitting a lot of fake information (I don't know why but I feel so). Anyway, I trust here, so I asked here.

As you press the points, a current will flow through a metal strip getting warm. The display is a thermochromatic one. So the increased temperature will result in a change of color from black to yellow or red in your case.

The strip has to be designed in a way so that the heating of the single elements corresponds to the state of charge. So at the bottom it will have a small cross section and at the top it will be a wider cross section, so that only a full battery will give enough current to heat the upper part enough to cause the color change.

This also explains why it isn't always on. It would drain the battery.

So this seems to be a question and answer with a lot of attention, so I went off to our old battery storage and picked up a Duracell AAA with powercheck feature and disassembled it.

Measuring the resistance of the whole strip wasn't as easy as I thought, but I got the most stable result with a reading somewhere between 2 and 3 Ohms. So it's quite close to a short circuit. Considering the internal resistance is really low at the beginning, you have around 0.75 W wasted to indicate the state of charge. (Around 560 mA with 1.4V and 2.5 Ohm)

The AAA battery would be dead in an hour.

The wrapping: Has another paper separator, providing space between + contact and the cylinder. The red stuff is some sort of insulation coating. And of course you have two metal contacts, one for + and three smaller ones for -. 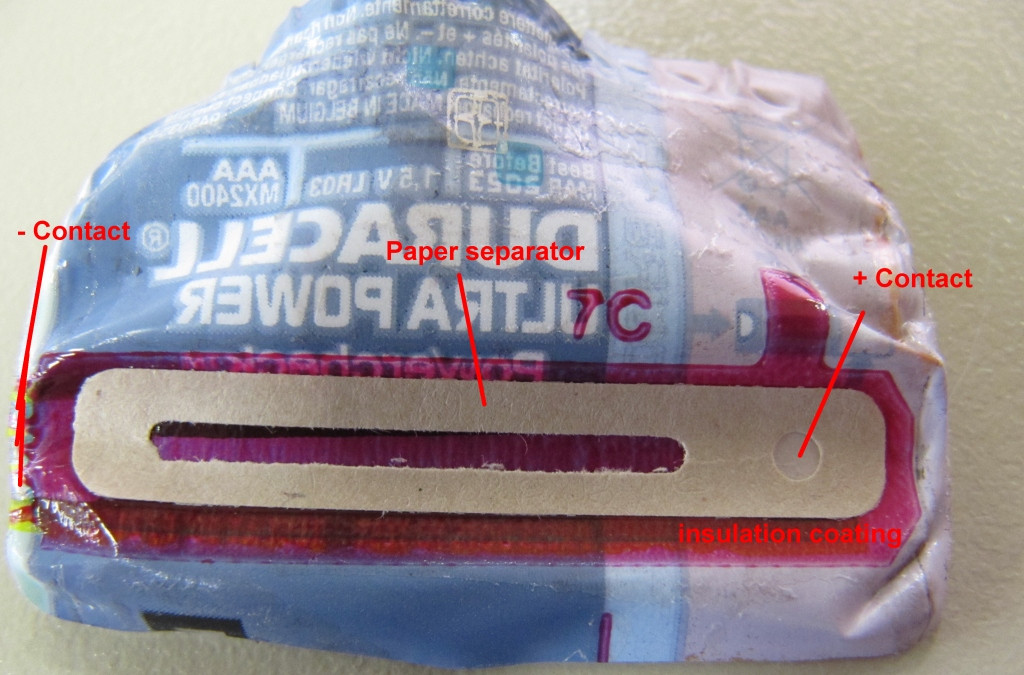 And below the coating we can make out the metal structure: the metal is still behind a cover of some blueish (teal?) coating. But as predicted, you see that the track is rather narrow at the bottom of the scale and gets wider to the top of the scale.

Thinking a bit more about the paper separator on the wrapping and the long cutout lead me to the following conclusion: The long cutout provides an air cushion below the metal strip acting as a heat insulation. Probably even the paper would have enough heat conductivity to cool the strip significantly, maybe it wouldn't even work.

Not the answer you're looking for? Browse other questions tagged voltage-measurement battery-chemistry capacity or ask your own question.

7
How does a voltmeter work?
2
Cannot understand how does Arduino memory work for program code
0
how to compute channel capacity
11
How does a non contact voltage tester work?
1
How does charge/discharge current increase battery temperature?
1
Does any of those internet tips to recondition Li-ion batteries actually work?
1
Do Duracell AAA batteries have internal short circuit detection?
0
LM339 Lipo Battery Voltage Tester Circuit - How does it work?
0
When does a x100 2000V scope probe not work at 2000V?