I need to calculate the lower cut-off frequency of an amplifier with a transistor BJT. I have to analyze in isolation the Thevenin equivalents seen by each capacitor C1, C2 and C3. 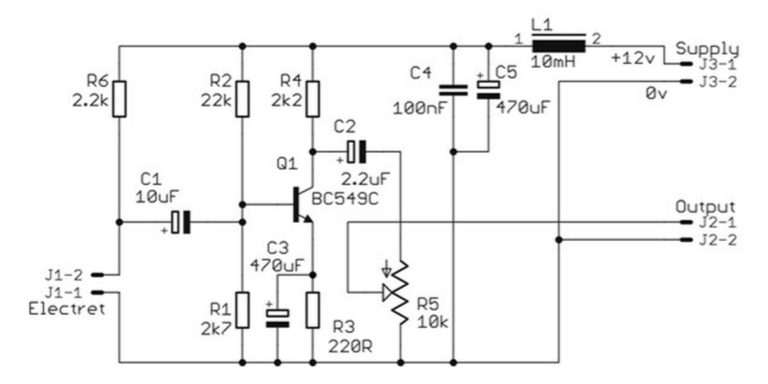 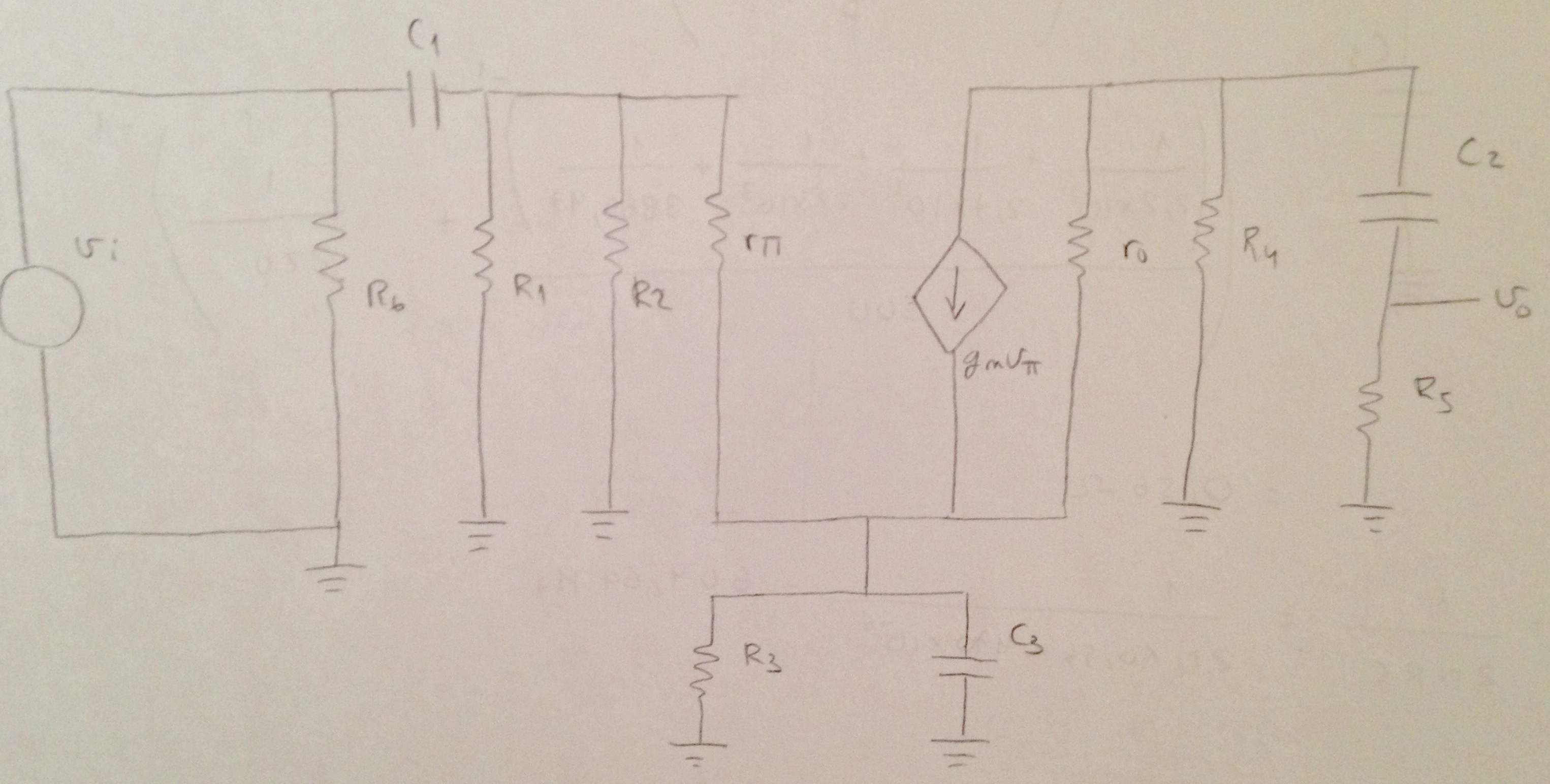 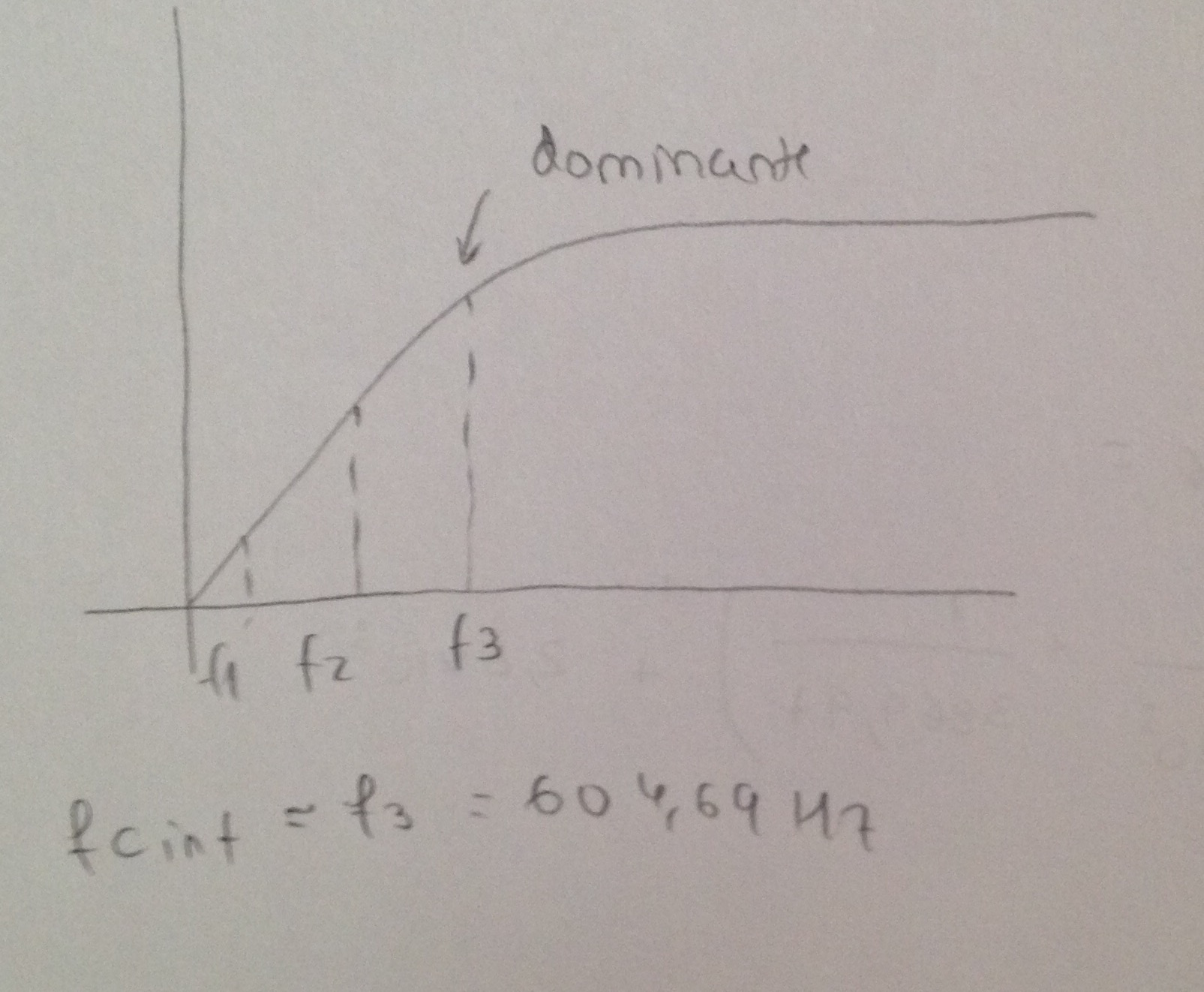 Could you please confirm if my calculations are correct? And if I calculated the Thevenin well?

First, here is your circuit that we are discussing:

There are three seperate and mostly independent high pass filters in this circuit.

From the signal at J1-2, C1 works against the parallel combination of R2, R1, and the impedance on the emitter reflected back to the base. R2 // R1 = 2.4 kΩ. However, the emitter impedance reflected back to the base is dependent on the actual transistor gain, so we can only guess. This is not a good circuit, precisely because its characteristics are dependent on the transistor gain.

With the electret microphone and R6 pullup as input, the impedance of the signal at the left side of C1 is R6. This adds to the overall impedance C1 is working against, for a total of 4.6 kΩ.

C3 and R3 form a different kind of high pass filter. At low frequencies, the gain is set by R3. At higher frequencies, the gain goes higher due to C3. Eventually it gets so high the transistor can't support it for other reasons, and the gain flattens out. As I said, this is not a good circuit, mostly due to a capacitor directly between the emitter of Q1 and ground.

C2 forms a high pass filter against R5 and the impedance of the signal on the collector of Q1. Again, the impedance around the transistor is hard to judge, but can't be more than 2.2 kΩ at the collector due to R4. To evaluate this as a audio amp, we'll be conservative and see what only C2 and R5 result in. That's 7.2 Hz. Taking the impedance feeding C2 into account will only make that go lower.

So we have three high-pass features in this amplifier at roughly 2 Hz, 1.5 Hz, and 7 Hz. Even though there will be variation in some of these due to the gain of Q1, we can conclude that most of the high-pass characteristics are well into the pass band at the lower audio limit of 20 Hz. So while the gain and frequency response is somewhat unpredictable due to bad design around the emitter of Q1, at least is appears the high pass filters are properly placed to not interfere with even "HiFi" audio.

An Electret Mic IS NOT A VOLTAGE SOURCE.

It is an open drain JFET amplified current source with ac and dc output where voltage drop from internal drain (+) across external pullup Rd is; 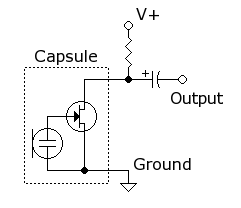 Once you study and memorize the impedance formula in the link below it becomes quick and easy to do on an RLC nomograph.

(We used these all the time) with many sheets of paper and pencil.

Then find the intersection of R , C and f. Pick any two knowns to find the unknown variable.

You can zoom and print or use Irfanview to crop for more resolution.

Keep in mind if the ext. load is line input=10k , your Pot impedance changes R5C2 with setting. Also Zb1=Zbe*hFE where Zbe=(Rpi+R3//C3)hFE may affect your input load.

This is one of the best teaching sites for BJT configurations. http://people.seas.harvard.edu/~jones/es154/lectures/lecture_3/bjt_amps/bjt_amps.html

You did ok except wrong because electret is not a voltage source but actually a current source using FET drain. So AC equiv. model R6 in series for transfer function, Since R6 actually controls the gain of the FET current source (and DC Q point)

Note that you need Source and base input impedance to compute attenuation before gain. Then load on collector to get gain. Even with fixed current gain it gets messy. This is why we use multi-stage designs with R ratios to stabilize gain and DC Q point, so realize that analysis of a simple H bias common emitter is not always that simple and it gets easier in future better designs. Impedance Ratios is the key to a better design that do not rely so heavily on Vbe and hFE..

In this design the attenuation is about -6dB before the base since electret drain R is about equal to the Zin, but the huge emitter cap and small Re impedance is multipled by hFe to the base, but not enough to neglect with these values. Then the real circuit has hFE changing with Ic and Vbe so signal levels become distorted. I would never consider using this H design except when signal levels are known and fixed and I was desperate. So I sympathize with your goal to learn and suggest the link provided here is better. (but we try not to do your homework)

2
Dependence of transistor current gain on operating conditions
3
How is this preamp design?