What percentage of losses occur in conversion from DC to AC?

Things seemed to be working fine, until I recently found out that I could connect that inverter to the laptop via USB and check different readings.

When I did that, I was amazed to see that it was showing the current coming form the PV (solar panel) is about 550 W. This was when the sun was right in front of the panels. I called the guys who fitted it to see if one panel was dead or something, they checked, and turns out they are all giving 8 A each, so I thought there could be losses in the wire that is connecting the panels to the inverter, however, we checked the voltage right before the wire coming from the panels is plugged into the interver, and it was showing 32 A @ 32 V which is about 1000 W.

The issue is, the inverter still insists that the current coming from the PV is around 500 W.

If I put a load of about 700 W (by turning on all the fans and lights) it starts drawing current from the batteries.

Is this normal? Should I get the inverter checked? Here is the screenshot of the app that came with the inverter showing all the information. 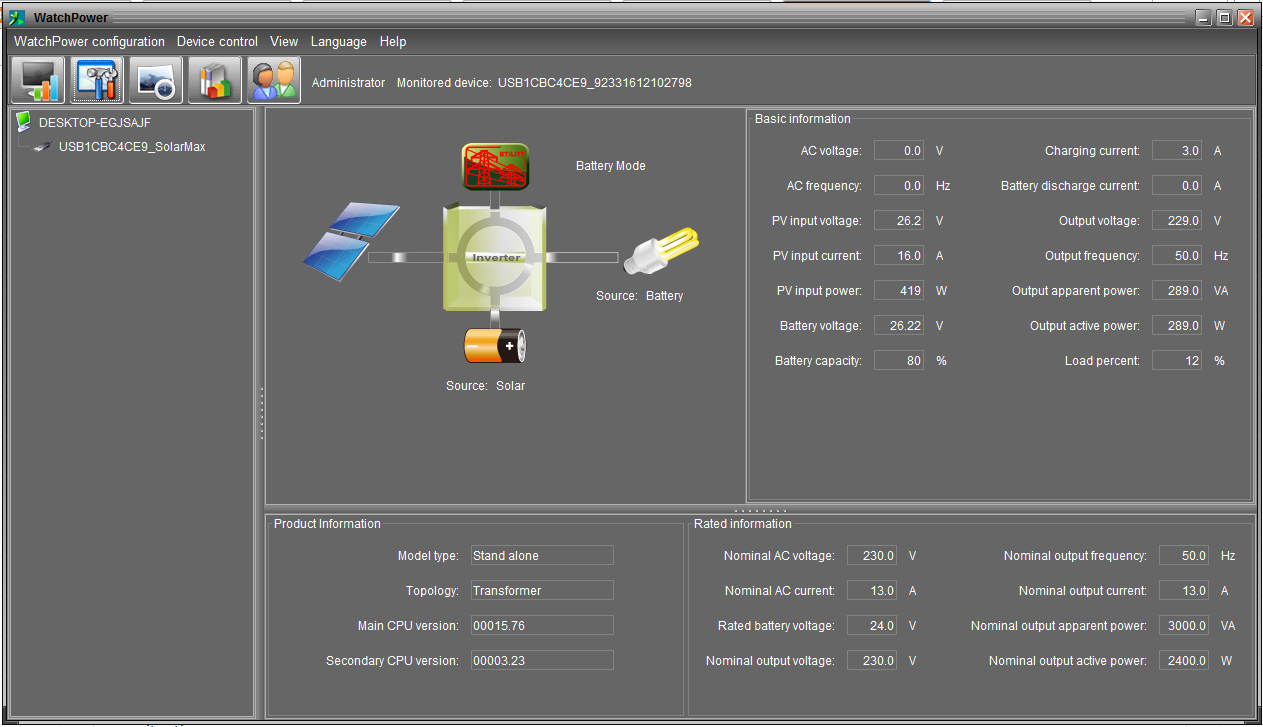 In the screenshot that you posted your inverter is consuming 416 watts (26 volts * 16 amps) from your panels. Some of this is going toward the AC load on the inverter (289 watts), some is being used to charge the battery that is at 80% of capacity, and the remainder is inverter/charger inefficiencies. Nothing seems out of order.

In an inverter/charger system, you have two primary sources of inefficiency: the battery charging circuit that must regulate the solar panel voltage to match the desired charge voltage profile and the AC inverter that converts the DC bus to AC. When you are drawing power from the battery, you are effectively multiplying the efficiencies (1-inefficiency) of these two subsystems albiet over a longer time frame generally.

If you would like to test your system more rigorously, pick a day when there is full and directly overhead sun. Make sure the battery is fully charged so that all solar power is available for the AC inverter. Make certain the solar panels are clean. Then start to add AC loads to test how much power your system is able to deliver from solar alone.

Your solar panels can only provide 1000 watts (4 panels * 250 watts) of power to the inverter. And this is under optimal conditions. If you assume 90% inverter and infrastructure efficiency, the maximum power the solar alone could provide is 900 watts. After that the inverter will begin to draw power from the battery. If we assume 5 hours of usable sunlight per day, this means that your system is capable of supplying a maximum of 4500 Watt-hours of energy on an average daily basis. If some of this is drawn from the battery, this number is reduced due to the stacked inefficiencies explained earlier.

Not the answer you're looking for? Browse other questions tagged solar-cell low-power inverter or ask your own question.