Confusion with the relation between SNR, voltage divider and amplifier concepts

Imagine you have an input signal s(t). And the signal of course has some noise n(t). So lets say the SNR value is x.

Now if we attenuate this signal by a voltage divider by 100 lets say, will the SNR of the attenuated signal remain same or?

2-) And in the second case I log the voltage with same resolution "after amplifying this signal by factor 10" which means I log as -1V to +1V.

Neglecting the amplifier's noise contribution, which way is better in practice? Why?

Here is the thing, noise is actually a misnomer, signal distortion is what it should really be called.

Every time you pass a signal through any component or even a trace of wire, the signal that comes out the other end WILL have some distortion compared to the original signal. Some of that is "filtering" and "reflections" some of it in cross-coupling from other signals outside of the intended signal path (noise).

If you can pass your signal with a signal to noise ratio of X through an ideal divide by 10 resistor divider, your signal would still have the same "noise ratio" of X.

Unfortunately, in reality there is no such thing as an ideal anything.

After division the signal will be distorted a little by inductances and capacitances and the physics of the resistor itself. Further, you just built a signal mixer to add in whatever noise is on the ground side. How much distortion is introduced depends on the quality of the circuit and the nature of the signal. The "noise" distortion could be lower but usually it will be higher.

Reducing a signal level is generally something to be avoided. As I already mentioned, you are actually mixing in the ground noise, but you are also producing a signal that is now more SUSSEPTIBLE to the ambient noise in the system. As such, if it is absolutely necessary to reduce a signal to feed into some device, like an ADC, it is prudent to do that reduction as late in the signal processing chain as possible, and physically as close as possible to the ADC.

As for feeding into an ADC.

ADCs compare an input signal with a reference signal. Obviously, if the reference is noisy you will get LSB comparison errors. If there is an ambient noise level, then that can couple into and produce a larger "noise component" on a low level reference compared to a larger reference. As such, ADCs work better in general at the larger end of their acceptable signal range.

HOWEVER: That does not necessarily mean amplifying the signal so you can maximize the reference of the ADC is the right thing to do. If that same noise is coupled into the signal you are trying to measure before you amplify it, you are back where you started, but now the signal carries the added distortion of the amplification.

There is a balance in there somewhere. Ultimately, the best method is to limit the number of times you have to mess with the signal on it's way into the ADC and keep the ADC's reference at a level that you can tolerate the reference noise. Less "messing" also limits the effects of component tolerances. And of course, keep the signal and reference as "quiet" as you can. Some circuit tuning is often required to optimize the ADC chain.

Cost can often be also be a limiting factor. More accuracy generally means more cost. Part of the design process also involves deciding how much error you can tolerate and how much extra cost you can afford to get there.

With a signal that is ten times larger, the quantisation noise from the ADC will be about ten times lower. On the other hand, if the x10 amplifier has an error of 2% then you will have to factor this into the bigger picture because it may represent a more significant error than just ADC quantisation noise. Amplifiers may not be perfect spectrally either so again, it's another error to consider. Amplifiers can also produce offset voltages that add an error.

In short, the most appropriate measures are specific to the application and generalisations are just that.

Generally if quantization error is much less than 10% of Vpp noise (best case) then gain does not help significantly as SNR only degrades a bit.

So a 10% quantization error of noise peak contributes a loss of 0.8dB in SNR in both cases.

(which is my definition of a wee bit)

The more technical solution is defined as follows;

where all values are given in dB and

Effective number of bits (ENOB) is a measure of the dynamic range of an analog-to-digital converter (ADC).

Do you need to amplify? 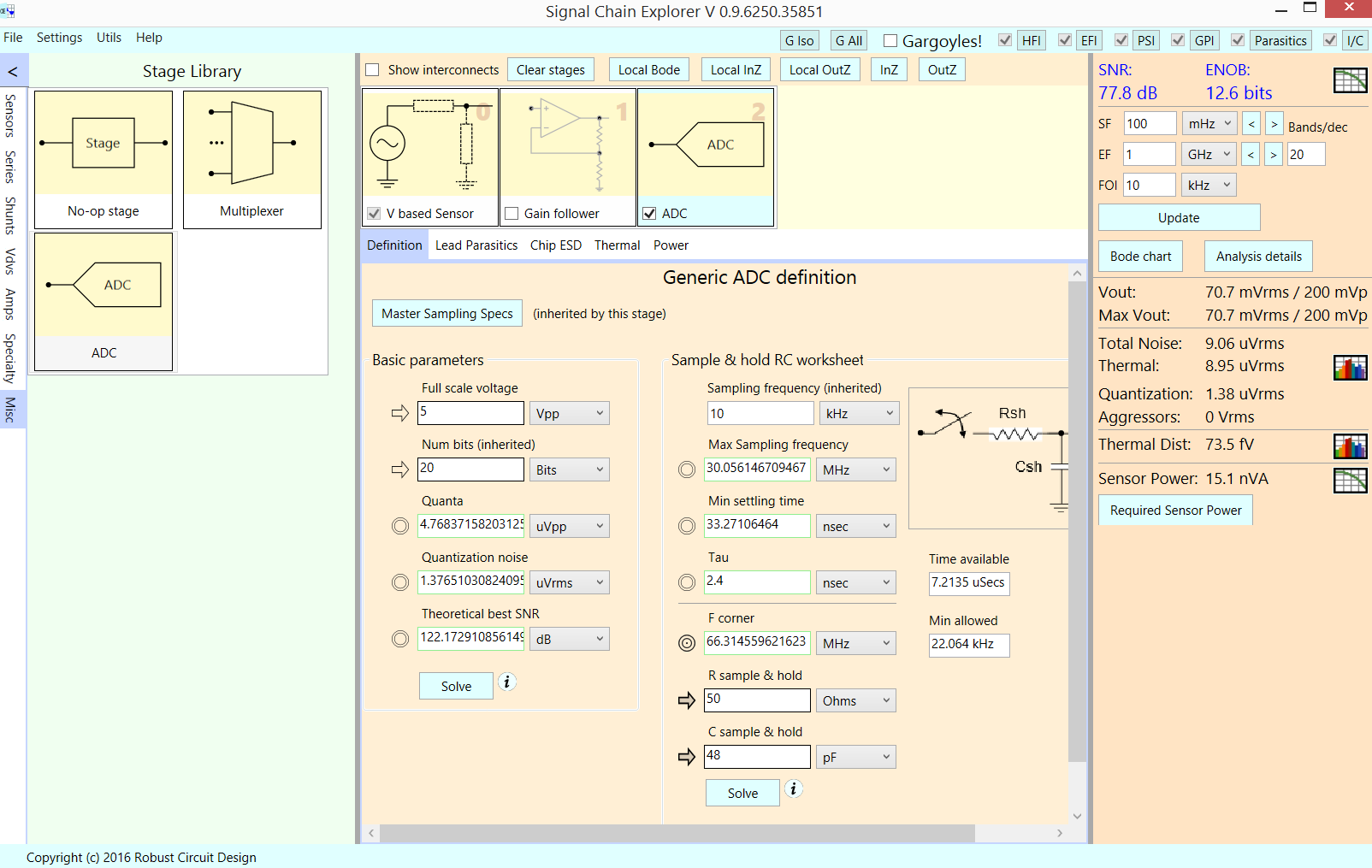 Not the answer you're looking for? Browse other questions tagged signal-to-noise or ask your own question.

7
Attenuator noise figure and loss
3
How to characterize SNR for an amplifier with extreme low input signal?
0
AD620 voltage noise and ADC SNR calculation
5
How to select gain for an amplifier before ADC?
1
Differences between preamplifier, instrumentation amplifier and LNA
1
How does using double antennas (one with delay) and adding their output help the SNR?
1
Limiting Current interference in Photomultiplier Amplifier Circuit
1
Is the use of a lock in amplifier with a signal generator appropriate and practicable?
2
What is the difference between SNR of a wideband system and the SNR for a narrowband system
6
Charge, Voltage, or Current? What can be measured with the highest SNR?