I'm copying the recommended circuit (the 'Higher Performance' one, actually) from the LM1971 audio attenuator datasheet but there are audible (loud) pops on the output. 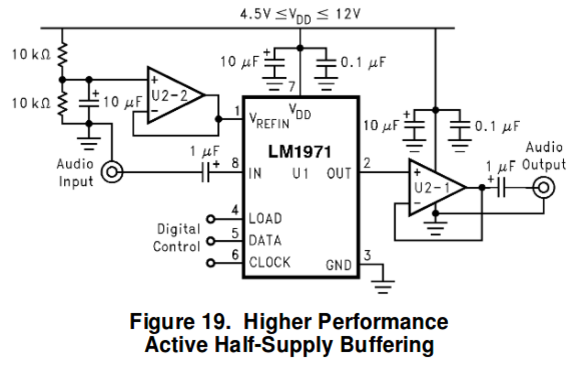 I'm using OPA227s for all op-amps -- one shared VREF buffer and one output buffer for each channel -- and a regulated 12V supply. These op-amps have a very low input bias (+/-2.5nA) and high input impedance (10^7Ω), which should prevent these pops according to the datasheet:

I'm only stepping 1dB at a time, as the datasheet also suggests. Does anyone see where I'm going wrong, or where else these pops could be coming from?

EDIT: I believe what I'm experiencing is zipper noise, which is prevalent in discrete volume-changing circuits such as this. Analog devices provides a zipper noise reduction circuit in a few of their digital potentiometer datasheets which seems to only allow the step change to occur when the signal is low enough: 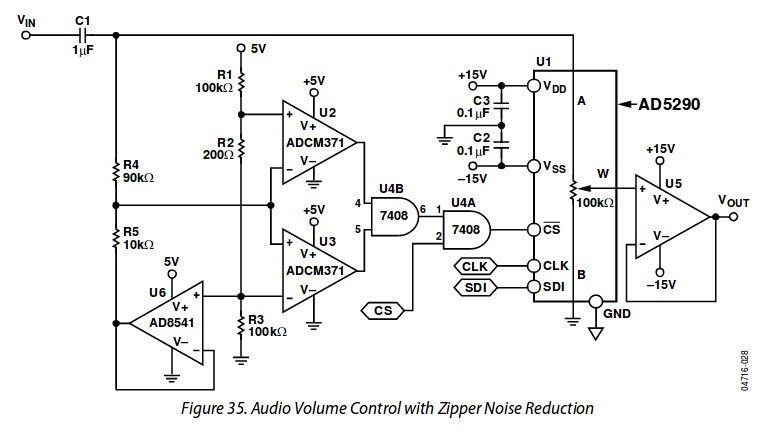 Unfortunately I can't fit this on my PCB but I'll give it a try sometime to see if that fixes things.

Digital pots targeted for audio applications typically include a zero crossing detector which will only allow the volume change to take place at zero crossings. This ensures no clicks/pops or other noises are heard.

Not the answer you're looking for? Browse other questions tagged operational-amplifier audio attenuator or ask your own question.

1
How to increase the output power for this audio amplifier?
1
High impedance opamp attenuator
0
Headphone Audio Noise
0
using the mcp42010 for audio attenuation
0
Attenuator with strong bias
5
Reasons for choosing a transistor instead of an op-amp as a buffer
1
Audiable pops when switching DC biased audio signal
1
Why is a Instrumentation Amplifier Necessary for A Wheatstone Bridge (small signal circuits)
1
Where do input bias currents flow and what voltage drops do they create?
7
Non-linearity of op-amp attenuator