Installation of an AC Drive on a Plastic Extruder

We operate a Plastic Extruder for reprocessing plastic waste.

Currently, the motor is started by a "Star Delta" Starter and provides a screw rpm of 51.42.

Currently, when we start the motor, the motor consumes approximately 60-70amps in the "Star" phase.
Upon entering the "Delta" phase, the motor's current consumption varies between 17 to 25 amps.

Considering that the motor is barely taking enough load and that our extruder fails to meet its target throughput, we are contemplating the introduction of an AC Drive to enable us to increase the screw rpm.

We intend to alter the pulley ratio, such that at 70% speed, the screw runs at 51.42rpm. Thereby giving us the ability to increase the screw rpm gradually, taking it up to 90-100% speed, depending upon the type of material being processed.

Although I believe that I have an elementary understanding, several attributes such as "Low Overload" and "High Overload" on commercially available AC drives confuse me. Furthermore, I'm on a very tight budget which limits my options tremendously.

The most cost effective AC drive that I could find in my local market is the Siemens V20. The drive's rating can be found in the table below: 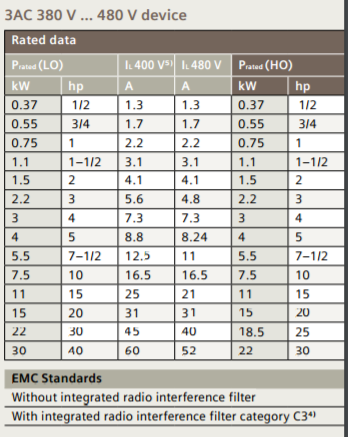 Considering that our motor is not taking enough load, would the above Siemens AC Drive that is not high overload at 40hp (see above table) work for it?

Thank you for your time and assistance.

Changing the pulley ratio will reduce the output torque by 30 percent. Since the motor runs lightly loaded at maximum speed, that will probably not cause a problem. The torque required to drive an extruder should be essentially the same at 143 percent of the current speed as it is at the current speed.

Starting torque could present a problem. The torque required to start the extruder may be higher than the normal operating torque. The torque due to inertia should not be significant. Higher torque may be required to overcome static friction and get the drive train and extruder moving from standstill. If a significant portion of the heating of the material in the extruder comes from the mechanical friction and compression, high torque may be required for a cold start.

With a "low overload" VFD, no more than rated motor torque will be available for starting. A "high overload" VFD could provide 150% of rated torque or perhaps a little more. To get even 100% torque for starting, a "sensorless vector" VFD is likely required. The V/f control schemes are not likely to be sufficient. If "FCC" is a sensorless vector method, that should provide 100% torque at rated current for starting. Look carefully at the manufacturer's description of starting torque performance.

We are discouraged from answering questions about what to purchase. In general, it is a good idea to consider manufacturers with good reputations that sell globally. However it is also beneficial to consider local suppliers that have brands that have good local reputations. A local supplier that can give good advice can be very valuable. There are many VFD brands that have good reputations. There are models that are intended to drive fans and centrifugal pumps. Those models are unsuitable for constant-torque loads like extruders.

Q: What is the motor rated current, voltage. What is the desired frequency of the motor. Is it still 50Hz (nominal motor speed rpm) or it will change, since you are thinking to change the reduction ratio?

The drive has to output the torque: \$M_{mot}=J\cdot\alpha + M_{load} \$, where \$\alpha\$ is the acceleration. If you set ramping time enough large, then the torque needed for mass acceleration is enough small. The motor will have to output mostly the required load torque. Which in your case (extruder): \$M_{load} \propto \Omega\cdot F\$ where \$\Omega\$ is the speed and \$F\$ is the material friction. Note that when using VFD vs. star/delta starting, the induction motor "knee" characteristics is quasi eliminated using VFD. The term quasi is referring at possibility of the VFD to stay within the window of the characteristics where the slip is small.

Starting the motor with heavy load, would require that frequency of the inverter doesn't escape to much from actual motor speed. If so, then you have almost identical problem like with star/delta starter. I would suggest you to use a different type of inverter, that has the capability of Vector control. This is Sinamics G120.

I have done an application, that compresses the material with VFD. The motor is spinning very fast until it begins to compress the material, the final speed is approx 20Hz. The VFD self adapts the frequency so that outputs rated current. It's an G120 inverter, but there are many other manufacturers like Mitsubishi, Omron, Yaskawa,... that have vector drives.

EDIT2: I have checked the Siemens catalogue, well the V20 series is very basic inverter for pumps, conveyors...it is switching PWM at 2kHz.

MY application consisted in material compressing with vector control G120. The toughest test to compress the material to insane small dimension, so that inverter went in overload error. The tensioning is done with screw lead and nut, so when the inverter stopped due to overload the material wasn't released. After a while the machine was forced to repeat further compression. Therefore: the material was already compressed, the required starting torque was well above the nominal torque. The motor moved and then tripped again into error. This is a proof that with sensorless vector control the motor was able to start turning even in overloaded condition. Of course it stopped very soon, since further moving increased the required torque even more, but you shouldn't be worried to use sensorless vector control to start the motor heavy loaded. But if even this is not good enough, then a reserve plan is to use an encoder feedback for speed (if the VFD can accept the encoder mount).

Similarly check Mitsubishi A700 FR-A740-00570-NA inverter. It has the possibility to hook an encoder. The Siemens would need a control module CU250S-2 instead of CU240-2 for the possibility of an encoder mount.

Maybe Lenze series 8400, Hitachi SJ700D-220 HFEF3, ....There are many of them. You should ask for local dealers and opinions. The final price won't be low (3 to 4 times higher than Sinamics V20), so any good dealer won't hesitate to contact you and give the best price.

Not the answer you're looking for? Browse other questions tagged motor ac frequency variable drive or ask your own question.

2
Control of a coreless DC motor using a PWM and a mosfet
2
Installation of an AC Drive on a Mixer - Help
1
How does a DC motor drive control the motor?
1
Make a DVD drive turn the other way around
0
Colpitts / Clapp oscillator crystal drive level
0
Avoiding RCD tripping with Inverter Drive
0
Connecting a three phase drive - Should N connect with L3?
0
Replacing an AC drive in my mill and the use of a magnetic contactor in the power supply line