Easiest way to extend a pulse

I have been messing around with my cars ignition. I know a lot about cars, but I haven't learned much about electronics. When I did study electoincs it was almost 20 years ago.

Anyways. The car's computer sends a 5 V square wave signal for the cars igniter to charge and fire a coil. There are 6 clylinders, and each one has it's own signal and coil.

I was finally able, and one of the first to do so, to use non-factory coils and not use the car's original igniter. My new coils have their own igniters. And they don't really care if it is a square wave or not. I just need to send at least a 4 V signal to the coil and it will charge up and fire when the signal is gone. Even a 12 V or higer is OK too. 5 V is standard for these coils and my cars computer already sends 5 V signals.

OK, so..in summary what I want to do is:

Take a 5V square wave signal that varies from about 3.3 ms to 2.2 ms, and extend the falling edge of it about 1.7 ms or, make each of these pulses a flat 4-5 ms pulse. The new pulses don't need to be perfectly square, as the new coils don't really care about that. the coils have 4 wires to them. A 12 V source, a trigger wire, and 2 ground wires. I know I can probbably do this with six 555 timers, but I really don't want six of those. A single or maybe 2 ICs would be OK, or maybe a capacitor connected to the 5V signal wire. I can also make the 5 V signal a 12 V signal, and use a capacitor, then the capacitor will charge up at the same time my coil is charging, once the signal from the computer stops the capacitor will discharge and keep the coils igniter triggered a little bit longer.

If I can add all of this together to create my fake signal to the computer and also extend the 5 V signal pulses it would be the perfect thing.

Does this sound OK? Or what is the simplest method?

If I could extend it by anticipating the rising edge it would be ideal. I don't see any easy solution to that. So once the ECU sends the signal, I want to make it longer. To make it easier the signal doesn't need to be square anymore. The triggers on the new coils are pretty sensitive. A 555 timer did great at test firing them.

I thought about the monostable circuit using some 555s. I think I have about 20 of them to play with. I guess I can set up 6 of them and see if I like it. I think I have only seen up to a dual monostable capable IC. I had thought of the Schmitt trigger also, and something with a capacitor and resistor.

I thought about adding a capacitor and it will give the square signal a longer duration, but not so square looking of a wave, then a Schmitt trigger can fix it to be square again.

The factory igniter box works like this. Lets consider only cylinder 1 for the example. The ECU sends a signal to the igniter, 3.3 ms at idle, 2.2 ms at higher RPM. The factory igniter sort of pauses and connects the ignition coils ground about .7ms later. As soon as the ECU stops sending the signal, the igniter immediately cuts off the ground to the coil causing it to fire.

The igniter senses current flowing from the ignition coil and passing throuh the igniter to ground. When current flows through the coil and out the igniter to ground, the igniter dips the Voltage of a totally different wire connected between the ECU and the igniter box. So, there are 7 wires directly connected from the ECU to the factory igniter box. 6 of them are the 5V square waves for firing the coils. The 7th wire is always a constant 5 V. It's called the Ignition Confirmation Signal, Toyota abberviates it IGF. When the igniter senses current passing through it, it grounds out the 7th wire. It only grounds it out for about 1.5 ms, this is no matter how long the dwell is.

If the ECU misses a few of these signals it shuts down the cars fuel system. It does it really fast too. So I am doing pretty good so far, the car ran really good today. I won't say how fast I took it today, but the Audi messing with me quickly disappeared in my rear view mirror. I can do all of this if I was one of the guys replacing the factory computer with an aftermarket computer, but good ones go for much more than a $1,000. My car is a 1994 Totota Supra, twin turbo, 6 speed. Right now it's only about 415 HP to the rear wheels, but its enough for me. I'm not seeking more. I just replaced my old bad coils, and new factory ones are about $100 each, no thanks. My new coils need a little bit more dwell. Most people on many kinds of cars say 5 ms is the ideal dwell, after 5 ms it doesn't charge up much more. So I'm shooting for that.

I have ordered some components to try two methods. I will try one with a monostable circuit, and I will try the hex Schmitt trigger with a diode, capacitor and resistor. Making it work both ways can help me learn something and accomplish want I wanted.

You can use something like this for each channel.

Here's a quick solution using an HC132 which is one of those weird components to have around: 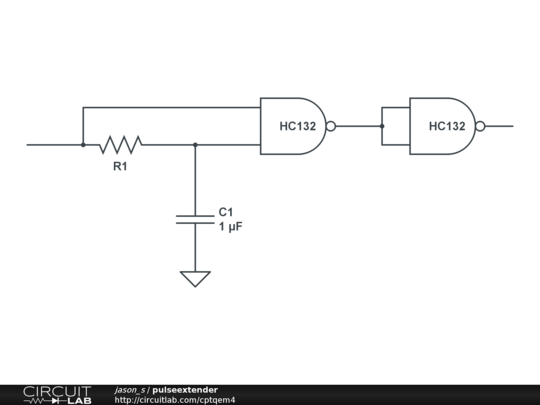 To extend an active high pulse, move the 2nd HC132 to the input.

You need to characterize the output voltage vs dwell time or pulse width, but to answer your simple question, the solution is called a one shot, which can be implemented in dozens of ways and in 2 basic modes. retriggerable and non-retriggerable with edge trigger (See mono-stable multi-vibrator= one shot) try this. $0.63 http://www.nxp.com/documents/data_sheet/HEF4047B_CNV.pdf stock at D-Key

or get the dual version sorry no hex one shots

If you prefer discrete solutions with 2 Q, 4 R's and 2 C but more work, that is possible too. Another is a D Flip Flop which is clock edge sensitive for leading edge and RC delay to reset for your desired pulse width to the V/2 threshold

But I think the easiest solution is scope the ignition module and increase the differentiating Caps that create the one shot to desired width.. but I cant say your intent makes sense, but it should increase the arcing voltage.

The OP has a problem that has been ignored by him and consequently in the answers.

He writes "fire when the signal is gone" which means that the timing occurs on the falling edge. Where I think the OP is hoping to just increase the "charging" time of his new coils he will also delay the firing time. Either by a fixed amount of time or a variable amount of time that would cause very real ignition timing problems unless they were compensated for elsewhere.

This may be a misunderstanding but that seem unlikely in this case. However the original factory engine management system may be deliberately altering the "charging" period to change the spark energy but this is unlikely, more likely it starts the "charging" period based on some crankshaft angle reference and then fires the coil based on the ignition timing lookup table.

The various delay circuits proposed should work mostly as advertised but may cause unexplained ignition timing changes and variability due to engine RPM.

However as indicated on one comment at High RPM it seems that there will not be enough time to charge the coils this is not the case as a 4 stroke engine needs 2 revolutions per spark so will have twice as long and within the limits.

There may be a remedy and this is to extend the sparking period to say 3ms (or something between 2 and 5 ms I expect) and then switch to charging which may now be much longer at low RPM but close to the desired minimum at high RPM and then use the falling edge to create a spark pulse starting at the correct instant.

The only drawback here is that the charging period may be even longer than usual at low RPM and cause unnecessary heating of the coils but perhaps this is something that is acceptable. The given timing circuits (like @jasons explanation) could likely be adjusted to this kind of functionality but my fuzzy head is not up to the task just now.

Not the answer you're looking for? Browse other questions tagged signal or ask your own question.

3
Easiest way to make printing head spray ink?
4
Turning OFF the grill when the espresso maker is ON
4
Simple RFID reader - AM demodulator not working
4
Want Square Waves based on Injection Timing of 4-Stroke Engine
2
3 wire signal to 4 core shielded twisted pair
2
Reduce signal noise detected by accelerometer due to interference from a motor (caused by reverse neutral current)
2
Bias T with pulse train
1
Adding a waveform on top of an LED driver signal