Diode not behaving as short circuit

I have a voltage source connected through a current limiting resistor to a diode and an inductor in parallel. As far as I know, a diode should behave like a short circuit when its anode is connected to the positive terminal of the voltage source. In this simulator something very strange happens: as I close the switch, a lot of current passes through the diode (and very small amount through the inductor) and after couple of seconds no there is significant drop of the current through the diode until it stops completely. Why is that? 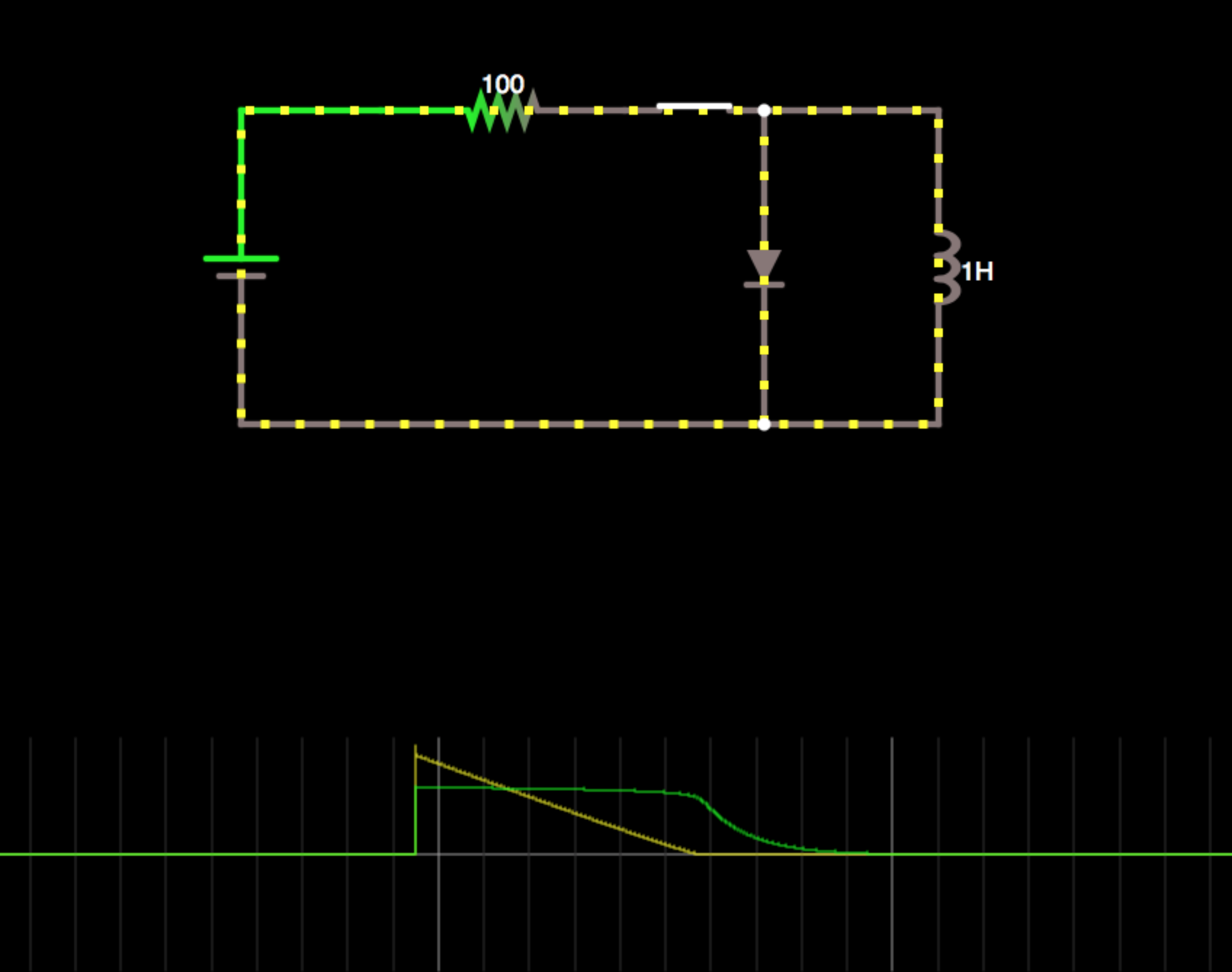 link for my circuit in the simulator: Link (click on the swtich to close it and watch the simulation)

As others have pointed out, a diode is not a "perfect" short (or open) circuit. However, if you understand its "limitations," then you can use the idealized behavior every were, except the limitations area.
For your particular circuit, you have to know that an inductor initially appears as an open circuit , and then as a short circuit after reaching steady state. What this means is that initially, your circuit behaves as if only the resistor and diode (in series) are connected to the supply. So the diode is forward biased and acts like a short.
As the inductor reaches steady state, the voltage across it goes to zero, and therefore the voltage across the diode goes to zero. Since the diode needs at least .6V to be forward biased, it stops conducting when the voltage on the inductor goes below .6V. At this point, the circuit behaves as if only the resistor and inductor (in series) are connected to the supply.
I hope you can now see that your simulator is showing the correct circuit behavior.

Yes the previous posters are right. To further clarify, a diode is not a short circuit but a threshold device, it starts conducting whenever voltage across it (when oriented properly to conduct) is greater than some value, typically 0.6V (but may differ for special types).
So it behaves like this whenever the voltage is lower than 0.6 V no current will flow and when the voltage is over this threshold current flows.

The inductor responds to sudden changes in current in a different way, it exhibits something called impedance, that is a way to say that while it has a resistance R it also has an inductance L, a component that is directly dependent on frequency.

So an inductor when suddenly connected or disconnected from a voltage supply reacts by spiking up voltage for a brief while and the current is initially almost zero, only to settle a brief moment later with smaller currents and voltages approaching zero.

The diode in the circuit sees this increase in voltage (while the current is still almost zero in the coil) and it closes, letting the spike flow through it, reducing also the excessive voltage on the coil and thus the large current in the diode that flows for a very short time.

A very common arrangement usually called a SNUBBER is what you will find in some switching relays or even solid state devices. Its function is to stop the excessive voltage spike from breaking coil insulation by conducting temporarily the large voltage spike and then to close as the voltage on the coil returns close to zero. I merely translated the above equations and observations in layman terms, hope it helps.

When enough time has passed, the inductor behaves as a short circuit and bypasses the diode. That means \$V_d=0\$ and no current flowing through the diode.

OTOH, at the precise time of switching, the inductor will try to keep its current (that happens to be zero because it is not energized). Because of that, it briefly behaves like an open circuit and all current flows through the diode, which will be forward biased until the voltage in the inductor falls below \$V_f\$.

In any steady state condition, there is no change of current against time hence, the voltage across the inductor MUST be zero.

Not the answer you're looking for? Browse other questions tagged voltage current diodes inductor short-circuit or ask your own question.

0
Short circuit parallel to current source
0
How to solve this diode circuit?
1
Trying to solve a RL circuit by hand but simulator calculates a value I do not understand
0
Measuring voltage drop across a diode in a switched circuit
0
Charged Capacitor discharge into LC circuit (with Freewheeling diode)
0
Is the voltage on the resistor always low when the zener diode is not in reverse operating region?
0
What happens when the direction of initial current through an inductor is opposite of the direction of applied current?
0
Inductor time variable current