In the Norton/Thevenin theorem, what is the definite difference between the load resistance and Thevenin/Norton resistance? 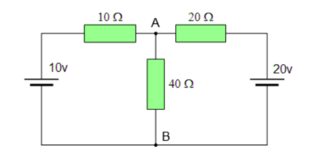 Here I know the load resistance is the 40 ohm resistor. But not really why. Is it because of the direct connection to ground? If the circuit was more complex, I might not have been able to see it as clear as in this picture, because I don't really know what qualifies 'the load resistor' to differ from the rest of the circuit.

In the example you've posted, we see two Thévenin circuits that share a 40-ohm load resistor. But the question is what differentiates between the "load" resistor and the "Thévenin" resistor.

I've redrawn the circuit below:

The Thévenin equivalent circuits are enclosed in boxes as shown.

Alone both Thévenin and Norton circuits have open-ended terminals. Whatever impedance is found across those terminals is deemed the "load" that the equivalent circuit is driving.

For a Norton equivalent, we would see the following circuit:

A load resistance is simply a resistor which is being used as a load for an electrical network.

Generally, the load is the something that is connected to the output of an electrical circuit. It can be anything like a resistor, capacitor, inductor, LED or anything.

A Thevenin/Norton resistance is the equivalent resistance of the network when looking from the output terminals by shorting voltage sources and opening the current sources.

Now coming to your circuit,

Here I know the load resistance is the 40 ohm resistor. But not really why. Is it because of the direct connection to ground?

It's not because of the direct connection to ground but the given terminals \$a\$ and \$b\$. Basically, in Thevenin/Norton theorem analysis, we assume the resistor connected in between the terminals say \$a\$ and \$b\$ is the load resistor.

Thevenin & Norton Resistances are the same.

The difference is whether you model the circuit with a Thevenin-voltage-source or a Norton-current-source.

This page should help you

These theorems are usually used to find the current through (or voltage across) "LOAD" resistor, obviously Load Resistor is one through which you wish to find current (or across which you wish to find voltage drop). Obviously, Choice is yours!!! Ultimately you will have Thevenin's and Norton's equivalent circuits which are nothing but either a voltage source or current source with their internal resistance, connected across the load resistor.

With Ref. To question fig. you posted, anyone of 3 resistors can be considered as load resistors while obtaining equivalent Thevenin's or Norton's network, you have to decide through which resistor you want to find current.

I can also find Thevenin's and Norton's equivalent circuits across other two resistors and I will still be right. The original question which you have to tackle is not "Difference between load resistance and Thevenin's resistance" but "Which shall be my load resistor?" and the answer to that lies in "your requirement." Suppose if you were told to find current through resistor connected to +ve terminal of either battery and node A, you'd have selected that resistor itself as load resistor.

Actually the reason of calling that resistance as load resistance is the Thevenin's and Norton's equivalent circuits. As I said earlier, these are the simplified forms of complex network; containing either single voltage source or single current source (with internal resistance) supplying the load resistor. So the word "Load" has originated from these equivalent networks and not from non-reduced ones and thus you don't have to worry about predicting "Load Resistor" in non-reduced network, you just have to know which current or voltage you want to find.

Not the answer you're looking for? Browse other questions tagged circuit-analysis thevenin linear norton or ask your own question.