I'm trying to build a lighting system that will give me 24 hour control of some RGBW strips using a Raspbery PI Zero.

I'm a software guy, so I'm pretty new to the electronics beyond a bit of work on cars and wiring the odd plug/light fitting. There are a few tutorials for wiring RGB strips with PI and Arduinos and they're all pretty similar, using the GPIO to trigger Mosfets to provide the 12V needed for the strip.

I've been mainly following this tutorial here, but adding an extra Mosfet for the white LED pin. 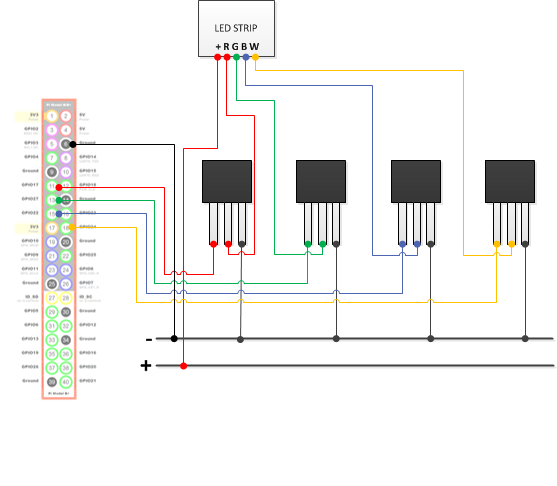 I also installed pigpiod on the PI using method 1.

When everything is up and running it lights up: 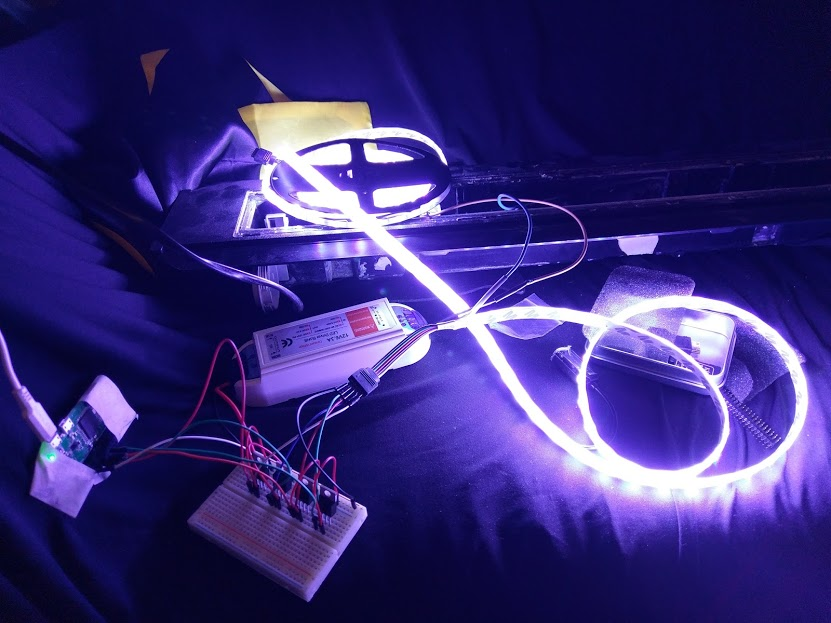 However, I'm finding it is always seems to be fully lit. When I try change the levels via the GPIO pins using commands like this (turn it off):

Basically nothing happens and it stays at 100% output on all channels.

My question: How should I approach debugging this issue? I've only got a cheapo multi-meter.

At first I thought Mosfets used the gate voltage to 'switch' the larger source/drain voltage. So when the output of the GPIO reaches a threshold, the mosfet switches 'on' and the 12V passes from source to drain.

I can't see how that would convert the (angalog?) raspberry PI signal from the GPIO to anything meaningful other than an ON or OFF 12V.

Is the Mosfet taking the gate voltage and amplifying the 3.5V to 12V proportionally? So 1.75V output (a value of 127) would produce 6V, and thus that channel would be 'half' brightness? (If it worked!)

I've wired just a single Mosfet up with a single colour on the RBG,

The center pin is to the RGB R channel. The right pin is to 12V- (ground)

Now, when I touch the left pin to 12V- (ground) it should turn off right? This is simulating LOW output (excuse the awful paint diagram): 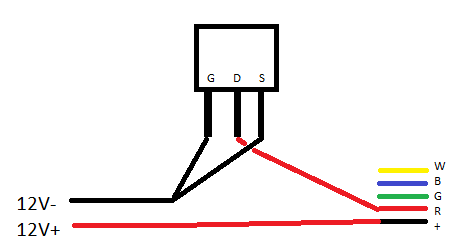 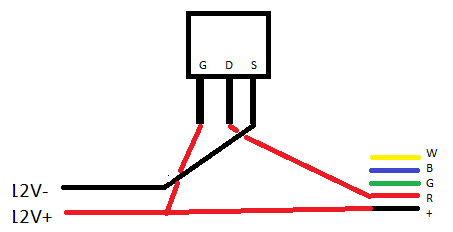 What I get is a bit of a mess. It's flashing on and off. Sometimes it's consistently off, but often consistently quite-low. Then, suddenly it's ON full, then flickers.

It kind of turns off more often than not when the ground is to source, and on more often than off when ground to +12V (or +3.3/5V output on the PI, not GIPO), but it's all over the place. Often it doesn't go 'off' just consistently very low, but even then its acting as if there's a loose connection or something - even through I've tried soldiering all connections.

I can't think of anything that would cause this but dodgy Mossfet? I could have caused problems soldering the connection on.

I may be somewhat bewildered, but probably because you were bewildered first.

They are not NPN (as in the title). They are MOSFETs :)

How should I approach debugging this issue?

Detach the RPi at all. Try to connect gate of any mosfet to the source. The leds should go off. If connected to +12, they should go on. Unless I misunderstood your schematics.

Then repeat the same feeding simple HIGH / LOW level from the RPi (not PWM). This will help understanding whether your pins are controlling the leds via mosfets.

Don't forget to switch off pull-ups on pins if you have them.

At first I thought Mosfets used the gate voltage to 'switch' the larger source/drain voltage. So when the output of the GPIO reaches a threshold, the mosfet switches 'on' and the 12V passes from source to drain.

TRUE. (Actually the voltage does not pass, it is the current which passes.)

Is the Mosfet taking the gate voltage and amplifying the 3.5V to 12V proportionally? So 1.75V output (a value of 127) would produce 6V, and thus that channel would be 'half' brightness? (If it worked!)

pigs p command controls a PWM output. You should check if your outputs are properly configured as PWM (I'm not familiar with Raspberries). When you control the PWM duty cycle changing it from 0 to 255 (== 0% to 100%) you control the time your color channel should be lit. If your PWM frequency is 50kHz (period of 20us) and your duty cylce is 64 (about 25%) the channel should be lit for 25%*20us = 5us and OFF for the rest 15us. This way a LED strip is dimmed. So far - so good.

The other thing to consider is driving your MOSFET. I think there is your problem. On high frequency PWM a high current gate driver should be used to drive the MOSFET properly. It's because of its input capacitance (and reverse transfer cap. as well).

First try to set up the Raspeberry for a lower PWM frequency. Anything over 100Hz is OK for eye visible light flickering and over 18-20kHz will not produce a sound that human can hear. Then you could get some MOSFET current drivers for at least 1.5A and connect them between the Pi and each MOSFET's gate.

An oscilloscope would be in a great help here. ;)

Not the answer you're looking for? Browse other questions tagged raspberry-pi npn led-strip or ask your own question.

2
Raspberry Pi + IRFZ44N to control a 5050 RGB LED strip: current seems to be limited
1
Mosfet behaving differently with other power supply and same voltage
0
Drive LED strip from single LED
3
Will a LED strip be less bright when I drive my mosfets with 3.3V instead of 5V?
2
raspberry pi 3.3 to 5v level shift for led rgb strip
3
MOSFET does not turn off totally
0
Using one Mosfet to control the gate pin of another Mosfet
2
Big voltage drop across MOSFET with LED strip load