I am designing a board which will have 5x DRAM DDR3L Micron MT41K512M8DA-107XIT:P (\$V_{DDQ}=1.35V\$). The question is, how to estimate the peak current consumption of the DRAM and then design a power supply?

However, this is just an avarage current measured over time as the DRAM Refresh command is executed repeatedly. I need the peak current to design my PSU. I checked Micron document TN-41-01 "Calculating Memory System Power for DDR3". It discusses just average power consumption, not peaks. It shows some example graphs with averages and peaks; for an example see below - the blue line is average given in datasheet, the green is the real current profile, but no actual values are given. It seems peak currents are manufacturer's secrets... 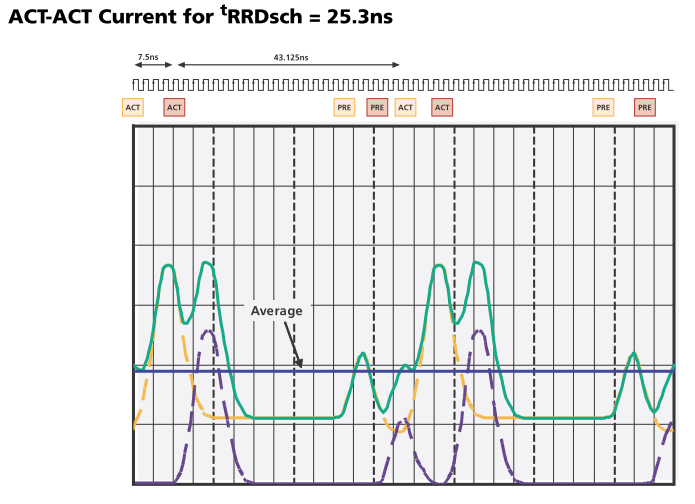 Who has an experience with power supplies for DDR3L? What other pitfalls are there? I already know about VTT and VREF requirements; for that we could use TPS51206 if needed. But for the \$V_{DDQ}\$ supply I hesitate between TPS51916 (a complete DDR supply), and a general TPS54620 that we plan to use for other supplies.

If you take another look at your image of the peaks, and specifically at the time scales listed there, you will see that the peak profiles happen in the range of something like 2.5 to 15ns.

Which makes sense, as DDR3 works at extreme speeds, at least when compared to power frequencies.

You are not going to be designing any supply system that will actively regulate in the domain of nano seconds. Nor will you get the peak currents all the way from your supply into the chips across a PCB trace.

You then design your supply to be compatible with the average current as you would design any other power supply for which you know power consumption.

Not the answer you're looking for? Browse other questions tagged power-supply ddr3 dram or ask your own question.

2
How much current would you design for the various supplies required for Spartan 6 LX9 devices?
0
Current limited fast PWM power Supply
2
LED power supply design / lay-out
0
How to calculate power draw per rail, to see if Power Supply can handle the load?
0
Confusion on dimensioning power supply and fuse for a motor
0
Two 240-12 V wall warts in parallel through LM2596 buck regulator to increase available current
0
Selecting a power supply for a device with 625A 1ms peak current
3
Power supply and circuit breaker for a bursty device
4
Power supply add-on to sink current
0
What components of a DRAM (specifically LPDDR) memory do the power rails VDD1, VDD2 and VDDQ supply the power to?