Confusion about value of output voltage 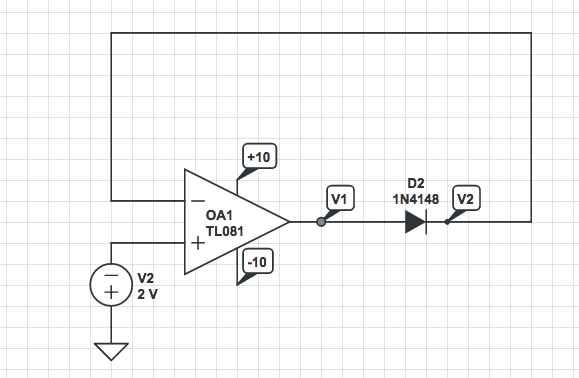 Here in this problem answer of V2 is 0 volt, but i am getting -2 V as answer because i think that -2 at non-inverting terminal will be reflect as -2 V at inverting terminal.... Is my understanding wrong?

operational-amplifier circuit-analysis
Share
Improve this question
asked May 25 '17 at 14:39

Your understanding is correct. If the non-inverting input has -2 volts on it then, due to op-amp negative feedback, the inverting input will also have -2 volts on it. Of course the 1N4148 has leakage and this will bleed a bit of current through to make the -2 volts at the inverting input. I suspect that a better design would have a 1 kohm (or 10 kohm etc.) load resistor from the cathode of D2 to 0 volts. If this were implemented then you would see 0 volts at the output (within a few microvolts for a perfect op-amp).

If the non-inverting input were positive then the inverting input would follow that positive signal. It looks like this circuit is intended to be a precision rectifier or part of some sample and hold circuit.

You need to remember that in reality a diode is simply a non-linear resistor. We normally think of them as being in a conductive or non-conductive state, but in reality they either present a low or high impedance depending on the voltage across them. 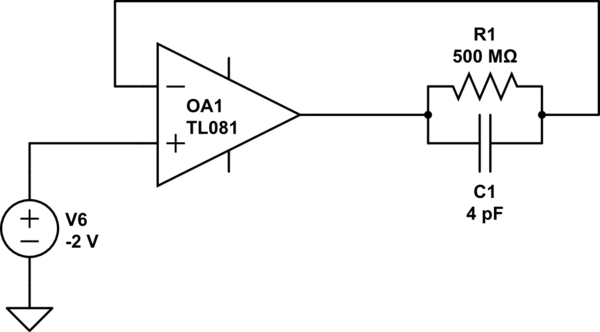 The above is a model of a 1N4148 diode in the non-conducting state. Note the diode also has a small amount of capacitance which reduces the devices impedance for non DC signals. As you can imagine, in isolation like that, the output voltage will follow the input voltage on the Plus pin of the op-amp regardless of polarity. The circuit would however, be incredibly sensitive to noise since the feedback loop is almost floating.

In order for your circuit to work correctly, you would need to add a pull-down resistor as shown below. The resistor effectively provides enough back-current to swamp the back biased diode's resistance and keep the output close to zero volts. Note I said close, it will never be actually zero, since there will always be that resistor divider effect to the output of the op-amp. The smaller the resistor, the closer it will be.

NOTE1: When a negative voltage is being applied to the above circuit, the output of the op-amp will be saturated at the negative rail. That saturation will have an effect on the response timing of this circuit. This circuit is therefore not recommended for high frequency bipolar signals. Also, with some devices, driving to the rail can cause the op-amp to "lock-up".

NOTE2: Since circuits like this seldom work in isolation, the pull-down may actually be provided by intrinsic resistance to ground of whatever this circuit is driving.

A great deal depends on exactly how ideal your op amp and diode are. I assume that the part numbers on your circuit are simply default values inserted from the schematic entry tool, and do not appear on the original problem.

This is clearly wrong. If the output is zero, the diode is forward-biased, and its equivalent resistance is zero (regardless of current flow), so the - input will be 0, rather than -2.

However, if the op amp (being ideal) has infinite gain and infinite input impedance and zero bias currents, then the output can be any voltage of -2 or less, and still satisfy the equations regarding the amplifier. After all, -2 divided by infinity (the gain) is equal to zero, but so is -5 or -10.

1
A questions about negative resistance?
0
Confused how to derive output voltage from Op Amp and RC circuit
0
Simple OpAmp Question
1
Calculating voltage at non-inverting input of the op-amp
0
High resistance op amp
13
What is wrong about this application of Kirchhoffs Current Law?
0
LM324 output voltage problem
1
Voltage Follower - OPAMP
2
Why doesn't the negative feedback current in an op-amp inverting amplifier drive the op amp into saturation?
0
Opmap Based Linear regulator