I'm very new to audio circuits but for the sake of curiosity I want to simulate an approximate version of a circuit of an audio input along with a smartphone pre-amp stage in LTspice. I will have five short questions here since they are all related. But before I want to explain where I am at the moment.

I read some articles and questions including this site and found the following nice pre-amplifier: 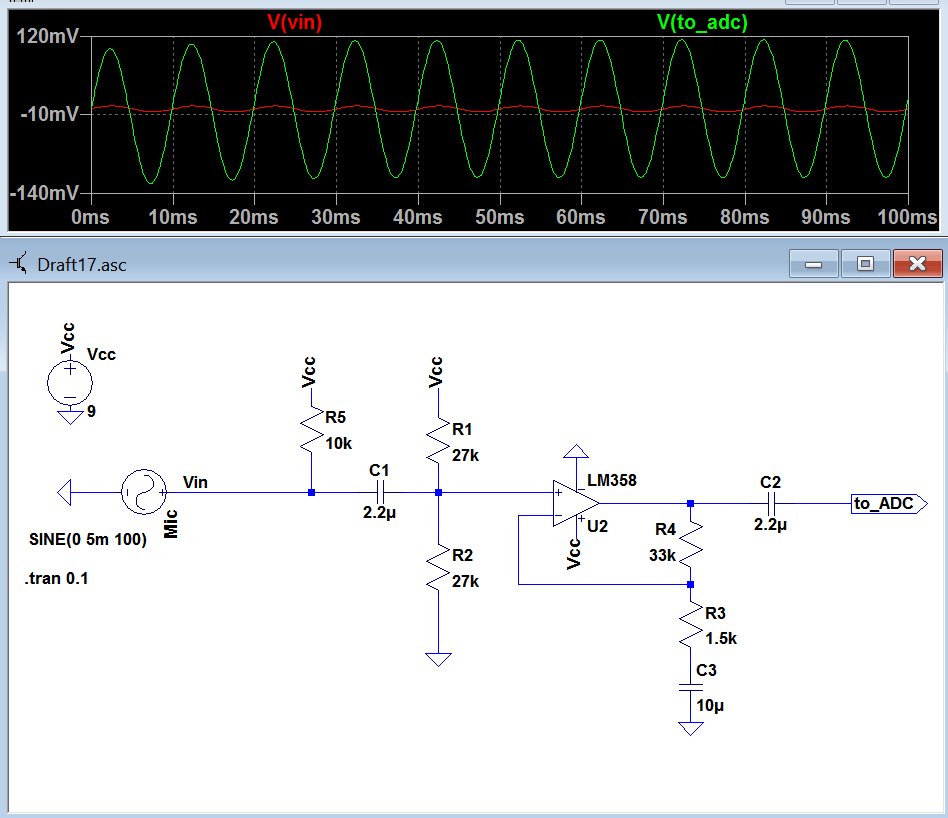 Regarding the above topology and from some readings if I'm not wrong I came to the following conclusions:

-The audio port is AC coupled(DC will get blocked and one cannot directly measure DC voltage) and bandwidth is set for the frequency range of a human ear 20Hz to 20kHz.

-The audio signals are in mV levels. If one will apply voltage signal to the mic input it is better to use a diode to limit the input signal to the audio port.

-To use with a single supply the signal is level shifted by a constant bias voltage. In the above schematic R1 and R2 sets that bias, so the audio voltage oscillates/vibrates around that reference DC voltage.

Now after these basic information and following the above pre-amp topology, I want to draw an approximate circuit for a smartphone preamplifier.

So imagine the following are given:

-The input impedance of the mic input of the smartphone is 1k.

-The DC blocking capacitor is set for a cut off freq.: 20Hz.

This is my attempt to model an approximate pre-amp: 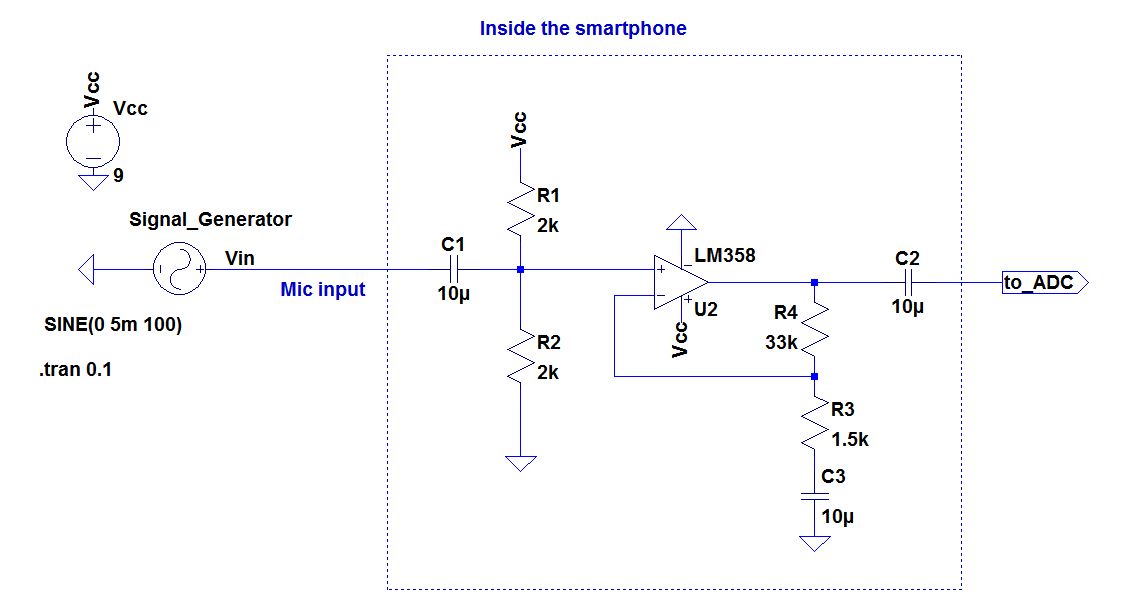 This time instead of a elect mic a mV level signal is applied direct to the mic input. Imagine the output impedance of the signal generator is zero.

1-) In this case I removed R5 of the previous circuit. I dont know what is the purpose of that(?).

4-) The output to the ADC is still swinging from positive to negative. But isn't it still problem for a single supply system? How will ADC take care of negative voltages?

5-) Some smartphone applications show the dB level of the mic audio input. How do they calculate that in relation to the input mV level voltage signal. Lets say the input is 10mV peak to peak. How is that converted to dB in audio engineering? Whats the reference?

Edit: Regarding the second question:

Imagine I have a 1V amplitude i.e. 2V pk-pk 500Hz sinusoidal signal. And my aim is to replicate/scale it as a 500Hz 20mV pk-pk i.e. 10mV sinusoidal audio signal and send upon the bias point input of the pre-amp.

So if I was naive I would think I need a 99k 1k voltage divider as follows: 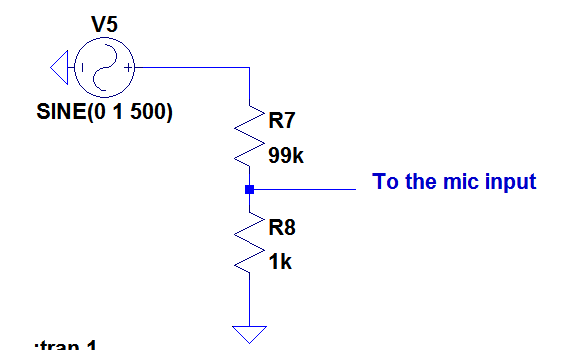 And when plugged in it would look like this: 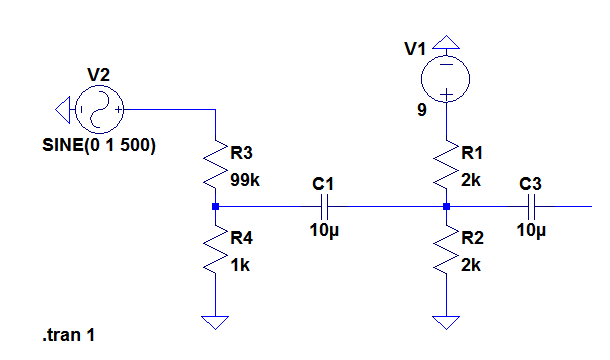 But as I figured out following the answers, now the input impedance will be:

What is the new input impedance here?

*This wouldn't affect things if I only send binary input to the mic. But if it were any signal wouldn't this affect the filter's cut off freq. besides the attenuation? Does that mean the output impedance of the audio signal generator should be zero. Should one use a buffer for that? 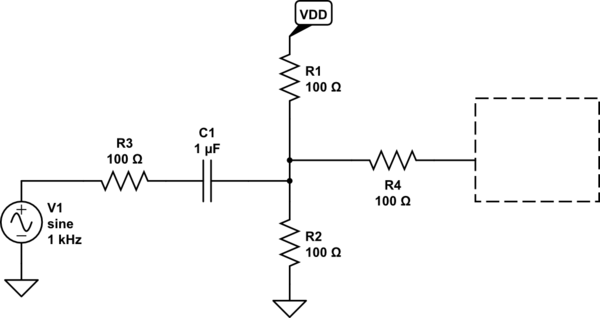 1-) In this case I removed R5 of the previous circuit. I dont know what is the purpose of that(?).

R5 was there to bias the electret microphone. As you had it drawn in your simulation it played no role since the output impedance of your signal source is zero.

The way this affects the signal generator is by the effect of loading. For example, suppose that your signal generator had a 1k output resistance. Looking into the pre-amp it would also see 1k. Thus, the signal delivered would be halved. You generally want to ensure that the input impedance looking into the pre-amp is "much much larger" than the output impedance of your signal source. A good rule of thumb might be ~at least 10k bigger.

You'd generally choose this to be maybe 10x less than your desired lower cutoff point. It is important to aim a bit lower than your desired lower cutoff frequency because there are other low-frequency roll-offs in the circuit as well. For example C3 causes a low frequency roll off. In the limit at DC its like an open-circuit and the amp becomes like a unity gain follower. So to avoid these two ""poles"" having an effect which adds together, at least one of them should be made much less than the desired roll-off.

4-) The output to the ADC is still swinging from positive to negative. But isn't it still problem for a single supply system? How will ADC take care of negative voltages?

Impossible to say without having more information about the ADC.

5-) Some smartphone applications show the dB level of the mic audio input. How do they calculate that in relation to the input mV level voltage signal. Lets say the input is 10mV peak to peak. How is that converted to dB in audio engineering? Whats the reference?

I'm not familiar with these applications, post an example maybe.

Not the answer you're looking for? Browse other questions tagged audio preamp or ask your own question.

4
line-level audio into an iPhone headset jack?
1
When multiplexing audio do I need a pre-amplifier for each channel?
1
Audio hack: replacing electret mic with phone audio output
1
Confusion about TRRS jack and mic input
0
A question about impedance on a multiplexer
0
Impedance matching between CSR8675 and a MM20 microphone
2
Pre-amplifier input protection
1
How can I make a L+R+mic audio dongle to record an Android phone's own output?