Phase shift of voltage across capacitor in series RC

Here's a simple RC circuit from an AC analysis book: 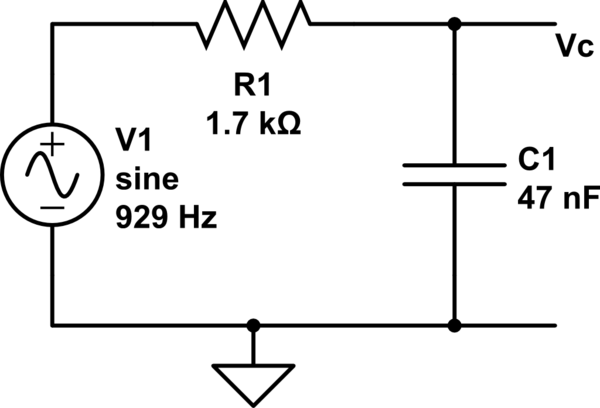 I'm trying to determine the phase shift produced by C1 relative to that of V1 given only frequency and impedance. In the book it says that the answer is -25 degrees. Does the negative sign mean that the current lags the source voltage, contrary to the fact that capacitances cause a leading phase shift?

EDIT: Or, does the negative sign signify that it's referring to the actual phase shift minus 90 degrees? Using the tangent relationship between the capacitive reactance and resistance, I keep getting 65 degrees for an answer.

In the book it says that the answer is -25 degrees

Using the tangent relationship between the capacitive reactance and resistance, I keep getting 65 degrees for an answer.

One way to interpret is the one which you have stated that the waveform is leading. The other way is the one which your calculator is not allowing you to understand, usually in some calculators this issue occurs that if the phase angle goes more than 180 degrees, they just convert it into a negative number. If you add 180+25 degrees to the current phase angle you will see what the actual phase angle is which would be 205 degrees and then you will get what you expect, that is a lagging voltage across the capacitor.

Now... why add 180+(magnitude of the number)? In my calculus class when complex numbers were being taught we used to draw the real and imaginary axis, taking the imaginary part to be negative and real part to be positive that is the vector (in the circuits case which is a phasor) lies in the third quadrant, now if something lies in the third quadrant you can be sure that the angle will be greater than 180 degrees, what the calculator does is it takes the angle from the negative x-axis rather than the positive one and since it does that and is still going counter clockwise, we get the negative sign, so we add 180 to get the angle from the positive x or real axis, which is usually from where it is measured .

Speaking in terms of circuits what happens is, getting -25 degrees does not mean that the voltage has started to lead the entire input, it means that it lags it by 205 degrees, but 205 degrees is such a big lagging (usually anything above 180 degrees is) that we just say that it sort of looks like it is leading, which is actually what is done when we see something having a phase shift of greater than 180 degrees because the waveforms just give a better feel the other way around ie leading instead of lagging because the waveform of the output looks to be coming before the input one. .

Not the answer you're looking for? Browse other questions tagged ac phase-shift or ask your own question.