Can anyone provide a reference design for a 434 MHz PCB Trace Antenna? Is it just a matter of creating a snake trace pattern about 17cm long and slapping a ground plane under it (with a trace thickness for say 50 ohms characteristic impedance to the ground plane given the PCB thickness)?

The context is that I think I'm heading toward using a trace antenna with the RFM12B transceiver module en route to passing regulatory standards. I've been told that embedding the antenna in the PCB is an easier / lower cost path to certification than allowing for a whip (or other externally connected) antenna. Any advice or pointers would be most appreciated!

Tye following may be useful. Most are 2.4 GHz focused but should provide some useful ideas.

A few zillion PCB antennas - all images linked to webpages

Inverted F design - 2.4 GHz but significant relevance
title: "Analysis and Design of an Inverted F Antenna Printed on a PCMCIA Card for the 2.4 GHz ISM band.pdf"

NO PCB antennas here BUT many432 MHz antennas 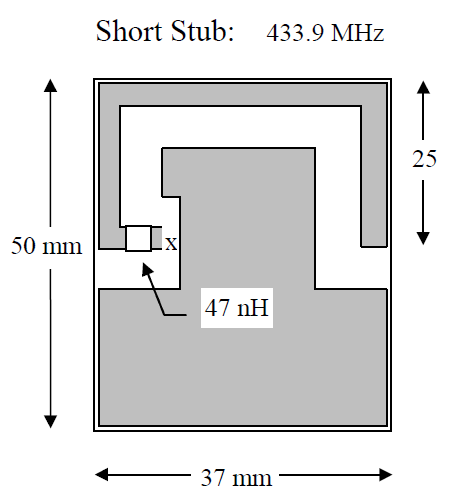 Not the answer you're looking for? Browse other questions tagged rf antenna fcc pcb-antenna or ask your own question.

3
Using a 434MHz PCB Trace Antenna
14
Need help with selecting an antenna for PCB
6
Consensus on microstrip trace impedance calculations?
6
PCB Antenna Design
0
434MHz Small loop printed antenna design
1
Distance an inverted F antenna should be from the bottom and side edges of a PCB?
0
On a PCB, can an antenna for 433MHz RF be "far" from the transceiver?
0
RF trace matching network component pad sizes
0
Bluetooth antenna on top of large metal object and other RF questions