ways to control resistance by microcontroller

Q. I have a (fuel) gauge that accepts a configurable resistance range (0-500 ohm, two-wire, one to ground), which I want to control with an micro controller (Arduino Pro Mini or Nano with an Atmel 328P).

I think the gauge is designed to be controlled by a rheostat, as it requires a linear resistance range, correct me if my assumption is wrong).

What would be my options? Could it somehow be done using the Arduino's analog output? When researching, I've come across Digi-Pots, DACs and JFETs. But the application was never the same as what I'm doing, often using PWM and more geared towards voltages then to resistance...

Update; output not as expected:

I'm measuring a constant ~19kOhm on the circuit output (multi meter between "output"-wire and ground). I would expect it to vary as the PWM duty cycle changes.

I've attached a photo of my breadboard layout. My phone doesn't have a great camera, so i've added the names of the components. What's not clear on the photo is that both the 10k resistor coming from the LM and pin 3 of the Mosfet are on the same row 10, the tiny 10pF resistor is on rows 10 and 11. I think I've copied the schematic pretty accurate. I did not have some exact resistor values, so I've used close ones, which I think should be good enough to see output.

I'm not just chucking my problem over the fence, but any pointers would be welcome, I'm still only a few months into this stuff. :) Thanks! 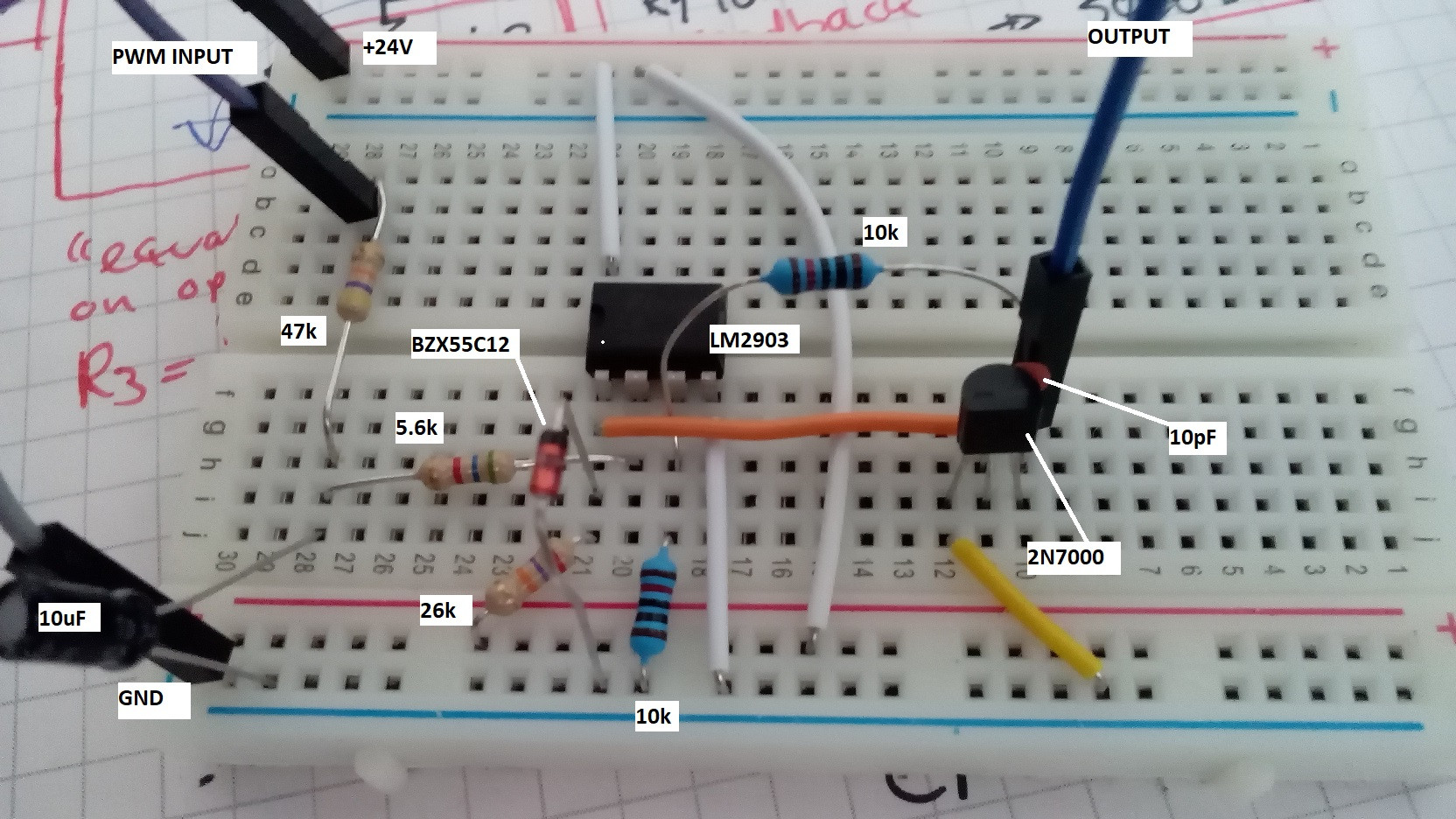 You could go the hard way and make a variable resistor, but you could also use an open collector opamp and make voltage feedback. You could use your Arduino analog output which as far as I know is actually a PWM output, to control this circuit. In your MCU firmware you can map PWM to %fuel to get better accuracy.

Update: Inputs of LM393 are pretty good at voltages near 0, but its output will saturate to 100-200mV, (max 700mV at the widest temperature range) so you will get less accuracy near zero. If application is automotive you could use Lm2903 wide temp. version or better NCV2903 - automotive version.

Update 2: The || symbol is a short form to represent equivalen parallel resistance.

$$ R3 = R1||R2 = \frac{R1.R2}{R1+R2}$$ Each OpAmp has some (small) input bias current. If the resistance on both inputs as seen by the OpAmp is not equal this will produce some voltage error on OpAmp's output. The calculated value should be 5k in this case, but using the nearest standard value 5.1k is acceptable.

One more thing - if the maximum current is 18-19mA it may be too high for LM393/LM2903's output. You can extend output current capability using a small signal MOSFET this way:

R5 acts as a pull-up resistor for OpAmp's open collector output. If you use another OpAmp with full output you may omit this resistor but be sure the OpAmp can drive its output down to 1V with respect to ground (-Vss). C2 limits the transistor's AC gain, you could experiment it's value to get maximum stability. R1 is connected to transistor's drain to close the DC feedback loop from the circuit's output. Zener diode D1 (12V) limits the maximum voltage applied on MOSFET's gate. Because M1 inverts the polarity of the signal OA1's inputs should be inverted compared to previous schematic!