I'm working on a circuit involving Silicon Photomultipliers. Two SiPMs are in parallel together, and they go to a feedback amplifier circuit where the current signal gets filtered and converted into a voltage signal as shown below:

Our first design used only one SiPM in the circuit, so we decided to try and see the effects of two SiPMs in parallel together in one amplifier circuit. We decided to go with a design where we have a pair of pads that connect the two SiPMs together, so they can either be connected together in parallel when the pads are shorted, or they can stay on their own individual channel if the pads are not soldered together. For this design, we soldered the pads together so two SiPMs are in parallel together, and we left elements of the unused channel bare, with no parts soldered to it.

One issue that we're seeing is crosstalk. I'm really new in designing boards like this, and I never learned about issues such as this. I never took a design class, so issues such as crosstalk is all brand new to me. The PCB board for the circuit has already been designed, so there's nothing much we can do about the trace length and such. I'll have to keep these design issues in mind for the next board. For now, I was just wondering if there was anything I can do to reduce the crosstalk effects at the output. My first thought was to increase the feedback capacitance from 3 pF to a higher value, say around 6-12 pF. The initial circuit with one SiPM utilized 3 pF capacitance, and there were no issues with it. That was the recommended circuit values provided by SensL. Putting two SiPMs in parallel increases the amount of noise at the input thanks to parasitic capacitance, so I thought that by increasing the capacitance, it would compensate for it, and since it is still in the pF range, the RC time constant is still tiny in the nanosecond range, so the rise time shouldn't be affected very much up to a certain value. Does this sound correct, or are there other ways to reduce the crosstalk?

EDIT: I apologize for being vague in explaining crosstalk. Please let me elaborate a bit more. First off, the PCB board that we are working with contains four SiPMs, each on their own individual channel, and there a set of pads at the cathode of two pairs of SiPMs to put them in parallel if desired. You can see that in the schematic below. Our current design with two SiPMs in parallel per channel is shown. Our issue is that we used an LED pulser to 'activate' our SiPMs, and we examined output from the two different channels. One channel was being pulsed, while the other channel was being left alone. You can see it in the picture below, with the pulse in purple, the pulsed channel in green, and the non-pulsed channel in blue. The pulsed channel shows a positive peak which is what we expect, but we noticed a negative pulse in the unpulsed channel, which we believe to be is crosstalk. Again, this is all occurring on the same PCB board. 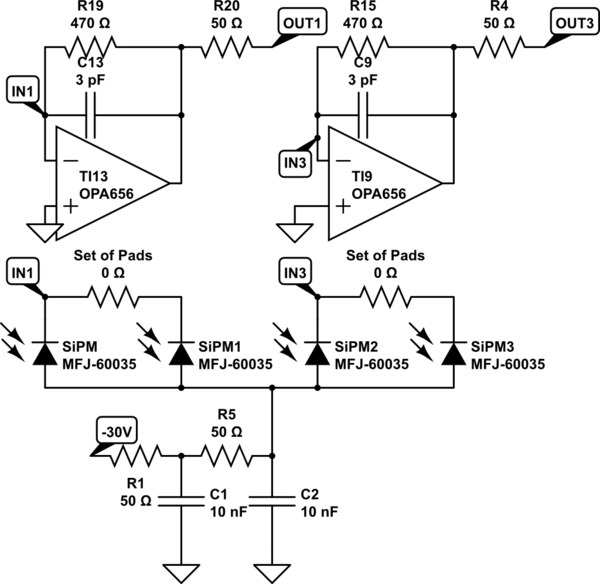 Assuming your crosstalk is Efield, you have MANY methods to reduce crosstalk.

Any bit of grounded metal, sticking out above the PCB, will capture some flux lines and reduce crosstalk.

Any nearby component (especially if Grounded, like BypassCaps) reduce crosstalk.

Notice the Victim is behind 2 GROUNDED shield plates, but Efield simply goes above and around and behind and then zaps down to the victim.

Theory tells us this pattern IS LEGITIMATE SOLUTION to the Efields, because in a grid of resistors, with 4 regions (TX driven, RX to monitor what is induced, and 2 shields tied to GND to collect Efield flux) of metal in the SPICE SIM grid of resistors, current WILL go behind the shields. Run this in SPICE, and see. 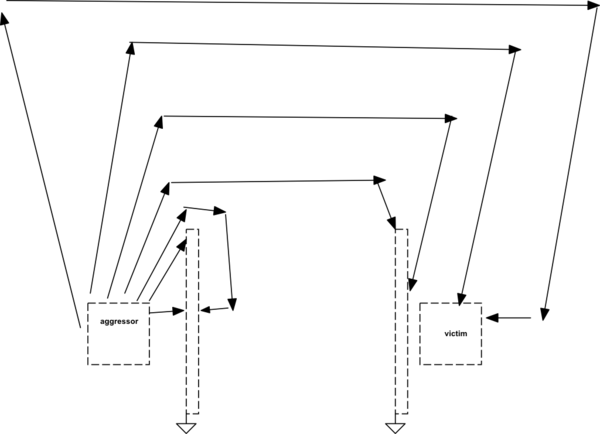 Not the answer you're looking for? Browse other questions tagged amplifier crosstalk photometry or ask your own question.