General circuit debugging techniques, and my 555 timer in particular

I am looking for help in two ways:

The circuit is a timer that runs for about an hour, then stops. (See below for component values and a mod to make it stop after an hour.) A breadboard version of the circuit works fine, but for a version on a prototype PCB, the LED stays on, does not flash.

When I turn the power on (switch is before power transformer), the LED turns on and stays on indefinitely. I expected it to flash at around 1.7 second intervals. When I turn off the power, the light begins to flash at approximately the desired rate, and does so twice before the power supply filter capacitor is drained.

I don't have a good strategy for debugging, so I guessed. I want to build expertise in debugging circuits in general and this circuit in particular.

I do have a Rigol digital oscilloscope but using it is new to me. The only place I think it would be of use in this circuit is watching the timer capacitor charge, but I can see that with the DVM. Are there other ways it might help me debug the circuit?

For the 555, the 1N914 diode and Rd (10k) are intended to drain the timing capacitor on power off, so that turning power off then on will result in more accurate timing. This is a hint from an earlier post, but the comments did not specify the kind of diode to use, or the resistance for Rd. I have a lot of 1N914's around, and they appear to have adequate voltage and current for this purpose, and are cheaper than a 1N4001 (I don't have many). For Rd, I wanted a low enough resistance to mostly drain the capacitor quickly, but not so low as to consume too much current. 10K with Vcc=12v means a bit over 1mA ambient current.

When this circuit is complete, I want it to have the 4017 count from Q0 to Q9, and stop on Q9. My solution (tested on breadboard, works) is to disconnect 555 pin 4 from Vcc, and connect it to Q9 output of 4017 through an inverting 4001 gate, so that when Q9 goes high, pin 4 of 555 goes low, and no more pulses. I don't know if there is a better solution, but this seems to work on the breadboard. For the PCB, pin 4 is temporarily connected to Vcc for testing, so it should always pulse. 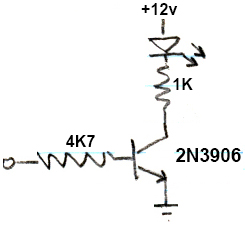 To be complete, the circuit above is the simple driver I am using for the LED. In the final circuit, there will be two of them, one each for the Red and Green LEDs of an RGB LED. I tested these separately from the 555 circuit and they work. There is also be a relay driver for the final circuit, and it works too, though it is not connected yet.

I bought an inexpensive power transformer at an electronics shop in Korat, Thailand. It is rated 220vac primary, 24-0-24v 100mA secondary, and I am using it in US, with 120vac mains. I think this should be enough current capacity, but I do have a similar transformer with 300mA secondary if it is not. The full-wave rectifier, filter capacitor, and LM7812 regulator makes a fairly standard circuit.

In searching for solutions, I found that the 4060 could be used in place of a 555 and 4017. But since I have started building the version at the top, I would prefer to make it work rather than starting over.

Since your meter sees about 15 volts at the input of the 7812, I suspect that the 2200uF capacitor is not connected, and one of the diodes may not be connected either, giving you half-wave pulsating DC.

Not the answer you're looking for? Browse other questions tagged 555 debugging or ask your own question.

4
How can I debug my 555 timer circuit?
0
555 timer ciruit errors
1
Identifying the "Preset" Component in this 555 Monostable Timer PCB
2
555 Timer in Bistable Mode - Unexpected Behavior When Removing Power
5
555 timer circuit power consumption
0
Is there anything wrong with this particular timer circuit utilizing 555?
2
Appliance countdown timer using current transformer and 555 timers