Triggering buttons with a diode

total newbie here. I was reading this post:
http://dduino.blogspot.com/2012/02/trigger-buttons-with-arduino.html

It is basically trying to trigger a button in an IC from an arduino(green) pin. 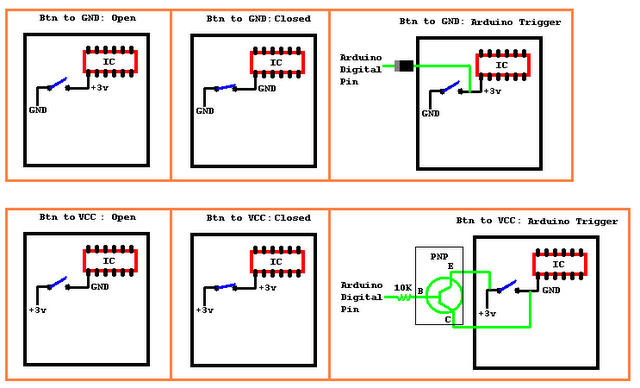 Now, I think that the arduino pin is connecting the diode to a pin as an Output Low( 0V? GND?) and that triggers the IC pin to GND so that the action gets taken. To switch it off it sets the arduino pin to Input and it just works? How?

Will this work if the IC and the arduino are connected to different power sources?

The blogpost doesn't say what the IC is, but if it's a CMOS IC (a logic IC or a microcontroller) the pin needs a pull-up resistor. 100k\$\Omega\$ is a good value. If you don't place the resistor the input will be undefined when the switch is open. The resistor will make the input high.

The emitter-base junction is actually a diode, and has the same voltage drop as a common diode at low currents, about 0.7V. So the base will be at 2.3V (3V - 0.7V). If you would connect the Arduino without the resistor and make its output low you have a problem. You would directly connect a point at 2.3V with another point at 0V which means a short circuit, and the high current may damage your Arduino and the transistor. By placing a resistor you limit the current. A 2200\$\Omega\$ resistor will limit it to about 1mA (2.3V / 2200\$\Omega\$ = 1mA). So a low output on the Arduino will allow minimum 100mA to flow to the collector. The input impedance of the IC will be very high, however, and the actual current will be limited to a few \$\mu\$A. Nevertheless, that's enough to make the collector's voltage close to the emitter, so near 3V, and the IC's input will be high. Note: just like the other schematic needs a pull-up resistor, this one needs a pull-down resistor to have a defined level when the switch is open.
If the transistor's base is high there won't be any base current, hence no collector current, and the pull-down resistor will pull the IC's input low. Note: I understand the Arduino operates at +5V, then making the output high will make the base 2V higher than the emitter. You normally don't want to do that, because the emitter-base junction can only survive a small reverse voltage. 2V will still be acceptable, though.

The reason you need the diode: If you would directly connect the IC to the Arduino with the Arduino's output high, closing the switch would short-circuit the output to ground.

The first method is more subtle. The switch has two states:

Now, you could just connect the Arduino directly to the IC pin. The Arduino output has two states:

The diode prevents this by changing the effect the Arduino has on the IC pin. Now you have:

If the button is pressed at the same time as the Arduino's pin is high, then the high short circuit current is blocked by the diode, and all is safe.

Not the answer you're looking for? Browse other questions tagged arduino integrated-circuit diodes button or ask your own question.

1
simulate pin as connect nowhere
4
Will I need diode if I add button to this schematic?
1
Close/open a physical button circuit via Arduino
3
MCU push button triggered by electrostatic discharges
0
Arduino power on button problem
0
Momentary Push Button Toggling Pairs
0
Matrix of SPST switches and buttons with Arduino
0
I want to discharge a capacitor with an Arduino digital pin. Which of these two circuits is safer for the board?
6
Motorized valve interfering with button?