Problems with efficiency and heat in a rectifier

I have too much heat in a rectifier so there is a considerable efficiency loss. I've been searching about it and I've found it could be because forward voltage or even because high frequency AC input.

My question is if 1700Hz could be responsible of considerable losses for this normal kind of rectifier.

I see that it will be too much current for this rectifier so I am using far from the full power in the generator and still heats too much. I want to find another rectifier or even buy 6 diodes, and I don't know if in my case I must search for fast diodes or directly for bridge rectifiers. If the most important will be lower forward voltage or if fast recovery is needed also. This diode could be enough?: VS-150EBU02

Thanks in advance for any kind of help

The reverse recovery of your diodes does influence the power dissipation in your application, but in this case is extremely unlikely to be the major cause of power/efficiency loss. You could start by comparing a fast rectifier to you current rectifier. The VUO52-16NO1 and a much faster VUE130-12NO7 are a good comparison.

While you gain lower switching losses in the VUE130- the power loss is actually dominated by the difference in Vf in your application (which I assume is a car type alternator). The VUO52- has a Vf of only 1.4 V for a total bridge loss of about 160 W at 60 A, and the VUE130- has a Vf of 2.7 V for a total loss of about 320 W at 60 A. The reverse recovery losses for the VUO52- is unlikely to be more than about 16 W. Because you have a large output filter capacitor the diodes go into reverse recovery just after the peak of each phase voltage, but If has already dropped to close to zero dropping the stored charge considerably. Yes, there will be a reverse current flow, but insignificant compared to If max. This might be worthwhile reading for you.

You could use fast and low Vf Schottky diodes to reduce the voltage losses. For example the APT60S20B or the VS-100BGQ100 (more appropriate because it can be screwed down) would more than half your power loss.

The best way to reduce both switching and forward power loss would be to use a half or full synchronous rectifier of course. More complex electronics, but power losses in the rectifier can be reduced to just a few watts with fully synchronous.

If you look up SMART rectifier controls (such as this) you will see ways to use FETs as ideal rectifiers. There are lots of these controllers but be careful that you understand that some of these devices only operate at low frequencies, so may not be suitable.

One simple way to implement synchronous rectification is to sense the current in the lower diode of each pair and use a FET on the upper diode. This is simple and reduces your power loss in half. You could implement this with the 3 phase rectifier you already have.

Then you can get creative and build your own microprocessor solution. However if you aren't at that level you could consider using an open source ESC controller as a synchronous rectifier ....here is a demo of that on YouTube. Here the user is simply using the ESC32 as-is, but you could make it automatically track speed by altering the firmware. Again, depends on you capabilities.

Absolutely, if you look at a standard 1N400x diode it has a reverse recovery time of 30 us - this means that when the diode goes from forward conduction to supposedly reverse blocking, it actually takes 30 us: - 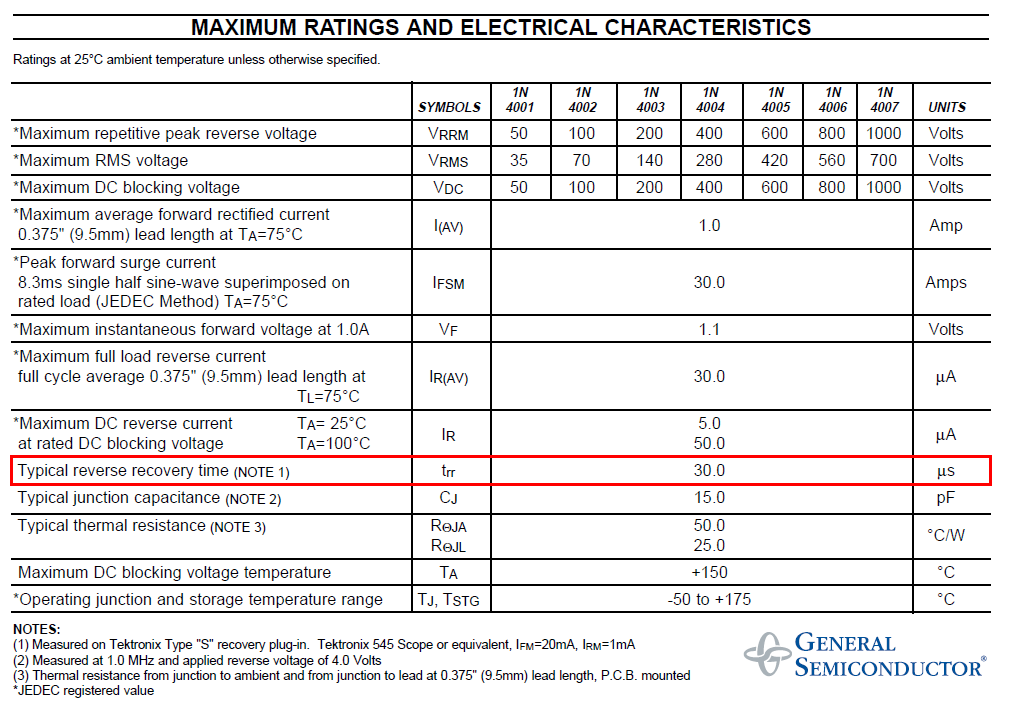 Some 1N400x manufacturers are better than others of course and some data sheets don't even specify it.

So, it's acting as a short for 30 us every half-cycle of the power frequency. Given that 1700 Hz has a cycle time of 588 us, a 1N400x rectifier would be wanting to short the supply (straight after the zero crossing point) for 10% of the half-cycle time. So, 10% of 180 degrees is 18 degrees and your sin wave will have reached 30.9 % of its peak negative voltage value and of course, the diode will still be trying to short out that supply.

Not the answer you're looking for? Browse other questions tagged diodes rectifier efficiency or ask your own question.

1
Basic electronic: frequency in power supplies, and feeding 400Hz to a 50Hz device