Update: The ATmega came bootloaded with the arduino software is that can simplify anything

I have this board: 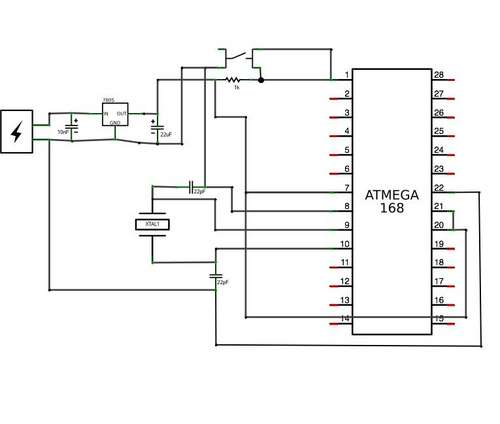 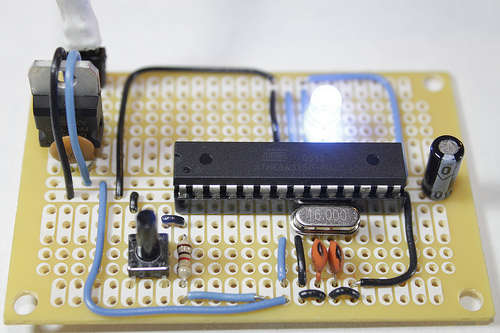 I'm looking for a bone-simple way to upload sketches.

Ideally without buying additional components... Double points if you've got a http://fritzing.org/ diagram!

I'd recommend buying an AVRTinyISP from adafruit. This little kit has been very useful for me. It allows you to very easily program just about any AVR chip you'll run across and easily works from avrdude. I bought one and have used it for everything from attiny45s to atmega328s

If your chip does not have a bootloader then you can either burn the bootloader onto it or just program it like a regular old AVR chip with an ISP header.

And the corresponding pinout on the chip

A USB to TTL-serial cable, such as this one, a bootloader in your chip, and AVR-dude (the uploader part of the Arduino IDE; if you're using the IDE, the cable's all you need). If your chip doesn't have a bootloader in it already you'll have to get it in there another way. The easiest way is to replace the with a pre-programmed one. The first one I found is the 168's pin-compatible big brother, the 328, at Adafruit Industries. 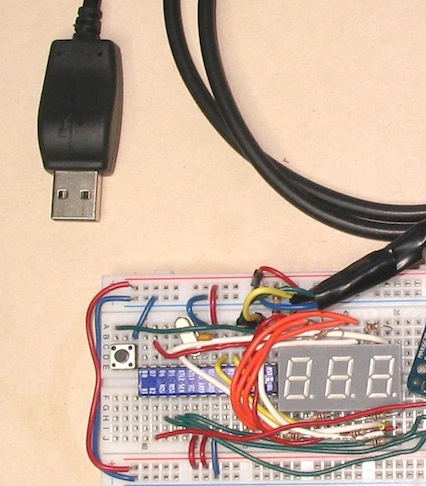 Your board, in its current form, is not ready for that yet. If you want to deploy sketches directly from the Arduino IDE to your custom board, then it must have at a minimum:

The arduino bootloader is a program that is loaded on to the board from the factory. It is the one that is responsible for accepting new programs ("sketches") from the IDE over serial communication with the PC and writes the program to a particular location on the chip where it will then run that application.

So how did the bootloader get there in the first place? It's written there using a tool called an ISP programmer. There are plenty of them out there to choose from but they all do the same thing: they follow a protocol to put the chip into a programming mode and then writes directly to its flash memory. If you want to get the arduino bootloader on to your blank AVR then you'll have to do this and also get familiar with a command line tool called avr-dude. As others have pointed out, you can actually make your own ISP programmer from an existing arduino because all you need it to do is follow that programming protocol - which is well documented and can be implemented by writing your own sketch to do that.

Since you don't want to buy any more external hardware, perhaps the best way is to buy an AVR chip with the arduino bootloader already loaded on to it as another answer suggested. This still leaves point #2 - you'll need to find a way to hook up your PC to your board. There's no getting around the fact that you'll need some kind of cable or IC or combination of both to get that done.

Not the answer you're looking for? Browse other questions tagged arduino atmega programming or ask your own question.

9
How can I fix an AVRdude not-in-sync error when programming Arduino via USB-to-serial cable?
0
Blinking LED on ATMEGA168. Error rc=-1. AVRDUDE

2
Arduino BT upload problem
1
What kind of resistors do I need to use in this Canon remote switch, if it is possible at all with the P2N2222A transistor I have?
1
digitalRead sampling rate for Arduino Uno
3
Change programatically pin number in shield software library?
0
Arduino Board malfunctioning
0
PIC12F675 Programmer using arduino (port from 12bit programmer)
1
Advice on Arduino project for smart light bulb planning