The following circuit shows a CD4060 in a timer circuit, intended to hold a relay (with a transistor driver) on for about an hour, then turn it off. I want to have a reset switch so that at any time, I can push it to start the timing from an hour again. 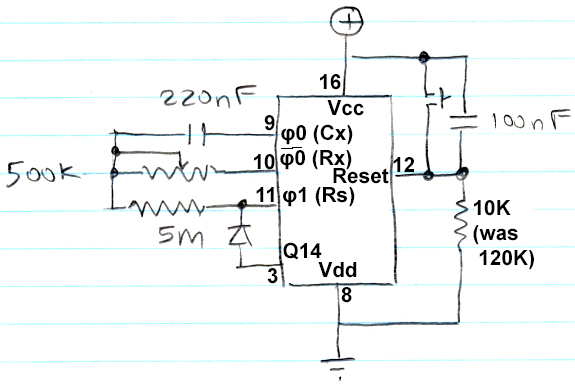 orm. It shows mostly the power and inputs. For testing, the outputs are connected to a bank of LEDs with current-limiting resistors, showing every available state (Q4-Q10, Q12-14), but I did not show that in the diagram, for simplicity. It counts correctly. The relay is not in the circuit yet.

ONE output is shown, Q14 at pin 3, with a diode whose purpose is to latch the timer, to stop counting when it reaches Q14, or about one hour. The latching effect works correctly. Q14 is also connected to an LED as described above.

The 120K resistor and the 100nF capacitor are a power-on reset circuit, and that has been working every time I tried. "Trying" means turning of the master power switch (before the power transformer in the power supply) and then turning it on again.

PROBLEM: the only thing that does not work correctly is the manual reset pushbutton across the 100nF capacitor. As I understand it, the 4060 RESET (pin 12) can be connected HI to achieve a reset. However, pushing the button, whether quickly or for a second or two, usually results in a non-zero state for the 4060 registers, typically with Q5-Q9 HI.

Why does the manual reset not clear all registers to zero, and how do I fix it?

UPDATE: in the original post, the resistor from pins 12 to 8 was said to be 1M, but it was 120K. Per suggestions in comments and answer, I changed it to 10K. Reset button works as long as I don't hold it down longer than say 1/2 second. When holding it down, releasing it leaves the registers in a non-zero state.

In general I think your resistor values are far too large.

The leakage current on the reset pin will leave quite a bit of voltage across the 1M resistor which can be an issue. Similarly, the oscillator components are high values which leaves you open to noise in that circuit.

You don't show a bypass capacitor across the power supply. Be sure you have at least 100nF, preferably 1uF ceramic near the chip. And make sure you are not doing anything to disrupt it- if you are having problems now, you will have worse problems when a relay and noisy contact switching enters the scenario.

Just to be clear -the only way to get the sort of effect you describe is by an improper power rail transient.

I don't think your values are a problem, but I would definitely get rid of that RC reset circuit and replace it with something more reliable. If your supply rail is 5V, 3.3V etc. there are plenty of commercial chips that are infinitely better than an RC circuit.

Just out of the box, can you use a cheap microcontroller here?? Because that way, you can have accurate and adjustable time delay from microseconds to years. And you can build any sort of reset/update logic for your timer.

The cheapest STM8 controllers come for less than a dollar.

The RC delay schemes like this one used with 4060 are not much accurate or reproducible for times more than a few seconds.

It's probably VSS (pin 8 labeled Vdd in the diagram) not connected to ground.

The resistor values are obviously sufficient else it would not work at all. however the datasheet calls for RS to be between 2 and 5 times RX so 1M might be a better choice there. (figure 12)

And VDD must be connected because there's no other connection to the positive supply.

That only leaves the VSS connection. with that connection broken the current exits through the reset pin's protection diodes and the 10K resistor. feeble at that current must be a 4060 does not need a lot of current, and is not fussy about the supply voltage and the timing parts are a much higher resistance. But pressing the reset button would now cut the only power supply the chip has - resulting in an incomplete reset.

Not the answer you're looking for? Browse other questions tagged timer reset or ask your own question.