Can you clarify what an 1NO1NC switch is?

I've come across multiple mentions of switches described as 1NO1NC.

They often described as having 2 options: ON/(OFF) and (ON)/OFF and from what I gather they have 3 terminals for wires: a NO terminal, a NC terminal and a C (?) terminal.

Can you explain what these mean?

When would you use an NO or an NC switch? 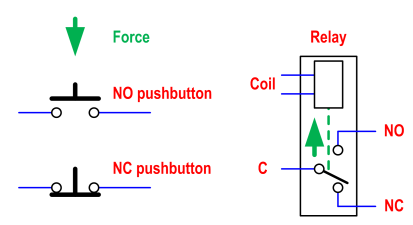 (The drawings show the state in the absence of force.)

The switch you describe with 3 terminals would normally be called SPDT or single pole, double throw.

Generally normally open contacts are used in most electronics especially for momentary contact push buttons- it is more intuitive to work with switches like this.

You will find normally closed contacts in a lot of industrial applications as logic is entirely implemented by switches and contactors. The NC contacts are used on an emergency stop button to interrupt the current holding the contactor coil energised, for example.

These switches are usually of a momentary type rather than latching. "Momentary" means that they're only on while you're pushing them like a key on your keyboard, rather than latching, which means that they stay where you put them like a light switch. This might be a spring-loaded toggle switch, or they might be a pushbutton. It may also be a pair of switches or contactors sharing a single activation lever.

"C" almost certainly stands for "Common", which would be the terminal that is shared between both switches. When the switch body itself has a common terminal, that's usually known as an"SPDT" or "Single-pole Double-Throw" switch. The single pole is the common terminal, and the switch can be "thrown" in either direction.

Here's a simple schematic diagram of a 1NC1NO switch. Imagine that the <--- is a spring pulling the center lever to the left:

In this default setup, the left-side terminal "NC" is closed; it is connected to C1. There is a break in the "NO" switch; it is open or not connected to C2. When actuated, the situation changes:

Now the "NC" terminal is an open, while the "NO" terminal is closed. When released, it will spring back to the left and be in the original configuration.

You could use an individual NC or NO switch in many situations. For example, a reset button is commonly used for a reset circuit: 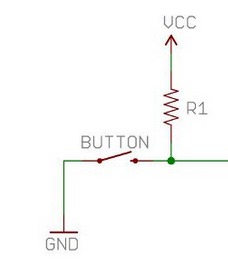 Normally, the resistor R1 keeps the output wire high. When the button is pressed, the line is pulled to ground and the output is low. You could reverse the positions and use an NC button, but that would draw power continuously through the resistor.

One application for a 1NC1NO combination switch is in emergency shut-off devices, like the 'red mushrooms' common on industrial equipment. By using both switch types, the system can go into a shut-down state in most failure modes:

This type of switch is commonly available with the mushroom and each switch available as separate parts, later assembled like this: 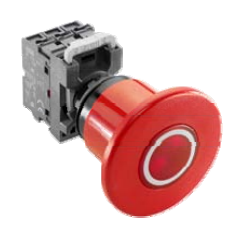 The three units at the back of the switch are individual units with their own actuators.

1
Deciphering Mux/Demux/Switch Nomenclature: AxB:C?
4
Why does grounding my switch cause the fuse to blow?
1
Lighted SPST switch waiting problems
1
Toggle Switch to swap the connections of two buttons
0
How does a momentary dpdt switch function?
1
Simplify switch network for dual-element heater
0
Snubber Network Over a Switch
1
Switch that resets to 'on' after power loss