I've been reading Tanenbaum's Structured Computer Organization and he says one of the major bottlenecks for increasing CPU clock speed is heat. So I started thinking: Is it possible to remove the heatsink altogether and use that heat to generate more electricity? I've been searching on this and found these thermoelectric materials and this thermoelectric generator: 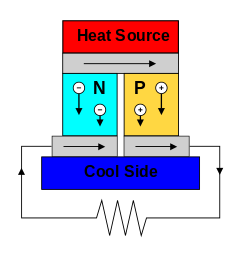 I read on that Wikipedia article that "Silicon-germanium alloys are currently the best thermoelectric materials around 1000 °C (...)", and I know CPU normally operate around 30~40°C. So, getting to 1000 °C would require more CPUs.

So I thought: What about putting a lot of CPUs in parallel without their heatsinks to gather more heat? We can also overclock these CPUs a whole lot and see how much heat they can generate.

But I'm stuck. I don't know what to think next. I don't even know if it's a good line of thought.

My question is: why not develop some sort of heatsink that generates electricity from the CPU's heat? I know somebody must already have thought about that and thought about a reason why not to do it, but I can't figure it out.

So, why is it not possible?

EDIT for clarification: I do not want CPUs to work at 1000 °C. I'll list my reasoning steps (not necessarily correct), which were roughly:

EDIT2: I see that my idea is fundamentally wrong and bad. Thanks for all the answers and comments. Sorry about any misunderstandings.

tl;dr Yes, you can extract a small amount of power from a CPU's waste heat, but your heat sink must be the bigger the more power you want to extract.

explanation There is no machine which converts heat into power, only machines which convert heat difference into power. In your case, that difference is the one between the CPU temperature and the environment temperature. The maximum theoretical efficiency for this process is (1 - T_cold / T_hot), so for an environment temperature of 25 deg C, a CPU temperature of 40 deg C and a heat flow of 50W you could generate 2.4 watts of electricity with an ideal converter (the temperatures are absolute temperatures in Kelvins). If you allow the CPU to reach 60 deg C, you can get up to 5 watts, and if you allow 100 deg C, you can get up to 10 watts. Real-life heat-to-power converters are more inefficient, especially thermoelectric elements. I'd recommend a stirling engine, which is closer to the ideal efficiency.

This is how heat flows with a passive heatsink:

The CPU-to-Environment junction has a thermal resistance, measured in Kelvins/Watt, directly equivalent to how electrical resistance is measured in Volts/Ampere. You might have encountered Kelvin/Watt values in some datasheets. An ideal heatsink has zero resistance, so the temperature difference is 0 and the CPU operates at environment temperature (25 deg C). With a real-life heatsink of 0.5K/W and a heat flow of 50W (the CPU generates 50W of heat), the temperature difference is 25K and the CPU is at 50 deg C.

This is how heat flows with your proposed machine:

BTW Some overclockers go the opposite way: They add a thermoelectric element which runs in reverse, using electric power to pump heat from the CPU to the heatsink, creating a negative temperature difference. The CPU is at the cold end, and the heatsink is at the hot end.

BTW This is why nuclear power plants have enormous cooling towers, which work as the cold-end heat sink.

The issue with thermoelectric generators is they are horrendously inefficient.

For a CPU you HAVE to get rid of the heat they produce or they melt down.

You could hook up a peltier module and extract a small amount of electricity from them but you would still need to dissipate the remainder of the heat via a classical heat exchange method. The amount of electricity generated would likely not be significant enough to warrant the cost of the setup.

You CAN also use peltiers as coolers. However, you need to ADD power to pump out the heat. That power then needs to be dissipated along with the heat you are removing via the heat-exchanger. In the end the latter needs to be larger so your net effect is worse.

Heat to power is a "holy grail" idea and is up there with cold fusion as a theoretical dream.

Efficient DIRECT conversion from heat to electricity is a "holy grail" idea and is up there with cold fusion as a theoretical dream.

For generating electricity, you want the hot side (processor) to be as hot as possible for maximum efficiency. The thermal generator slows down the movement of heat as it extracts energy from it.

For doing computation, you want the processor to be as cold as possible. Higher temperatures increase the electrical resistance of the silicon. This is why you have highly-conductive heatsinks, fans etc: to move heat away as fast as possible.

These requirements directly contradict one another.

Surprised that nobody else has mentioned this:

Generating electricty from the waste heat from some process that burns fuel can make sense. Generating electricity from the waste heat from a system that is powered by electricity in the first place? That makes no sense. If it's possible for you to save energy by doing that, then it's possible for you to save even more energy by building a system that uses electricity more efficiently in the first place.

The laws of thermodynamics state that putting together two energy sources of the same temperature don't equate to a higher energy level. For example, putting pouring a cup of hot water into another cup of hot water doesn't make the combination any hotter than the separate cups.

Heat is also one of the lowest forms of energy in that there is very little you can do with it. Electricity can run circuits, wind can create mechanical motion, but heat can't do much beyond putting more energy into a fluid or solid.

That said, the most feasible method of getting energy from heat is boiling a fluid (water for instance) to turn a turbine. Putting multiple heat sinks together and attached to a tub might make water boil if the CPU's are all above 100 C. But, as you can probably infer, this is a terrible idea.

Funny thinking, but no. Your CPU is not just a chip, there are bonding wires and a casing involved which would not exactly stand a chance at 1000°C.

That aside, there are still some laws of thermodynamics to be considered. You still have to put in a huge amount of energy into the system to get very little out. The Peltier element you are referring needs a big dT (difference between cold and hot side) so simply removing the heat sinks will bring up the "cold" side to the same temperature as the hot side, so no more energy to be gained here, you'll need to cool the cold Side which will ruin the efficiency even more. On the other hand those Peltier elements can be used to generate a temperature difference as in cooling the CPU.

In theory, it is possible. All you need is some "substance" that generates electricity when one of its surfaces is at 40c and the other is at 20c.
Currently, there are thermocouples that do exactly this (change heat to electricity), but at a much higher temperature.

Not the answer you're looking for? Browse other questions tagged heat cpu heatsink or ask your own question.

7
Effective MOSFET cooling
112
What limits CPU speed?
30
Optimize heat sink design - connect cooling pad on PCB backside by vias
16
Copper or Aluminum Heatsink?
28
Why aren't CPUs cooled from below as well as above?
0
What thermic insulation to use on a heat wire?
16
Why does only the tip of the electrode melt when arc welding?
15
Why are electrically insulating heatsinks so rare? Is it just cost?