Why do inductive and capacitive reactances have opposite signs and why don't they cancel out each other?

For example, in a series RLC circuit with an AC source why is total reactance inductive reactance minus capacitive reactance? I don't need any mathematical proof. What is a logical answer for that?

The picture below is a particular example of where the inductor and capacitor currents have the same magnitude (electrical resonance) and, are opposite by 180 degrees (one leads by 90 degress and the other lags by 90 degrees): -

The values in the above example produce equal magnitude currents at 1kHz.

If you put them in parallel across the same 1 kHz supply, the currents would exactly cancel and there would be no current taken from the supply. This is the AC analysis and is called parallel resonance. Just in case you cannot see that, here is a picture that makes things a little easier on the eye: - 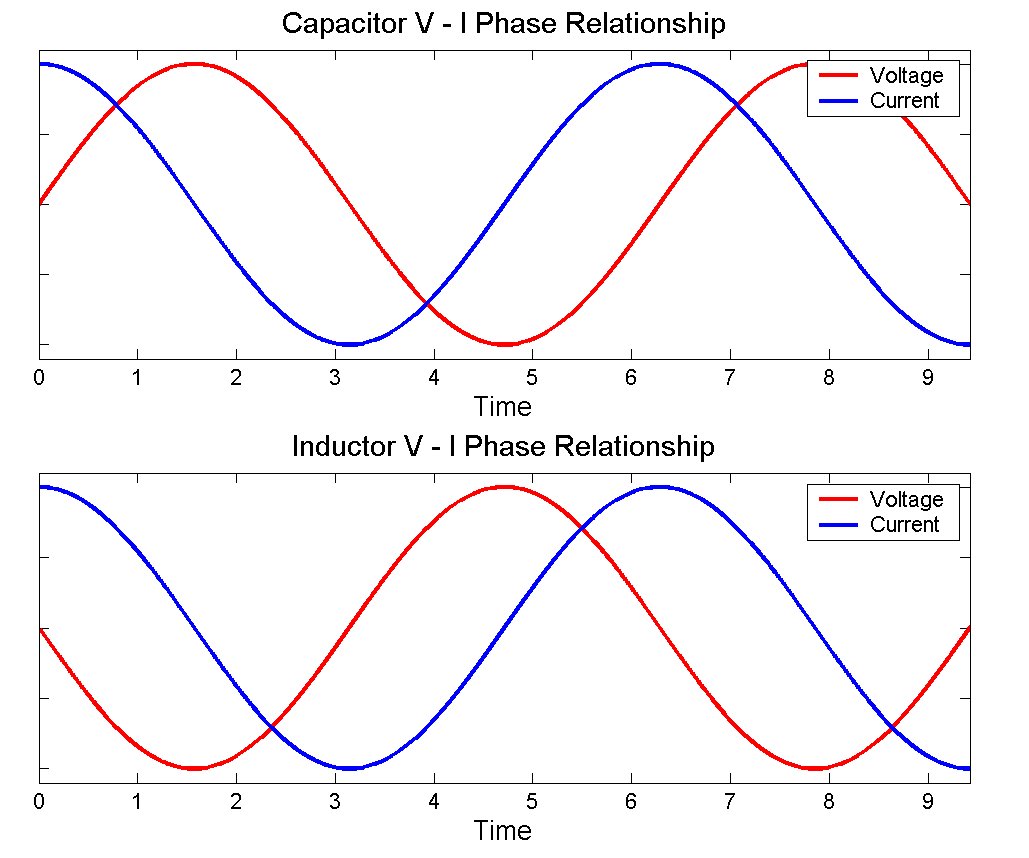 Hopefully, if you look at the upper and lower red sinewaves you should see that the two currents are exactly antiphase (180 degrees apart) and the net current is zero.

When you have two series voltages that are exactly out of phase by 180 degrees the net voltage across the pair is zero. Can you see this?

It's the same with two batteries - if you have two 9 volt batteries connected in series but one is the wrong way round, the net voltage produced is exactly zero volts.

If you could make a resistor that had a negative resistance of "R" and put it in series with a conventional resistance of "R" then, the total series impedance is R + (-R) = 0. If you put those two resistors in parallel you would get infinite resistance. You can check this easily by using the "product over sum" calculation for parallel impedances/resistances.

Not the answer you're looking for? Browse other questions tagged impedance reactance or ask your own question.

0
Capacitive reactance
0
Adding phasers in a parallel circuit problem
0
How to calculate inductive and capacitive reactance?
0
Proof of formula to convert from parallel to series impedance
1
Simple impedance calculation question
0
When finding impedance of an RC circuit, why do you multiply with \$-j\$ and not \$j\$?
1
Peak Current vs RMS Current when calculating Reactance
20
Why is impedance represented as a complex number rather than a vector?
3
Definition of RLC resonance frequency
1
How to relate resistance/reactance to parallel/series equivalent circuits?