Can somebody enlighten me on when and how much current flows in/out of the supply and/or ground leg of an opamp?

What happens if there are resistors in those legs?

Update 1: Here is the circuit that sparked my curiosity: (from the opamp's datasheet) 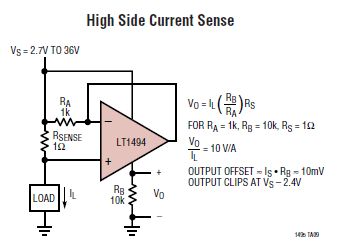 Thanks to Jason's answer I understand how the circuit works to create the output but I am not clear on how the clipping voltage can be found.

Also: why does clipping occur at all - rather than the opamp just switching off due to a supply range that is too small?

I.e. The max sink current is 500µA. Assuming a very large Isense, this means max(Vout) = RB*500µA: this can easily be 5V. Assuming Vsupply = 3V, this should push the supply range quickly below its required minimum and switch off the opamp. - Resulting in a on/off oscillation, no?

There is no ground leg of an opamp: there's a positive and a negative supply rail, and the current through each of them is roughly as follows:

I say "roughly" because there are two other factors:

What happens if there are resistors in those legs?

Then your supply voltage will vary somewhat due to the IR drops, depending on load current. Don't do this without two things:

Here's the schematic of the good old LM741: 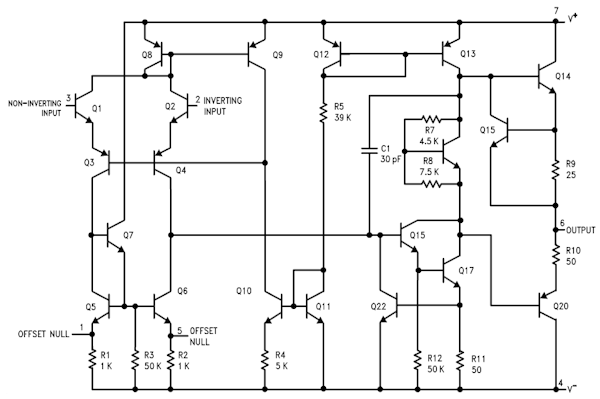 You can see a number of (current) paths from V+ at the top to V- at the bottom. The sum of all these currents is indicated in the datasheet as supply current (page 4). That's the current with open output.

Placing resistors in series with V+ and V- will cause a voltage drop proportional to the current through V+ and V-, resp. If you make abstraction of the (nearly constant) supply current you can measure the output current this way. If the output signal is a sine the resistor at V+ will show the positive half of the signal, the resistor at V- will show the negative half. This is used in the following amplifier: 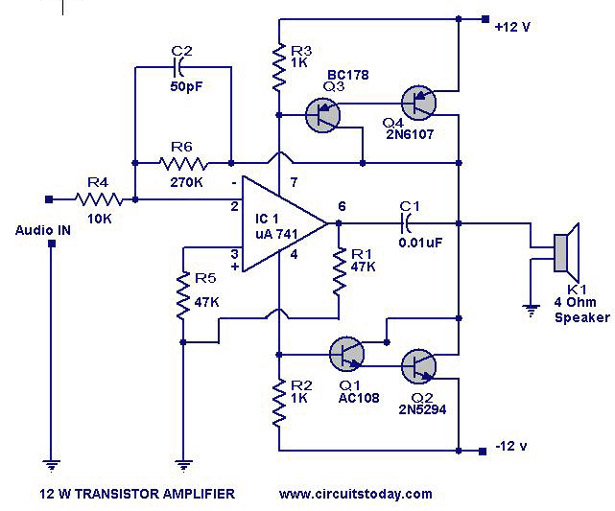 When the opamp sources current this detected by R3, and the voltage will drive Q3/Q4 so that the current sourced by the opamp gets amplified. The same happens for the negative half of the signal, which is detected by R2, and amplified by Q1/Q2.

3
How do I condition a signal with an op-amp that needs a negative rail where one is not provided?
5
How to stabilize a control loop for an opamp-based linear regulator?
2
Need help with OpAmp and FET choice for a VCVS
1
Input range of operation amplifier
1
Amplify 0 to 3.3V input to +/-3.3V
0
How to calculate an op-amp's current usage based on datasheet's supply current and its Vout terminal?
0
What should be the Vout for a CM-driven amplifier?
3
Programmable gain Transimpedance amplifier for 4-5 decade resistance measurement using Pulse voltage/current
1
Supply voltage for opamp in a current sink circuit