Energy usage of LEDs (always lighting and dimming vs always on)

I'm going camping and have lots of LED string lights connected to their own little solar panels. I need to make sure that the lights run all night and was curious how LEDs and these electronics might work. I'm curious on ideal lighting mode because I have the thought in my head like "it's less efficient to turn off a car engine at every stop light than to just leave it running." So is there any way to know if the lights will last longer if:

1) they are overall on less or less bright than fully on? There options for dimming and brightening constantly or flickering etc. Either of these modes will have the lights less lit overall than option 2.

2) they are on full brightness all night? Does it cost more energy to control the lighting modes than to leave it on?

Hopefully my question is clear. Thanks.

LEDs themselves essentially have no "memory" whatsoever, and on the scale of seconds the same is most likely true for the driving circuitry. That is, the most efficient usage is to use exactly as little light as you need at any moment.

There is a slight effect where LEDs become less efficient when hotter. Therefore, dimmer is more efficient than brighter, since there is less heat being produced. The batteries storing energy from your solar panels (I assume you have some) will also be more efficient at lower overall power.

In some other lighting systems, dimmers waste energy. This is not true for LED lighting with built-in dimming — the power supply is controlling the average current through the LEDs all the time, and dimming is just changing the target current.

In summary: to optimize for run time, turn off or dim lights as much as you can reasonably manage. There is no reason to leave on, or bright, a light you don't need.

LED efficiency drops as current increases, due both to LED physics, and efficiency decreasing with temperature. 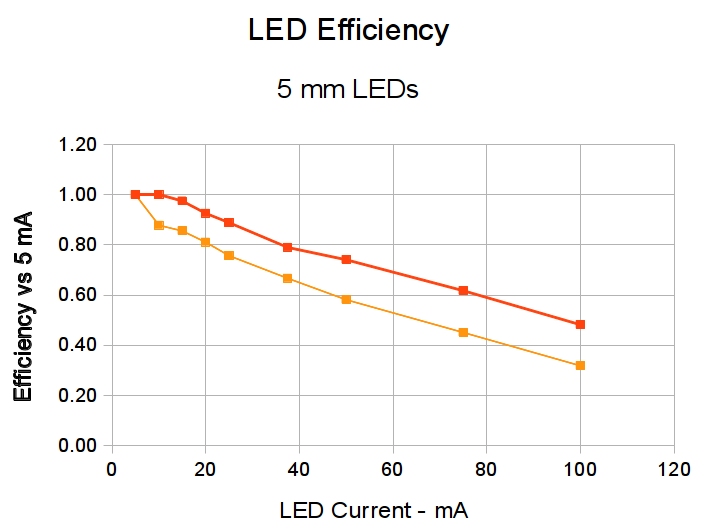 Some LEDs fare better than others in this, especially the high-power ones. Proper cooling is very important. A cool LED is more efficient than a hot one.

Current matters, too. A LED operating a 10mA will always be more efficient than a LED driven at 100mA with a 10% PWM duty cycle, but the real question is, by how much?

Designing a constant current source which maintains high efficiency over a wide range of currents is both complicated and expensive. It gets worse as you extend the current range downwards. For example, if you want your flashlight to be efficient at 1% power, which is usually enough to read a map in the dark, then you got two choices:

The former is easier and cheaper, as you can shut it down during most of the period. But it could flicker.

The latter is more difficult, as the whole circuit has to be working and in regulation all the time, and its idle current has to be very small in order not to destroy the low-power efficiency.

In the end, the extra money invested in a smarter driver might purchase better run time if invested into more batteries instead.

Here's a simple, low-tech solution to your problem:

Use several LED sources. You could have a high-power one when you need it, and another one optimized for low power. If you use LED strips, then you could use several, and switch some/all of them on.

Human eyes perform remarkably well in low light, as long as you do not look into something bright and exhaust the rhodopsin pool in your eyes' cells. Your night vision cells are most sensitive in the color of moonlight (around cyan). You can see your feet and the path ahead with a single 5mm high brightness LED running at 1mA.