So my problem is i have 3 Hot DC lines that normally will only have one powered at a time, but if more then one powers on at once i want only one of them to pass through since they are used as triggers, something like so, apologies if the diagram is rough, still learning how to draw them instead of just read.

So that the line with the higher letter will be the single one that passes through.

So if only C is powered it will pass, but if C and A are powered only A will pass, and if only B is on, it will pass fine, but switch to A if A also comes on, and so on and so forth.

Is this possible, and if so is it a simple component that already exists, or will I need to make a small circuit for it?

Anything that can point me in the right direction for more research would be much appreciated, but i don't know what terms to look up on here or google to find out more, even knowing what to google would be of great help since then i could seek the answer.

PS: Extended diagram if it helps

Getting power from any of the three lines should turn the screen on, but which line gives power to it's own trigger will decide what displays since i have the triggers tied to the cameras that display, hopefully the diagram has the diodes point in the right direction, but they would just make sure the power wouldn't flow backwards and energize all the triggers.

This might be to much detail but ti said be as specific as possible so maybe this will matter.

Thanks in advance, Lin.

Clarification Edit: This is for a turn signal and backup camera system, normally only one signal would go through at a time, Reverse (A) Left (B) or Right (C) but i want to make sure in some situations when multiple sources are on, only one passes through based on a simple priority.

So if my Hazard lights are on, they will because of my underlying wiring, be sending power through both wires B and C, and if that happens I want to stop power from C so only power from B gets through.

If the car is then put in reverse with the hazard lights on, power will be coming from A, B, and C, in which case i wont to stop flow from B, and C, at the Priority box, and only allow A through.

Similarly if i'm backing up with the Left turn signal on, Wires A and C will both be live, and i want to block power from C at the priority box, and only allow power from A through.

After the box, my triggering all works well (I tested by manually switching power) but what I need is to have it switch automatically based on that pre-set priority between wires A, B and C.

But i have little to no idea how to go about making something that would block or allow power to flow through based on that pre-set priority.

The hope would be the power that passed through the Priority box, would be a solid 12V (ish, just whatever was going into it) hot wire until the initial wire De-energizes, it dosn't need to pulse or do anything fancy, just allow only one signal through, and chose which signal based on a pre-determined priority.

This is all being done with 12V DC (though I have had readings as low as 10V and as high as 13.5V if that matters)

If this still is unclear let me know, I just don't know enough to know what needs clarification, but will do my best and appreciate any and all help.

Again even the names of types of components to research would be of huge aid. 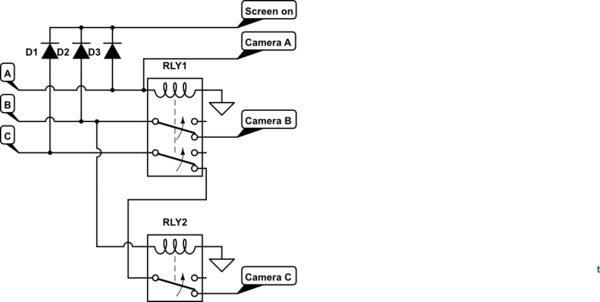 I Believe i have found the answer and will post it here so anyone who finds this Via searches will be able to benefit.

This may not be the best way, but it is certainly a way.

Using a Series (Correct term?) of Relays this is achievable, and in-fact expandable to work for more wires. 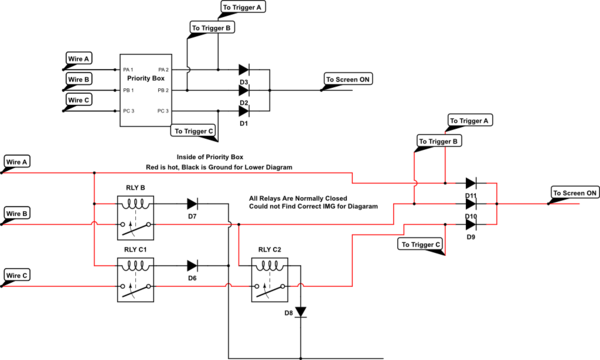 As noted in the diagram the Relays are normally closed, however i could not find that symbol in the library.

If anyone sees any errors in this, please comment and i will address them.

Not the answer you're looking for? Browse other questions tagged dc input switching or ask your own question.

0
How can I switch power between two hard drives using transistors?
0
AC and DC signals
0
Relay or switch that can remotely power OFF and automatically power ON
1
How to turn on a device with only 1 wire between itself and switch?
2
Multiple MOSFET based AC switching circuits on the same supply
0
Can latching relay make the switch if the coil is powered by either of its switching circuits?
2
In an audio circuit, with an LM386 chip - how does the DC electric power and the AC audio work?
0
Controlling speed of 7 DC motors from Arduino 101 using PWM outside of the audible range
0
What is the proper way to ground this DC circuit?