What are some ways to extend life of Nixie Tube?

I'm working on a Nixie tube clock and have read that nixie tubes have a life of about a year.
Does anyone know of ways to extend the lifetime of a tube?

Can you use a mosfet to switch the high voltage power supply using PWM or would that just end up delivering a lower average voltage?

Specifically I'm using IN-14 Tubes, and plan on driving them with 170VDC, 3mA.

Any input is appreciated! Thanks!

lifetime nixie
share|improve this question
asked May 2 '12 at 10:23

Not all are created equally. Also note your spec final page end.. to operate all elements if not in use for extended periods... 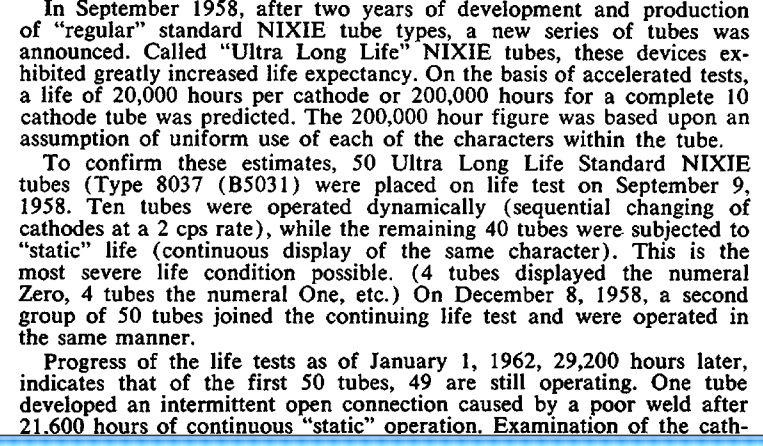 Suggest a sleep mode to disable display if inactive on 0000000

Also reduce cathode current to 1.5mA and Cathode voltage to 170

I just "repaired" 3 failed IN-1 nixie tubes with a low-voltage power supply. There were 2 numerals shorted together, for example when '1' is powered, both '1' and '6' illuminate. And yes, if '6' was powered, I would get '1' and '6' as well. Using an ohmmeter I found about 5-10 ohms between the numerals. It should be infinite. I suspected a small metal whisker formed between the 2 numerals, so I applied a low-voltage across the 2 digits, and as I slowly increased the current I saw a small incandescent glow. The whisker vaporized between 100 and 300mA. Now all 3 tubes illuminate correctly.

Now, regarding the 2 tubes that only had a failed '1' numeral. Wanna take a guess ? That's right! The '1' cathode was shorted to the anode as confirmed with an ohmmeter. These took a bit more current to repair, on the order of 400-1200mA. They too are working now.

The big question is how long will they operate now; will they fail again ?

I will dissect the last failed tube to see if the failing numerals are adjacent to eachother, to confirm my suspicions.

I've read from a few sources that the ionization voltage increases with age, so the solution is to use a higher supply voltage along with a larger dropping resistor (to keep the current the same).

Keeping the current at nominal rating will result in less age degradation versus running at or above maximum current.

From my own experience, I see wildly different reliability for different tubes. I have three 6-digit nixie clocks using Burroughs 5092 tubes, and after 1 year of continuous operation there have been zero failures for 18 tubes. Many of these tubes are 50 years old, and they still illuminate perfectly.

In contrast, I have another clock with fifteen IN-1 tubes, and after 1 month of testing, I have had 6 failures (1 completely dead, 2 have a dead '1' numeral, 3 are leaky and have two numerals illuminated at the same time).

IN-14 are unlikely to have reliability problems. They are mercury doped tubes, and therefore automatically designed as "long-life" tubes. The violet tinge on the digits is a tell-tale sign. IN-14s are rock solid.

Even IN-1 (not doped) can be used successfully, but you have to take more care with them. I have found that judicious dimming (via PWM) and blanking (turn the digits off when not in use) can increase the life if IN-1 considerably. I run 3 IN-1 clock 24/7/365 and have had 1 failure out of 18 tubes in just over two years.

Not the answer you're looking for? Browse other questions tagged lifetime nixie or ask your own question.