Why can't potential divider be applied to calculate potential at Base Node in this circuit?

I have a self biased NPN transistor circuit as in the picture below and I want to calculate the base voltage Vb. The most common intuition leads me to apply potential divider and calculate the voltage, which in this case comes to be 3.529V. But whenever measure Vb, i get value near to 3.4V, which is less than what I calculate. Is there a simple explanation? 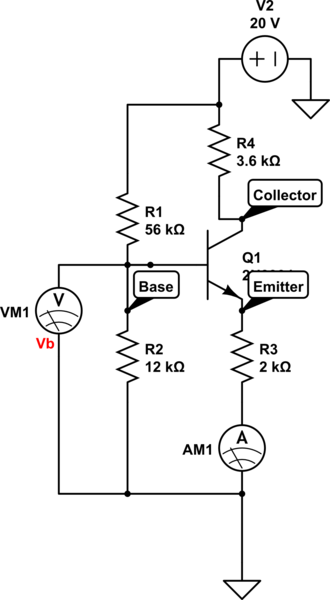 Is there a simple explanation?

The base takes some current and effectively reduces the value of R2.

This now reduces the potential divider voltage to about 3.35 volts. Given you measured about 3.4 volts, maybe the hFE of the transistor is a bit higher and maybe you also need to take account of the R1 and R2 resistor tolerances.

For instance, if you used 1% resistors and the hFE of Q1 was infinite, you could still expect to see a voltage that might be as low as 3.46 volts (one resistor at 99% and the other at 101%).

So, no, there isn't a particularly simple explanation but, it depends entirely on what you regard as simple.

You've been provided the simple answer. The BJT's base requires a small current and this effectively presents a load on the divider. This load moves the resulting divider voltage, slightly, as you've discovered. Good work doing so, by the way! (But, if you read further, perhaps I'll show you that your result doesn't even require this added explanation.)

I'd like you to take a more scientific and less engineering view, though, since you've made actual measurements. So let's make this a little more analytically concrete by applying good theory using nodal analysis. The voltage you measure there should be:

The above solves out as:

So it may seem you need to know the base current in order to figure out the base current, not unlike the old story where a lady claims that the Earth is carried about on the back of a turtle and, when queried about what the turtle then walked upon, she replied, "You can't catch me with that trick question. It's turtles all the way down!"

But it's not as bad as it looks. One reason why is that \$V_{BE}\$ doesn't vary much despite large changes in the collector current. So, often, a middling value is picked out of the air; such as \$V_{BE}=700\:\textrm{mV}\$. If the collector current varies by a factor of 10, this only changes by about \$60\:\textrm{mV}\$ in a small signal BJT. Not that much. This is one big saving grace here.

So (without getting mired into more complicated theory right now) you really can just make an estimate of \$V_{BE}\$ and move forward. Almost all BJTs are silicon, these days, and most of them are operated somewhere near \$V_{BE}\approx 700\:\textrm{mV}\$, in practice. (Not all, though. So if something doesn't make good sense using that approximation, then it may be because the assumption has failed in that circumstance.)

Your actual measurement is within this range, so it is reasonable given that you don't know the BJT's DC parameters and don't know the exact values for your resistors.

This highlights something else, though. Do you recall that you computed a voltage of about \$3.53\:\textrm{V}\$ for your voltage divider, without taking into account the base current??? Do you see the above range, just computed here? Even your unloaded voltage divider value comes within that range. This means that you were making too much out of the difference you found when you measured \$3.4\:\textrm{V}\$ at the base. Within the possible error bounds due to your lack of knowledge about actual resistor values and actual details about the BJT, there is no way for you to know whether or not your measured value was sufficiently different from prediction to require an as-yet unaccounted for added effect (such as the base current loading.) If you didn't know anything about a BJT and were only "guessing" that it might have an impact, your measurements (given what you know about your actual circuit) would not let you decide this issue.

This is an important result to keep in mind. You haven't shown a significant variation vs theory, so you haven't shown a need for a better explanation. It is sufficient to say that you measured a resistor divider value that confirms the theory of resistor dividers and that you cannot discern anything further here (such as a BJT base current loading effect.) Your knowledge about the circuit is insufficient to say more and this means you need to investigate further and acquire some additional measurements before you can suggest that there is another explanation needed (such as the base current loading effect.)

Note also that if your meter were inaccurate enough, and/or if the meter itself changed the circumstances enough, then you also would not have been able to even discern a question for that reason alone. This is normal in science research, too. Often, limitations in the ability to measure will obscure important discoveries for a time and it is only after the development of more precise and accurate equipment that scientists can uncover a new effect that needs to be investigated and understood better.

12
Which resistor for NPN transistor base?
10
Why can't you go sticking a voltage across the base-emitter terminals in a transistor?
3
Strange LED behaviour
0
How to calculate the base-current of this transistor?
0
How can I prove that the NPN BJT is in the active region?
1
Why does this transistor circuit light the LED?
0
Voltage Divider Configuration of Transistor