Should I remove terminating resistors in ethernet TAP? 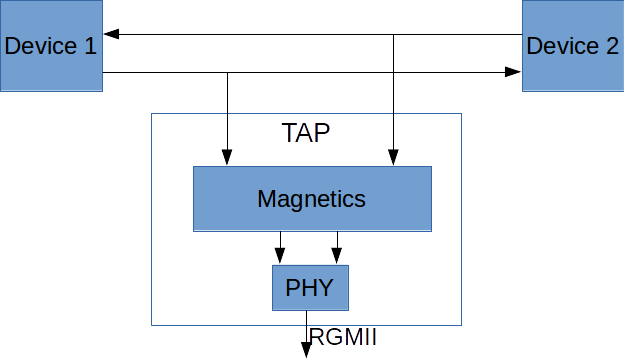 My device will be between two connected devices. It will listen to their traffic, without interrupting it. There are a lot of different PHY chips, and different circuits between chip and RJ45 connector, like in this question, but commonly there are 75 ohms terminating resistors on the network side, and 50 ohms terminating resistors on the chip side. My question is – should I remove this 75 or 50 ohms resistors in this case?

You can try a scheme like this, but you may degrade the signal by adding noise and because you are splitting the transmission line and adding an additional load on the line. This would cause problems if you listen in on a long section of cable or fast signals.

If you did remove the 50Ω termination, the line would be imbalanced, you would experience more noise\bit errors. I would leave them on.

But its possible, you can build exactly what your describing with regular internet cable called a passive tap (and they plugged a regular NIC in so the magnetics and termination resistors were there). This configuration will degrade the signal and violate ethernet specs.

However, tapping will not work with Gigabit Base-T

To transport 1 Gbit of traffic full duplex (1 Gbit in each direction simultaneously) a very complex signal is used to reach the desired performance and quality. In case of Gbit Ethernet the signal is called PAM 5 modulation, meaning that each cable pair transports 5 bits simultaneously in both directions. The PHY chips at each end of the cable have a very complex task at hand, because they must separate the two signals from each other. This is only possible because they know their own signal, so they can deduct their own send signals from the mixed signals on the line and then interpret the information sent by their link partners.

I have seen people build taps with two phys on a gigabit with an FGPA, the system also had relays to keep the connection always on and then passed traffic through a phy to an FPGA and then back out to a phy when the tap was on an monitoring traffic.

Not the answer you're looking for? Browse other questions tagged ethernet magnetics termination phy or ask your own question.

9
Ethernet: distance from PHY to magnetics
1
What do pull-up and pull-down resistors do in an ethernet PHY?
3
Why use discrete Ethernet transcievers?
5
Design ethernet switch for multiple devices on pcb?
0
A few questions about the application of ethernet controller and PHY chip and SFP module
2
The SERDES/transceiver design inside the Ethernet MAC controller
1
Terminating Resistors on Ethernet Port