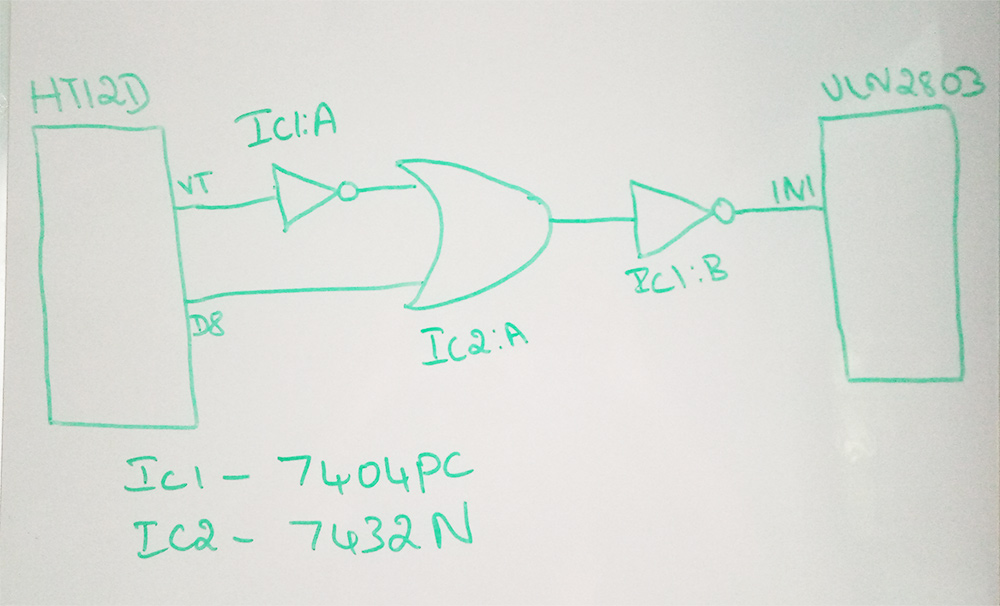 I have been recently working on a RF operated water pump project. For this purpose i bought a RF RX and TX module which has HT12E and HT12D chips as encoder and decoder.

The D8 (Dout) pin of decoder is latched output and power on state is active low so whenever the circuit is powered off and then turned ON again it automatically gives output in D8 pin and in turn drives the water pump. I don't want that to happen.

In order to eliminate this i thought to use VT pin which is momentary and indicates whenever valid data is received from TX. So i built this simple set up using the logic gates i have. Even though the auto ON of water pump is eliminated, now the output to ULN2803 IC is not stable and the water pump keep on switching ON/OFF and when ON the motor speed is considerably low.

From searching in internet i found that it is due to the instability of VT pin and also when I checked the logic level in VT pin, it keepsRF on changing.

The VT pin only goes high when a valid transmission is being received. If the received signal is noisy (which it will be unless the transmitter and receiver are close to each other) VT will randomly drop out during transmission. And you should not be transmitting continuously anyway, so if you want the pump to stay on then you need a latched signal.

power on state is active low so whenever the circuit is powered off and then turned ON again it automatically gives output in D8 pin and in turn drives the water pump.

The obvious solution is to make the pump turn on when D8 is high, not low. However transmitters using the H-12E usually have buttons that produce a low output when pressed, in which case you would have to modify the transmitter to make the button produce a high signal. Modifying the transmitter may not be an option, so...

If one of the other data outputs is not being used you could connect IC1a to it, then when a transmission is received that data output will go high (and stay high) because its button is not being pressed.

If all the other data outputs are being used then you will need an external latch which is reset when powered on and set when VT goes high. Something like this:- 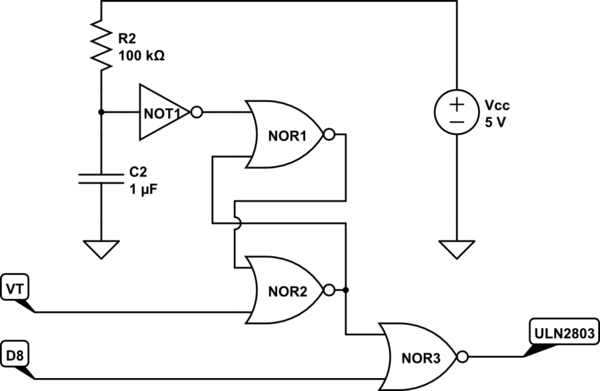 NOR1 and NOR2 form an SR latch which is reset via NOT1. At power-on C1 is discharged so NOT1's input is low. C1 then charges through R1 producing a high level which terminates the power-on reset pulse.

When VT goes high it sets the latch and gates NOR3 on. NOR3 then passes the level on D8 through with inversion. All this can be done with a single Quad 2-input NOR IC (eg. 74HC02).

Not the answer you're looking for? Browse other questions tagged rf logic-gates transmitter logic-level decoder or ask your own question.

1
Can I use this rf module with HT12E and HT12D?
1
Why almost all decoder zero selected output?
1
How do I implement F using one 4-16 Decoder and a NOR gate?
1
Number of output by decoder
0
Get rid of a decoder
5
Understanding Address decoder
0
Decoder with many output combination
0
inverting address decoder with low after high
0
AD725: is it dot crawl - and what to do about it?
1
Troubleshooting SC2262/2272 RF module interaction Arduino