Is this a reasonable design for a high-speed level shifter?

I designed this circuit in Falstad CircuitJS, and it seems to work quite well in the simulation. (Click the link for a demo) 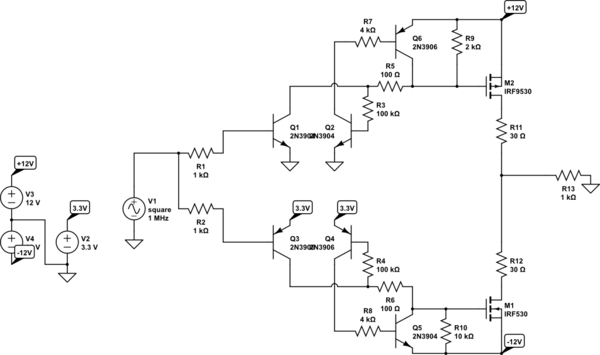 CircuitJS shows it working acceptably at up to 50MHz - though at that frequency I'd expect I need to simulate more parasitics, and I don't need that level of performance anyway.

Is this design more complicated than is needed for its purpose? It seems like quite a lot of components. Have I made any beginner mistakes?

At high frequencies the gates do not recharge quickly enough through R9 and R10, causing excessive power dissipation when both M1 and M2 are turned on. To alleviate this I added Q6 and Q2. When Q1 turns off, the gate starts charging through R9, and when it reaches Q2's threshold voltage, Q2 turns on, which turns Q6 on, which very quickly recharges the gate. .A separate inverter could have been used to control Q2, for another small improvement, but it would add even more complexity. R9 is smaller than R10 because the top half has less voltage to work with (12V instead of 15.3V) and I found this made a surprisingly large difference in the turn-off time in the simulation.

Note the part numbers (IRF9530 etc) were added by CircuitLab, and aren't specific components that I plan to use.

Although some consider this useless, I love this king of hobby projects, where you go down to the basics of electronics.

I think there is an issue with your circuit: V1 won’t raise instantly from 0V to 3.3V (and won’t either drop instantly from 3.3V to 0V). When it will be at 1.65V (and in fact roughly anywhere between 0.6V and 2.7V), both Q1 and Q3 will be on. As a consequence, both M1 and M2 will be on, causing an excessive power dissipation.

The biggest problem with your design is that the circuit is non-inverting ie. high level at the input pulls the output high while RS-232 requires inverting action. If you really need to play with output voltages try an IC like MC1488.

Not the answer you're looking for? Browse other questions tagged mosfet level-shifting mosfet-driver or ask your own question.